Serena Williams twerks in her own music video 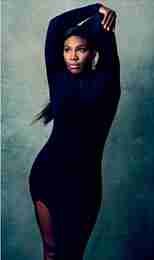 NEW YORK – Serena Williams turned heads when she made a cameo in Beyonce’s Sorry music video -where she twerked heavily- and now the tennis star is releasing her own dancing video.

Williams, who released a new video Thursday on YouTube that features the 34-year-old dancing in a variety of styles, says dance is one of her favorite hobbies.

Williams is currently battling a shoulder injury, but said the dancing she filmed did not involve her shoulder. The top-ranked athlete began her bid for a record-breaking 23rd major title in the U.S. open this week.

On the video set last week in Brooklyn, New York, she said she was “just moving more or less my legs. Right now (my shoulder is) doing OK. I’m taking it day-by-day.” “I work really hard at what I do. I’ve had some ups and downs this year but you know …I always just try to come back and do the best that I can,” she added.

Williams worked with choreographers Will “Willdabeast” Adams and Janelle Ginestra for the video along with Delta Air Lines. She said she remembers learning a great deal about dance from Beyonce’s team of choreographers when she filmed Sorry, which appears on the pop star’s visual album, Lemonade.

“Dancing in the Beyonce video was obviously a lot of fun. I remember being super sore after because I was down the whole time, you know, kind of twerking a lot,” she said. “I was able to work a lot with her choreographers …and I really learned so much just about my body movement and also different styles of movement to do.”

Next post The beauty and tragedy of The Light Between Oceans