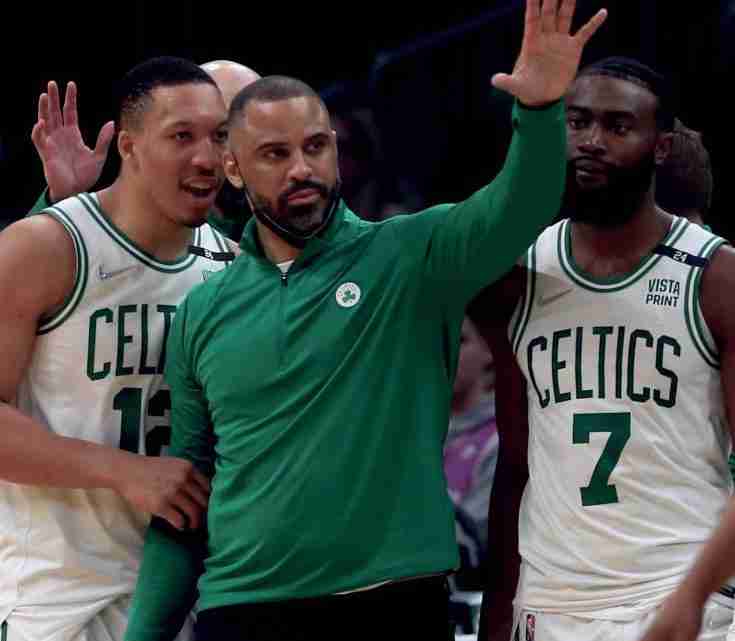 Miami (AP) — He grew up in Portland, basketball in his blood. Wasn’t exactly a big-time recruit before eventually playing some college ball in the West Coast Conference. Took a circuitous route into coaching, guided along the way by one of the game’s legendary sideline bosses. And last summer, he was part of the brain trust that helped USA Basketball win Olympic gold.

That is Erik Spoelstra’s story.

That is also Ime Udoka’s story.

The Miami Heat won the first game of this year’s Eastern Conference NBA Finals against the Boston Celtics, 118107 over at home on Tuesday, in another stellar team performance led by the continued scintillating playoffs play of Jimmy Butler.

It’s still early in the best-of-seven series, given that the Boston was without key players Marcus Smart and Al Horford, and Miami point guard Kyle Lowry’s hamstring still has him dayto-day. But Butler outdueled Jayson Tatum with 41 points as the topseeded Heat imposed their will on the second-seeded Celtics after halftime.

The series kicked off against the backdrop of the enormous respect between the two head coaches, who have known one another for decades and have deep ties. Spoelstra coaches the Miami Heat, Udoka is in his first season coaching the Boston Celtics, and one of them will represent the Eastern Conference in the NBA Finals.

“We have great respect for what they’ve done during the regular season, to develop the right habits,” said Spoelstra, now in his 14th season after taking over as Miami coach for Hall of Famer Pat Riley. “And like I said, this is the way it should be – the two teams that played most consistently at the top of the East for most of the year, and we’re meeting in the conference finals to figure it out.”

The Heat needed five games to get past Atlanta in Round 1, then six games to oust Philadelphia in the East semifinals. Boston swept Brooklyn in Round 1, then ended Milwaukee’s reign as NBA champions by finishing off a seven-game series win in the other East semi that ended Sunday.

It’s a rematch of the 2020 East finals, held in the restart bubble at Walt Disney World, when Miami topped Boston 4-2 to earn a berth in the NBA Finals. That was the third East finals loss in a four-year span for members of the Celtics – and many of the players from some of or all those defeats, such as Tatum, Jaylen Brown and Smart, are Boston’s core today. “ This is the group I feel like is poised enough to get it done,” Brown said. “I feel like everything that we’ve overcome – all these battles and challenges and adversity we’ve been through this season, as well as the challenge that we just had overcoming the defending champions – I think that we are prepared. I think we’re ready to take that next step. We’ve just got to go out and take it.”

For its part, Miami – seeking a seventh trip to the NBA Finals and what would be a sixth in the last 12 seasons – isn’t looking back at the bubble win or much of anything else, All-Star forward Butler insisted.

“We just want to focus in on today, right now, the group of guys that we get to go to war with every single day,” Butler said.

It’s a little different for the coaches.

Udoka remembers meeting Spoelstra when he was a kid – at 44, Udoka is seven years younger than Spoelstra – and watching him play in pro-am runs alongside other Portland basketball legends like Damon Stoudemire. Udoka played against Spoelstracoached Heat teams four times before becoming a coach, spending the bulk of his years as an assistant under Gregg Popovich in San Antonio.

Hence, the Olympic ties they share: Popovich was USA Basketball’s coach in the last Olympic cycle, and asked Udoka and Spoelstra to be part of his circle of confidants for that journey.

“He’s always had success,” Udoka said of Spoelstra. “One of the best coaches in the league, in my opinion. It’ll be a task for us because he has his team well-prepared, hard-fought, Heat Culture mentality. I got to know him on a more personal level in that time spent in Tokyo in preparations for the Olympics, but I’ve known Erik for a while.”

They’ll know each other a little better after the next couple weeks.

Boston won the regular season series 2-1; the Celtics went 1-0 at Miami and the teams split two games at Boston.

Miami has won 13 of the 23 previous playoff games between the franchises.

Of the players Miami gave minutes to in the 2020 East finals, only four — Butler, Tyler Herro, Bam Adebayo and Duncan Robinson – remain on the roster. That doesn’t include Udonis Haslem, who didn’t play in that series.

Heat point guard Kyle Lowry wasn’t ready to start the series because of his balky hamstring, but Miami went 4-0 against Philadelphia without him (and 0-2 with him trying to play while still clearly laboring).

Smart has a mid-foot sprain. Horford was lost to COVID-19 protocols hours before the game

Brown averaged 24.7 points in the regular season series between the clubs. Butler averaged 22 per game and Miami’s Max Strus – who has had an excellent postseason, his first as a starter – went 13 for 26 from 3-point range in his two appearances against the Celtics.

FanDuel Sportsbook lists Boston as the favorite to win the series.

Golden State is FanDuel’s favorite to win the NBA title, followed by Boston, Miami and Dallas.

Next post Landmark police standoff: ‘Hold Your Fire’ in Brooklyn