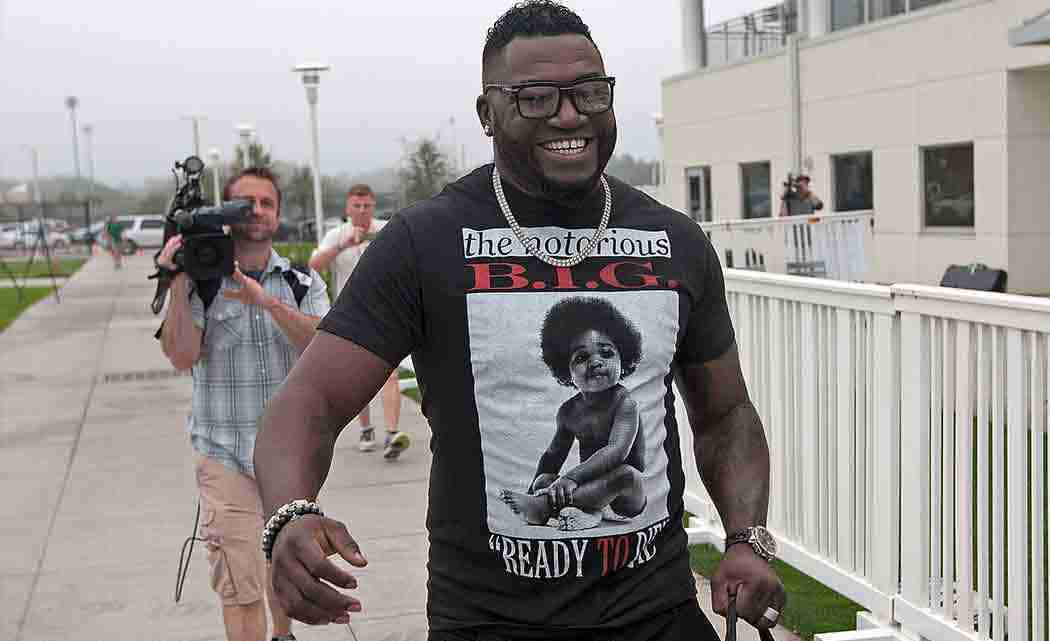 Ortiz, the final player on the 40-man roster to report, wore black-framed glasses and was dressed in a black T-shirt with black jeans. He gave hugs and handshakes to many of his teammates and front office personnel.

“It’s like that every year, I think, everybody anticipates him showing up,” Boston pitcher Clay Buchholz said. “When he does, it’s usually with a new haircut and different shoes and different pants, but he always comes in looking like David Ortiz, and that’s the best part about him. Everybody loves being around him and loves him being around in general. He’s just a good guy to have in your clubhouse.”

Signed as a free agent in 2003, the 39-year-old Ortiz is the longest-tenured player on the Red Sox. His arrival brought a buzz to Boston’s clubhouse.

“I think anytime David walks into the room, it lightens it up and brings it energy,” Boston manager John Farrell said. “He looks in great shape. I had a chance to talk to him earlier when he got in here and he’s full go in everything we want to do.”

A few hours after he arrived, Ortiz headed to a back field and took batting practice with a group he called his three amigos: Sandoval, Hanley Ramiez and Rusney Castillo. With fans watching, players joked and laughed between turns hitting.

“They’ll be a lot of life around them. I know that,” Farrell said. “This will be a lively group.”

Ortiz also tweeted a selfie of himself with Ramirez and Sandoval.

A career .285 hitter with 466 homers and 1,533 RBIs, Ortiz joined Hall of Famers Ted Williams and Carl Yastrzemski last season as the only three players with 400 homers while playing for the Red Sox.

General manager Ben Cherington expects him to finish his career with the club.

“I think David knows he’s going to be a Red Sox as long as he wants to be a Red Sox,” Cherington said. “We’re just happy that he’s here. He’s been a huge part of what we’re doing still on the field. Given his stature and his personality, I know that he means a lot to people off the field, too. He’s part of the Red Sox legacy and a Boston pro sports legacy, but he’s also a DH and hits in the middle of our lineup and that’s what we’re focused on. We’re happy to keep him there as long as he can keep doing it.”

Ortiz is the only player left who was part of Boston’s World Series title teams in 2004, `07 and `13. The 2013 World Series MVP is entering his 19th season in the major leagues and his 13th with the Red Sox.

“The way he plays the game and how much love he has for the game, everyone respects him,” said Ramirez, who signed as a free agent during the offseason. “What can I say about Papi? You know what he does on the field, off the field, so many good things he does. We love Papi. He’s the man.”

NOTES: Farrell said no one will be limited when the full team holds its first official workout on Wednesday, including RF Shane Victorino, who missed the final two months of the season after back surgery, and Mike Napoli, who had offseason toe surgery.

Next post Homeless people need libraries, and libraries need them, too