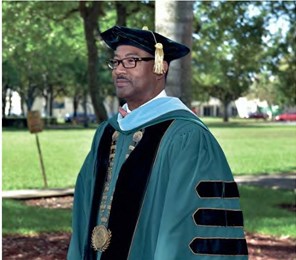 MIAMI GARDENS, Fla. – As Florida Memorial University (FMU) celebrates 140 years of service in higher education, FMU’s Board of Trustees appointed Dr. Jaffus Hardrick as its 14th president, effective immediately. The board originally tapped Hardrick to serve as interim president in July 2018. During the institution’s annual Founders’ Day observance, Miami Gardens Mayor Oliver G. Gilbert, III boldly declared, “Something is happening at Florida Memorial University. There is new energy and it is exciting.” The same sentiments have been shared by many key leaders throughout South Florida and the country. Many have expressed support for and have endorsed Hardrick as the right leader for FMU.

“Dr. Hardrick is an ambitious and visionary leader who has demonstrated a commitment to student success and academic excellence throughout his career,” said Attorney JoLinda Herring, chair of FMU’s Board of Trustees. “He brings a wealth of experience and we want to continue the momentum. It is truly a new day at FMU.”

An award-winning academic executive, Hardrick comes to South Florida’s only historically Black university with more than twenty years of experience in higher education. He worked for more than ten years at Florida International University (FIU) where he served as vice provost for Access and Success and vice president of Human Resources. Under Hardrick’s leadership, FIU earned national recognition from Forbes, Fortune, and the Chronicle of Higher Education, among other organizations. Prior to FMU, he worked at Baylor University for twelve years serving as assistant provost for Academic Affairs and vice president of Human Resources.

Since assuming the presidency, Hardrick has promoted five strategic focus areas for FMU: Student Success, Operational Excellence, Financial Solvency, Academic Quality, and Relationship Development. Hardrick identified these as key areas that will drive FMU’s success into the future. “I thank God for the opportunity to serve and lead FMU to the next level of academic excellence and national prominence. Under my leadership, FMU will be fully integrated into the greater community and focus on preparing students to compete in the global marketplace, transition to rigorous graduate and professional schools, or develop their own enterprises,” President Hardrick said. “Our five strategic principles will help us continue to transform ourselves and our community.” “A healthy and prosperous FMU is good for our diverse study body and great for this community. We cannot do this work alone. I am inviting the entire community to support our students and help us close the resource gaps that create barriers to graduation.”

President Hardrick earned the permanent post after serving as interim president since July 2018. An HBCU alumnus, Hardrick earned a bachelor’s degree in Sociology from the University of Louisiana at Lafayette; a master’s in Education in Counseling from Prairie View A&M University; and a doctorate in Educational Administration from Baylor University. He is a member of Alpha Phi Alpha Fraternity, Inc., Sigma Pi Phi Fraternity, Inc., 100 Black Men of America, Inc., a board member of the Florida Education Fund, Inc., and is an active participant in several other organizations. His scholarship has been published in the Association of Public and Land-Grant Universities, Association of American Colleges and Universities. He is also co-author of Making Global Learning Universal: Promoting Inclusion and Success for All Students (Stylus).

“While the nation talks about the relevance of black colleges, 140 years affirms we are committed and ready to serve. I am looking forward to transforming FMU into one of the nation’s premier HBCUs,” said President Hardrick. “In addition to being an economic engine in South Florida, FMU will play a key role in producing more talent for the nation’s workforce.” Since assuming the role as FMU’s interim president, the Hardrick Administration has accomplished the following, among other things, which has made a difference: • Expanded donor pool and raised more than $1.7 million in less than a year: