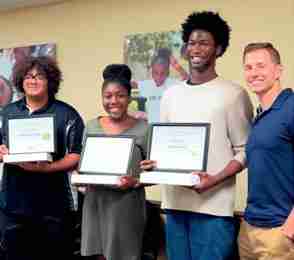 FORT LAUDERDALE, Fla. – A Fort Lauderdale non-profit with the mission to help bring joy, education and opportunity by opening the world of technology and all its possibilities to youth and their families with little or no access, has recognized four outstanding youth with its ihustle4change award. The ihustle4change award recognizes individuals who actively pursue ways to initiate positive change and make contributions to their communities and the world.

Markel Barreau, a senior at Atlantic Technical High School served Broward Youth Coalition (BYC) as communitybased secretary and augmented the organizational structure and success of BYC with his vision and work ethic. Markel was the guiding force behind opening up a BYC in his school and serves as the president of their BYC. Through his leadership, his high school was the most successful school-based BYC during the 2018 academic year. He recruited the most members to a school-based BYC, leading them with maturity and strength.

Nhadya Lawes, a freshman at the University of Miami served as the Broward Youth Coalition marketing director. Her incredibly successful management of the BYC Instagram and Snapchat accounts featuring targeted and creative posts have increased BYC’s social media presence with youth. Nhadya serves as strong and positive model for her peers. She is consistently asked to do public speaking events on behalf of United Way of Broward County, the United Way of Broward County Commission on Substance Abuse and BYC. Those who work with her note her elegance, confidence and maturity as unparalleled.

Chanice Lee, a senior who was homeschooled, is a natural born activist and wrote and published her first book at the age of 15 entitled, “Young Revolutionary: The Teen’s Guide to Activism.” Chanice also has a blog called “The Melanin Diary,” which she uses to promote social awareness among black teens through discussion of topics centered on social justice, history and politics. Her passion and mission for educating, inspiring and empowering others, shows in everything she undertakes and accomplishes.

Donald Rufus-Raphael, a senior at Nova High School demonstrated incredible growth throughout the course of his involvement with BYC. Initially a timid observer, his growth led him to serving as the vice president of the communitybased BYC in addition to the current president of his school club, called Mentoring Tomorrow’s Leaders. Donald led a workshop at the 25th Annual Youth Leadership Institute, voted the favorite workshop by the Institute participants. In 2018, Donald served as co-host at the BYC Alternative Spring Break networking and professional development event. He continues to strive to do better and recruit people to join BYC and attend Youth Leadership Institute to change the trajectory of youth to a successful path.