‘A life that mattered’ 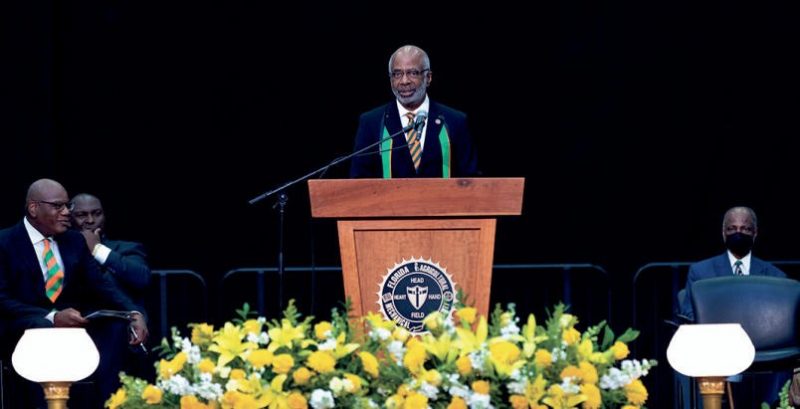 FAMU President Larry Robinson, Ph.D., who Humphries recruited to the university in 1997, lauded him “as a visionary, whose brilliance was on constant display, especially regarding his concern for students and their success.”

Humphries’ premiere scholarship program was called “Life Gets Better.” His desire for all FAMU students, Robinson said, was that because of their education and experience on the Tallahassee campus, “their life and the lives of their respective families would indeed get better.”

Humphries, who died in Orlando, Fla., on June 24 at age 85, was lauded for his 16-year tenure viewed as the “golden age” of FAMU. He is credited with the re-establishment of the FAMU College of Law, which had been transferred to Florida State University in 1968 when he was a chemistry professor at his alma mater. He also established FAMU’s Graduate Feeder Program, which laid the foundation for FAMU to become a top producer of graduates who would go on to earn Ph.D.s.

Before taking the helm at FAMU in 1985, Humphries was president of Tennessee State University (TSU) for 11 years. There he championed the successful legal ﬁght that led to the HBCU’s takeover and merger of the predominantly white University of Tennessee at Nashville.

TSU President Glenda Baskin Glover, Ph.D., said Humphries, even in the last days of his life, was still offering solicited and unsolicited advice. She likened him to trees – a palm, oak, and fruit-bearing trees. “He was like a fruit tree,” she said. “He was always producing good fruit in season.”

Ash said Humphries’ ties to his hometown remained strong, and he was working on several initiatives to bring development to Apalachicola at the time of his death.

While in graduate school, he met Antoinette McTurner to whom he was married for 46 years. During the funeral, Laurence Humphries, the youngest of Humphries’ three children, remembered their mother’s sacriﬁce that enabled their dad to fly all over the country to recruit students and champion the interest of HBCUs. Humphries is to be buried alongside her in Pittsburgh. Another service is scheduled for the TSU Avon Williams Campus in Nashville on Sunday, July 18. After graduate school, Humphries taught at the University of Minnesota before joining the FAMU faculty as a professor of chemistry in 1968. During that period he also was director of the 13-College Curriculum Program for HBCUs. He returned to FAMU to succeed Walter L. Smith as president in 1985.

Former FAMU President James H. Ammons, Ph.D., spoke about Humphries’ impact on his career and on the University.

“FAMU educated me, but Dr. Humphries prepared me for my life’s work,” said Ammons, who was promoted to provost under Dr. Humphries’ tenure and later served as the 10th president of FAMU from 2007 to 2012.

Ammons, chancellor of Southern University and A&M College, recalled how at the start of Dr. Humphries’ tenure the Lee Hall administration building was boarded up, dormitories were shuttered, enrollment was around 5,500 and declining and the university’s prospects seemed dim.

Humphries more than doubled enrollment while simultaneously raising academic standards. He increased the number of National Achievement Scholars at the school ranking ﬁrst in the nation three times, out-recruiting Harvard and Stanford. He made FAMU the nation’s number one producer of African Americans with baccalaureate degrees and third in the nation as the baccalaureate institution of origin for African American doctoral degree recipients. Over 42 new programs were implemented between 1985 and 2001.

His crowning achievement was FAMU’s selection as the ﬁrst TIME Magazine/Princeton Review “College of the Year” in 1997.

“He transformed this university. It’s my hope we recognize the impact of what happened under Dr. Humphries’ leadership,” Ammons said. “Consciousness was raised about the signiﬁcance of HBCUs. He believed we had greatness in us.

“We had greatness on the ‘Highest of Seven Hills.’ He cracked the code, and in doing so, he built platforms and programs to elevate the status of African Americans and HBCUs. He lived a life that mattered.”