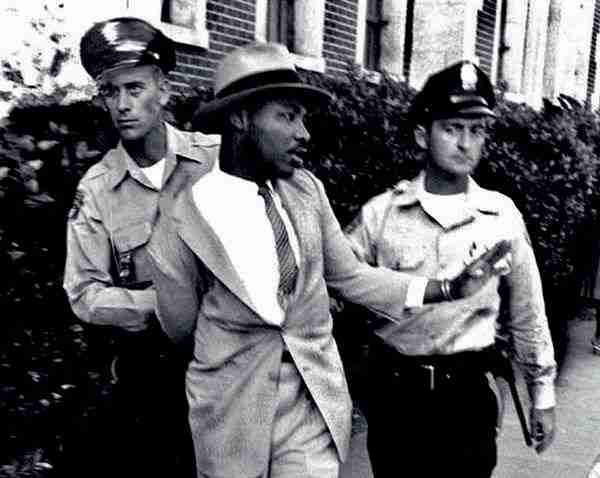 ATLANTA (AP) – A county prosecutor in Georgia said he will expunge Martin Luther King Jr.’s record for his trespassing arrest during a 1960 sit-in protesting the segregated dining rooms at an Atlanta department store.

Fulton County Solicitor General Keith Gammage told the Atlanta Journal-Constitution he is also interested in erasing the records of all other civil rights workers who were arrested in Atlanta.

“I always had in my mind, what effect would it have if we expunged the record for arrests of Martin Luther King Jr and the other civil rights protesters and called those arrests what they were – unconstitutional and biased arrests?” said Gammage, 48, who also serves on the board of trustees at King’s Ebenezer Baptist Church.

“There is a gap between social justicerelated protests and activism, and a true criminal offense,” Gammage said.

“PART OF MY LIFE”

“That is part of my history as a civil rights worker,” Bernard LaFayette, who was arrested 30 times, told the paper.

King biographer Clayborne Carson also was arrested for his work as a civil rights activist. He told the Journal-Constitution it is a “badge of honor, and it doesn’t change the historical reality that you were arrested.”

Gammage said he’s had positive conversations with the King family about his plan and wouldn’t do it without their support.

Gammage’s ofﬁce is responsible for prosecuting misdemeanors and code violations, such as shoplifting and trespassing. Since 2017, he’s cleared the records of more than 3,000 people whose non-violent and low-level charges were keeping them from getting jobs or obtaining housing, the Journal-Constitution reported.

King joined the Atlanta Student Movement ‘s campaign of boycotts and sit-ins on Oct. 19, 1960, and was arrested after asking to be served in a whites-only dining room at Rich’s Department Store.

The trespassing charges were swiftly dropped and all the protesters were let go except for King. In neighboring DeKalb County, a judge ruled that King’s arrest violated his probation for a misdemeanor trafﬁc citation, and sentenced him to four months hard labor. He was ﬁnally released after John and Robert Kennedy intervened, days before the presidential election.

During his life, King was arrested more than two dozen times. Gammage’s decision will have no effect on King’s arrests outside Fulton County, but the solicitor general said he would encourage other jurisdictions to start similar discussions.