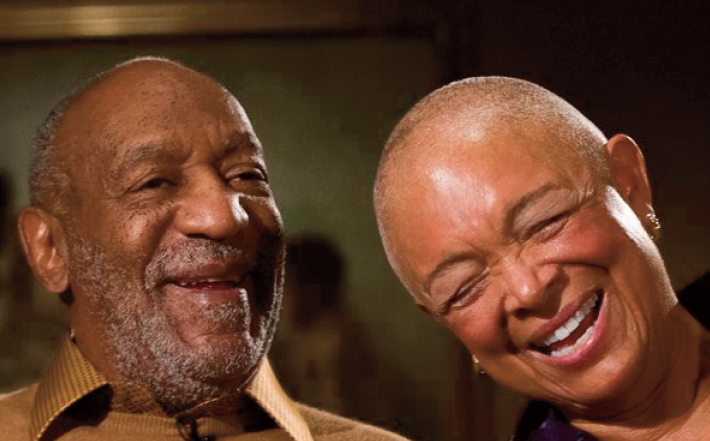 I keep trying to avoid wading into the morass of the Cosby debate, but two things keep drawing me back – attitudes around women and male leaders within the African American community.

People keep comparing Cosby to Charlie Sheen and Woody Allen. I’ve even seen a meme with George Washington that made me want to pull out my hair.

Cosby actually has more in common, though, with Clarence Thomas. Remember him? Before he was the sleepy, self-hating U.S. Supreme Court Justice that we’ve all come to know and love, he was a high-profile Negro accused of saying some very naughty things to one of his co-workers, Attorney Anita Hill.

Remember that? Remember how the black community rallied to her side, championed her bravery, and raised our voices against Thomas’s appointment to the highest bench in the land?

No, you don’t remember that because, with the exception of some high-profile black women and men, we left Anita out there. Thomas just wrapped in history, claiming that he was being subjected to “a high-tech lynching.” That he was just another black man, trying to do some good in the world, only to have these unsubstantiated attacks aimed, while not at his body like the true victims of lynching, but at his character.

And like Pavlov’s dogs, the black community accepted the logic, because that’s what we do. We protect our own, fiercely, against claims of racism, sometimes without thinking clearly or deeply about the people who ring the bell. And who can blame us? That’s what the hell of American racism has ingrained in us as a self-defense mechanism of sorts.

And that Clarence Thomas went on to be a champion against the forces of racism that he claimed tried to bring him down. Happily Never After.

We road for Clarence. We ride for R. Kelly. We ride, collectively, time and time again, for black dudes caught in rapey, exploitative situations.

We’ve had lots of practice. Routinely, in our communities, we protect our religious leaders when they are guilty of bad sexual behavior. From Elijah Muhammad to Eddie Long, black faith leaders are protected from the consequences of their nefarious choices. I’ve personally seen far too many episodes of pastors literally screwing the flock, and nothing stops. The choir keeps singing, the people keep shouting, and the collection baskets keep overflowing.

We, as a community, have habitually put our heads in the sand when it comes to our leaders. And we pay a very high price for it, because it stains the culture and lowers the bar, time and time again, until it becomes the standard. When that happens, our reaction is to shrug and turn the other way, or sometimes to dig in and defend the misbehavior with hollow logic that often does nothing but blame the victim. And the children watch, learn, and mimic.

The topic of victims brings me to my second point: the women. Too many times the protection of black men and their bad sexual behavior has come at the expense of black women and girls. Not only do we protect the pastor in the church, but too often in our homes we protect the daddy/uncle/cousin who rob our young girls (and boys) of their innocence. Black women as a consequence are left, to quote Deborah Gray White’s book title, in defense of themselves. Which has meant, from Ida B. Wells-Barnett to the black women who founded the Black Lives Matter Movement, that black women ride in defense of their men, but are left to defend themselves with efforts like #SayHerName because our community somehow can’t muster the same amount of energy to fight for the female victims of anti-black state violence as they can when the victims are male. We don’t protect black women from forces outside of our community because we struggle, as a habit, to take their side within our communities, in our homes and churches.

We don’t protect black girls and women because we blame them. We blame “fass-ass” girls for being victimized by daddy/uncle/cousin, or R. Kelly. We blame black women because “they should have known better.” Long story short, if someone takes your cookies, it’s your fault.

So, it is this well-rehearsed illogic that I see spilling into my timeline, this time in defense of Bill Cosby. It has little to do with Cosby himself, but it is sadly revelatory of the murky nexus around sex and power, and where our support falls when the two confront each other.

Notice I said sex and power, and not race. Race certainly is, I think, an issue in prosecution, but it draws attention yet again to the problems of institutional racism within the criminal justice system. Race is also a consideration because most of Cosby’s accusers are white, and he is a black man.

However, I would contend that Cosby is not just a black man, but a powerful, rich, well-connected black man. Like Clarence Thomas. Like O.J. Simpson. And the rules simply aren’t the same for them.

What I see in the accusations against Cosby is a pattern. Even if several – I’ll give you half – of the accusers are “making it up,” you still have over 20 women with eerily-similar tales of sexual exploitation.

We must remember the setting – Hollywood – where people are willing to do nearly anything to come up. In that circle, Cosby represented power. Most of the victims were young and eager to break into the business. Sex is bartered in this way in that place all the time, no doubt about that. What is different about Cosby, though, is the drugging. Not “hey, baby, let’s get high together and see where this leads” but “here, you take this” and the “this” turns out to be much stronger than just the promised muscle relaxant or allergy pill. The women don’t just get high, they get unconscious, and Cosby, allegedly, had his way with them. Time and time again. For nearly 30 years.

In these times I am thankful for the conversation, supported by the Obama administration, around sexual assault on our college campuses. The language around levels of consent help to educate all of us about what happens in these situations. A woman can consent to be alone with a man, but if she is not conscious to consent to sex, that’s rape. And the onus, despite what we’ve been taught, is not solely on her. This is doubly true if she is being deceived and drugged.

This is what Cosby and other sexual predators count on: shame and perception. They count on the public’s negative perception of female sexuality – “she asked for it” or “what did she think was going to happen?” – and the shame of their victims – to get away with their attacks. As far as we have come on the frontier of women’s rights, patriarchy stands firm in our attitudes around sexual violence, both for men and, sadly, for women.

Add to this the power and prestige that Cosby had/has in show business. It took several decades and a joke by Hannibal Buress to get enough of a snowball effect to even chink Cosby’s armor. If you want to know “why did they wait so long?” that’s why. As singular, isolated, questionable incidents, no one cared. It was the aggregation of these claims that reveals something sinister in a terrible pattern of behavior.

No average guy, black or white, would have been able to accumulate the array of victims over the length of time that Bill Cosby did.

No average guy, black or white, would have been able to accumulate the array of victims over the length of time that Bill Cosby did.

What these allegations reveal about Bill Cosby is a pattern of behavior that is reprehensible. And that has nothing to do with race.

That a human could do those things to another human is a terrible thing. Period. I see the fallout less in criminal terms and more as karmatic forces coming to bear.

I get no pleasure out of the headlines, or the arrest. It makes me sad because Bill Cosby created media that made me proud to be black, that made me excited about college, and improved my life. The same is true for my children who enjoyed his “Little Bill” series. We can still enjoy those jewels in re-runs and they will continue to have a positive impact on black culture and American culture.

And, not to say that you need to agree with me, but I’d like for us to think more critically about the conversations we have around sex and power in our communities. Because our children are listening and learning.

I overheard my 10-year-old niece and son discussing the case after CNN reported on Cosby’s arrest over the holiday, with a good grasp of the general details.

I worry about my niece. I pray that she never becomes someone’s “alleged victim.”

My concerns for my son are different. I wonder what messages are planted in his subconscious, and the subconscious of other young black men, when they overhear us, in our dinner table and barbershop talk, and in our social media posts, coat Cosby in Teflon. Will they assume that they, too, will receive this same vehement defense if they are in trouble and have a certain level of deniability? Will they somehow be emboldened to be bad actors because they know the community will have their back? That we will ride for them, too?

He and I will have to have a long talk when he’s old enough to understand more. No rapey dudes on my watch.