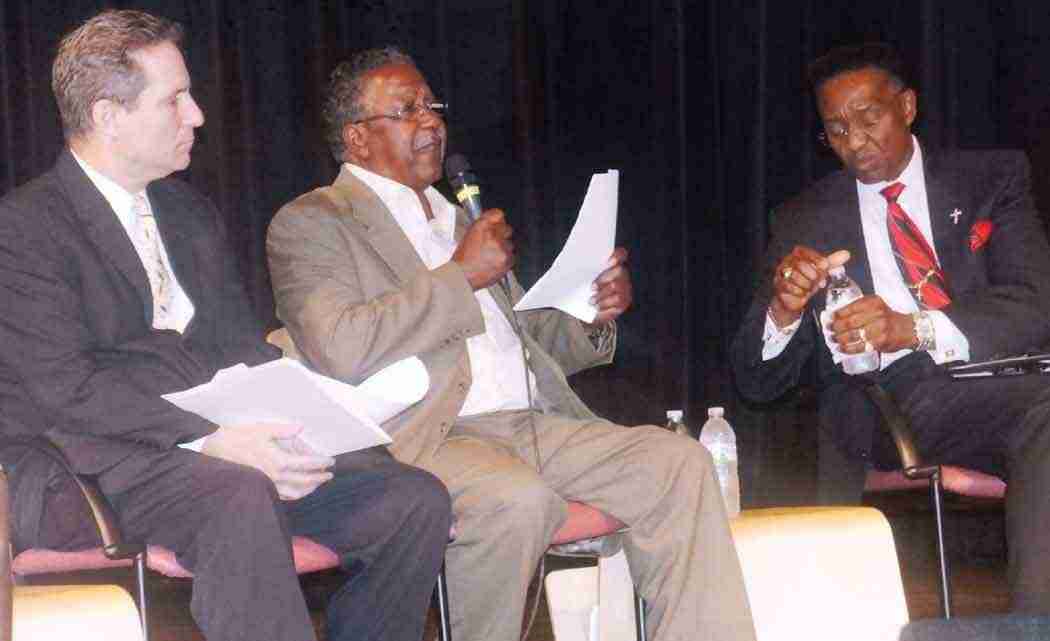 FT. LAUDERDALE —The topic of “black-on-black crime” has become more than a fleeting water cooler conversation. The root of intra-community violence is as varied as the history and circumstances that gates this speculative topic; it is, for some, as much a canard as it is an indisputable and systemic truth.

On May 16th this debate continued during the 2nd Annual “Black-on-Black Crime Solutions Panel,” hosted by local author and mentor Kevin Dorival at the African American Research Library and Cultural Center in Fort Lauderdale, among the issues discussed were changing the trajectory of black inner-city youth from being sucked into the vortex of the penal system, self-educating, the effects of mass incarceration of black men and juveniles, reparations, personal accountability and the illegitimacy of babies born to single mothers.      “What we speak of today is the work of degenerate minds,” said Dr. Agbeko-Kwasi  Aheto Tosu, an educator and socio-investigative research analyst. “It is important to know that one has not lived beyond his self-image.” And blacks’ self-image has largely been created through the use of “terrorism, inhumanity and indignation” by an American (white) “regime…that has no sense of self,” he said. Blacks in America “cannot expect the very source of your problems to be your solution.”

The solution to pandemic black “problems,” according to Rev. O’Neal Dozier is a “personal one.” Statistics show that 80 percent of children of “broken families” suffer numerous negative outcomes. Dozier said “blacks are impacted by this more than any other race.” He added, “If we paint ourselves as [the] victims we’re not going to ever solve the problems that we have in the black community. Instead of taking personal responsibility, we’re passing the buck; it’s not our fault, it’s someone else’s fault, it’s the police’s fault, it’s the system’s fault.”

Broward County defense attorney F. J. Lawrence said there is a reason for these faults—the majority of black men are “locked up” largely due to an incentives program proffered to police agencies across America to increase their drug arrests quotas—a byproduct of the War on Drugs during the early 1980s, as instituted by  President Ronald Reagan’s administration.

Since then, he said, “One of the greatest problems that we’ve had in this country is the mass incarceration of people across all spectrums of the rainbow but, it hasn’t affected anyone greater than it has affected the black community.” The disproportionate gap in drug arrests has widened between blacks and other groups of people.

According to Lawrence, economists have recently determined the most popular drug being used today is heroin, with 90 percent of its users being white; and 50 percent of those users are white women. Lawrence said that despite these statistics, in his 12 years as a defense attorney in Broward, “I’ve not represented one case of a person charged with possession of heroin … but, court dockets are filled with people charged with crack-cocaine possession.” He suggests it is an issue of community policing. “No one is kicking down doors in Parkland or Coral Springs west and shoving someone’s grandmother’s face into the couch and searching but, you better believe that they’re doing it right here in Sistrunk.”

Dozier insists “stuff like drugs are symptoms of the breakdown in the black community” due to “high rates of illegitimacy in our communities.”

Broward County juvenile justice probation officer, Cassandra Evans noted that the industry of the criminal justice system is real; that state-sanctioned “slavery” has not ended and that the juvenile justice system acts a “direct pipeline to the adult prison system.” As a precaution to life behind steel doors she advises the youth, parents and their communities to take “accountability for their neighborhoods” by not allowing them to become “cesspools for crime,” and “victims of the strategic and systemic practices of [this] government.”

Evans said that such programs are necessary; however, she also wants the community to hold hip-hop artists accountable. “I love hip-hop, but the deterioration of our arts and what it supports between what is good versus what is bad …we are indirectly telling our children that a life of crime, a life of foolishness is acceptable … this is counterintuitive to being successful,” she said.

Improving black communities cannot be contingent on remuneration some blacks believe they are due, according to entrepreneur Connie Moss. “It is a pipedream for black people to wait for the government to give [us] reparations. If it is given to us it will not solve our problems unless we learn about home ownership and financial stability.”

Many of the ills of the black collective are “the systematic bastardization of the mind,” Aheto Tosu said. “When you understand the reality that you do not share the reality of others you begin to understand what you have to focus on.”