Bring back our African girls 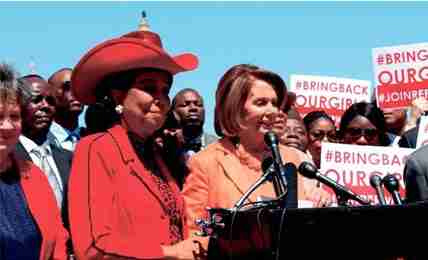 WASHINGTON, D.C. – Although separated by thousands of miles, and vast political and cultural differences, one major commonality between the Chibok school girls and Congresswoman Frederica S. Wilson is the idea that an education can change lives. Two years ago when she learned that the girls had been kidnapped on April 14, 2014 as punishment for seeking an education, Wilson was “both shocked and angry.”

So much so, that two months after the abduction, Wilson traveled with colleagues to Nigeria and met with some of the girls who had escaped to safety.

“We also met with several members of the other victims’ families. The experience was both heartbreaking and inspiring. As a mother, my heart broke for both the girls and their families,” Wilson said in an emailed response regarding the second anniversary of the Chibok school girls’ kidnapping. “As a former teacher and principal, the concept of punishing children for pursuing an education and opportunities beyond their poor villages is unconscionable to me,”

To help keep global attention on the 219 Chibok girls who are still missing two years after Boko Haram kidnapped them from their dormitory rooms, and to provide an update on efforts to end the insurgents’ reign of terror, Wilson on April 14, hosted a forum titled “Two Years Later: The Missing Chibok Girls, Boko Haram and the Humanitarian Crisis in the Lake Chad Region.”

It featured experts in counter-terrorism and humanitarian activities, including Malcolm Nance, executive director of the Terror Asymmetrics Project on Strategy, Tactics and Radical Ideology, who frequently provides analysis of terrorist acts and activities on CNN, MSNBC and other major networks.

Wilson’s ongoing involvement is because of her concern for the girls but also to keep her word to the founders of the Bring Back Our Girls movement, who asked her to lead the effort in the United States.

“The goal is to keep focus on the 219 girls who are still missing and raise awareness about Boko Haram, which has since been ranked the world’s deadliest terrorist group. I’m a mother and if something like this happened to one of my children I would not want anyone, particularly people in positions of authority, to stop fighting for their safe return.”

While she doesn’t believe that the world has forgotten the girls, she said “ISIS is what comes to most people’s minds when it comes to terrorism, because they’ve struck in the U.S. and throughout Europe and the Middle East.”

During the April 14 press conference, Wilson remarked on the international community’s double standard in the way it treats Boko Haram compared to the focus it gives ISIS, and how little attention the West African terrorists’ victims have received from both the public and the media.

“I also think that because this is a case of Africans killing Africans and destabilizing Nigeria and its border nations,” she explained.

She cautioned that Boko Haram’s leaders are quite smart and very strategic.

“They are well aware that the battle to defeat them also includes getting those girls back. I don’t think it’s unrealistic to think that they are keeping the girls safe to use as bargaining chips. CNN aired a clip from a video Boko Haram has provided to demonstrate “proof of life.” They will use that in their negotiations,” Wilson cautioned.

She added, “The Nigerian government should negotiate with Boko Haram. I believe that France and other members of the international community are willing to help them.”

Saa is one of about 50 Chibok girls who escaped from the kidnappers and relocated to the United States to continue the educations that Boko Haram tried to steal from them.

“I just wish I can talk to them. I just wish they can hear me. I just wish I can tell them how much we miss them. And I just wanted to tell the world that, let’s not give up. Let’s not forget about these girls. Let’s keep praying for them,” Saa told reporters at the press conference.

Several lawmakers joined Wilson to denounce the devastating impact that Boko Haram’s senseless acts of violence is having in Nigeria and its neighboring nations. Democratic Leader Nancy Pelosi noted how important it is for lawmakers and everyday citizens to stand up for the Chibok girls. Pelosi also commended Wilson’s persistent determination and leadership of the Bring Back Our Girls movement in the United States.

“You are the one who has brought us together over and over again. On a regular and almost daily basis, [the girls] are remembered in the Congress of the United States under the leadership of a very special person, Frederica Wilson – a persistent, impatient, dissatisfied, relentless advocate for their release.”