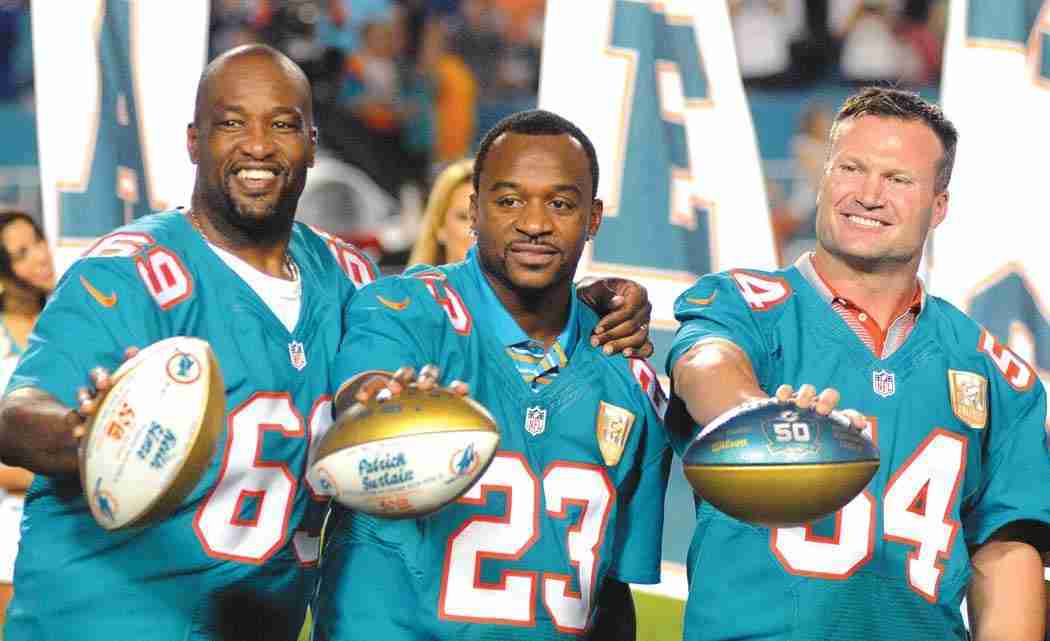 MIAMI —  They walked the Red Carpet last Friday night at the Hollywood Diplomat Resort and Spa, just like the bonafide stars they actually are. They are all time Miami Dolphins greats, such as Larry Csonka, Larry Little, Bob Griese, Paul Warfield, Nick Buoniconti, Mercury Morris and Nat Moore. In aqua blazers, they posed for photographs –some with their families, others alone. But it was one of the great moments in the franchise’s history as they showcased the Top 50 All Time Greatest Dolphins players as they commemorated the team’s 50th Anniversary.

The 50th Season celebrations began Friday night on the Red Carpet as all 50 players and alumni, with the exception of a few, strolled along the carpet as cameras clicked to get photo as they went down in history. The older ones mentioned above, fraternized with the newer players and alumni who were also chosen for the all-time Top 50 selection. Jason Taylor said he was in awe, while Mike Pouncey and Cameron Wake, displayed a big wide grin as they posed for the lights and cameras. The two “Marks” –Mark Clayton and Mark Duper joked around with each other as they waited their turn to enter the spotlight. Duper donned a big pink hat, clearly making him stand out in the crowd. Hall of Famer Dwight Stephenson, was humble and pleasant as he was showcased. The Don – the legendary coach, Don Shula, entered in his scooter, and he was among the last, while the Fins newest coach, Interim Head Coach Dan Campbell was among the first to enter the room. But no 50th Season celebration would be complete without Marino. Dan Marino walked the Red Carpet and was grabbed by reporters before he made it to the other side of the floor.

The players and alumni also autographed the huge “50” sign as they entered the walkway. “This is truly an honor,” said Jason Taylor. “I still feel like I’m back in the locker room, fraternizing with so many of the guys.”

But that was only the beginning. Sunday, they showed off their golf skills on the course in a classic golf tournament.

All of this was in anticipation of Monday Night Football, where the Fins would take on the New York Giants at Sun Life Stadium – and in grand style, celebrate their Golden Anniversary. There was a capacity crowd of 65,408 as ESPN televised the game. Grammy Award Winning recording artist, Melissa Etheridge sang the national anthem, and fireworks got the night started. Honorary team captains were: Dan Marino, Bob Griese, Larry Little, Dwight Stephenson and Nick Buoniconti. During half-time the top 50 were honored one-by-one, wearing jerseys, and were given a commemorative “50th Season” football. The crowd loudly cheered. The final introduction went to Don Shula, who received a standing ovation.

Later, the honorees said they were elated and pleased the Dolphins organization chose to honor them. Keith Jackson, who was among the honorees, said he has learned life lessons from Coach Shula.

“I’m so thankful to the Dolphins organization. I had a great stop here, and it’s great to see it’s appreciated. Coach Shula was very hard, organized and he didn’t take no mess. When you grow up, you appreciate it,” he said. “This celebration has been awesome, first class all the way.”