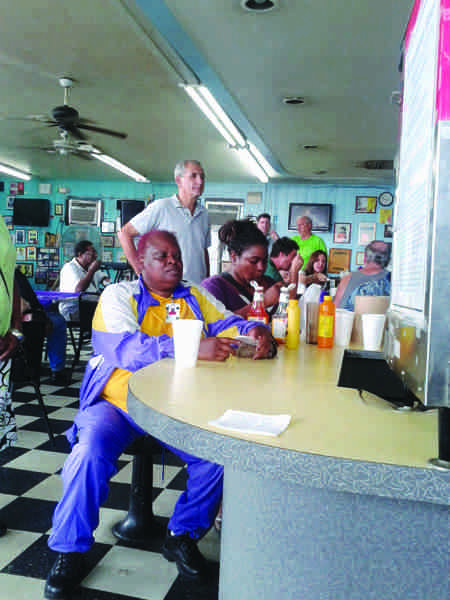 BY JOSÉ E. PÉREZ And

LIBERTY CITY — The happy chatter about Miami of yesterday, today and all in-between echoed off of the ocean-blue painted walls for the last time. Jumbo’s, a 24-hour culinary, social and historical local institution on Seventh Avenue in Liberty City, is doing something its local customers are not accustomed to – closing – and this time for good.

He didn’t think he had enough food to serve for one more hour. A patient line inched toward the counter to order what they know is their last Jumbo’s meal. Chicken, shrimp and fries, lots of fries, were being ordered.

“I hope we don’t run out of food,” says Flam, exhausted from a marathon day of service and wearing his third shirt change.

Flam’s crew had whittled down a line of hungry people and about 75 people and a festive air filled the restaurant.

“From 1959-2014 we have given people good food, fare price and a family friendly atmosphere,” Flam said.

Yet, the same elements that the restaurant survived over the years – race riots and hurricanes – contributed to the restaurant’s
decline.

The restaurant at 7501 NW Seventh Ave. is the only white-owned establishment that did not close after the 1980 McDuffie riots that gutted parts of Liberty City, leaving 18 dead, some $100 million in damage and 3,000 people out of work. Hurricane Wilma in 2005 damaged the restaurant and after an insurance claim, Flam still had to pay thousands of dollars for repairs, he said.

On the day of the closing the restaurant looked the same. The walls were still adorned with comic books and congressional proclamations. The tables were still covered in
American-graffiti Formica; the floor, still checkerboard black and white.

Perhaps the biggest and most enduring part of the Jumbo’s story is its central role in transforming the history of Miami. The decision by the Flam family to desegregate Jumbo’s is a point of demarcation in Miami’s civil rights process. It helped Miami change from a sleepy Jim Crow town into a cosmopolitan metropolis.

Deborah Donovan Trotter, a retired educator, remembers as a little girl in the 1950s having to order and receive her food at the back window. Those times, Miami restaurants were segregated. By the late 1960s things had changed at Jumbo’s. Flan, who is Jewish, hired black workers and allowed blacks to eat in the main dining room before almost any other businesses in Miami. About 30 white employees quit when they did.

Trotter remembers when she was able to order from the main counter for the first time.

“It was excitement to come in, take a seat and realize you are allowed to be a human being.” Since then, Trotter, who taught both of Flam’s children at Highland Oaks
Elementary School, has been coming once or twice per month, or as often as she can.

Now, the Liberty City neighborhood is losing the eatery.

The New York Times reported that Flam said a developer has agreed to buy the building for $490,000 and has promised to turn it into a retail center and low-income housing.

Jaggy Earley, retired social worker, understands why Jumbo’s has to close. When she worked downtown Miami in the 1990s, Earley and others would stop off at Jumbo’s for takeout and also stop at a bookstore, boutiques and other small businesses that were vibrant on Seventh Avenue. But those have been long gone. And so are the customers.

In 2010, Flam complained about the demise of the neighborhood and the economy.

“The last five years have been rough. My business stinks,” said Flam at the time. “It’s a combination of the bad economy and the bad neighborhood image. I want to bring the neighborhood back.”

When the history of Miami is finally recorded, Jumbo’s may be viewed as a vital ingredient in the making of a community.

Next post Tax returns an issue in Florida governor's race