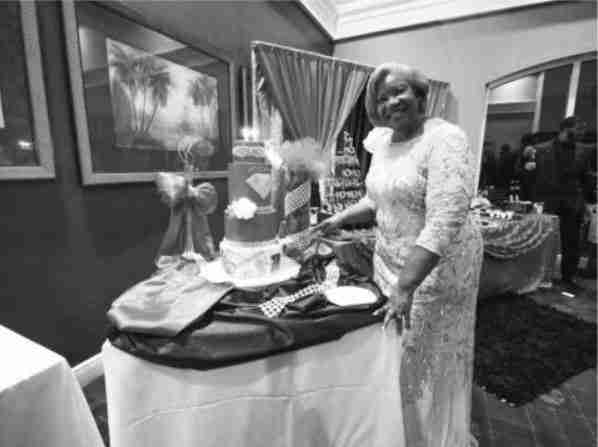 Veteran Journalist Bea Hines enjoys friends and family during the celebration of her life at her 80ieth birthday celebration.

MIAMI GARDENS, Fla. – An elegant gala celebrating her 80th birthday turned into a salute to journalist Bea L. Hines Saturday night at the Plantation Preserve Golf Course and Club in Broward County.
Hines “has utilized her journalistic career to serve as a voice for the African-American community, for women and for people of faith,” U.S. Rep. Frederica Wilson, D-Fla., said in a statement read to the gathering of about 100 family and friends.

Hines’ life “is a testament to selfless dedication and service and she measures her own accomplishments by the number of lives that she is able to impact and change,”

Wilson added in the statement read by her outreach director Charles C. Scott III. Pressing matters in Washington kept the congresswoman from attending, he said.

Scott announced that Wilson read the six-page tribute to Hines on the floor of the House of Representatives a week earlier and asked that it be entered into the Congressional Record and hence the Library of Congress on Feb. 12, Hines’ birthday.

Hines has won praise in South Florida and nationally not only for her work as a journalist but also for defying the odds in her rise from humble beginnings. She has inspired many young black reporters and African-Americans, generally, Joe Oglesby, The Herald’s retired editorial page editor, said at the gala.

Oglesby, who met Hines when he joined The Herald, said she was an inspiration. She helped him and others to navigate the pitfalls encountered by black journalists, he said.

Her son Shawn A. Hines told the moving story of a loving mother who made many personal sacrifices for her family.

Hines’ journey to becoming “one of Miami’s iconic hometown heroes,” as Wilson called her, began with a nearly 325-mile journey to Miami from Williston in North Florida, with her mother Belle Johnson and brother Adam, after their parents separated.

Her mother, a domestic worker, who died in 2002, “worked so hard to give us a decent life,” she told South Florida Times Monday. “She often worked two jobs, so my brother and I could have nice clothes and a decent place to live. We lived in the Liberty Square housing project but mom had our little apartment fixed up so cute. I was always proud to bring my friends home.”

Hines graduated from the historic Booker T. Washington High School and served as a domestic worker on Miami Beach for two families. She said she quit after one of the families went on vacation without paying her.

Her mother, she said, wanted her to become a nurse or a teacher, “where I would be able to get a job as a black woman.” Instead, she was hired as a filing clerk in The Herald’s library in 1966 and she attended night classes at then Miami-Dade Community College.

She switched from education to journalism on the advice of the late Fred Shaw, her mentor, then the college’s vice president of development and a former Herald book editor.

“Fred encouraged me and lived long enough to see me become a reporter,” she said. “He died two years after I started writing. He was so proud of me.”

Journalism was a perfect fit for her, she said. “Growing up in the 1950s, I never dreamed that I would have a career doing something I truly love to do. Back then, little black girls didn’t aspire to become journalists. I guess I was different — and my friends laughed at my dreams, even my husband, who once told me I lived in a dream world because I enjoyed the arts. My mom, bless her, was so afraid that I’d be disappointed that she never encouraged me to do anything in the arts.”

The Herald hired her as a reporter in 1970 and in nearly half-a-century as a journalist she has written news stories, features and columns, more recently focusing on religion.

In 1985, her columns were nominated for the Pulitzer Prize – journalism’s top award.

Hines also has made a mark in religion, not only through her reporting but also her work with her church of 56 years, The Church of God Tabernacle True Holiness in Miami’s Liberty City. She started the Black History program and Grad Day, is a missionary and Sunday School secretary and a trustee.

Saturday’s celebration was planned as a surprise and it worked. “I knew they were going to do something for me but didn’t know what or even when,” she said Monday. “I was told that I was going to a formal event where Cecily, one of my goddaughters who is a lawyer, was being honored by the Bar Association. The wonderful young ladies who threw the party for me are like my biological daughters. I have loved them from their birth and they have loved me back. It is a wonderful thing to sow good seeds into young people; the harvest is always great.”

And so it is for Bea L. Hines. “She started out in a library and now she is in a perpetual library,” remarked Scott, referring to the Library of Congress.