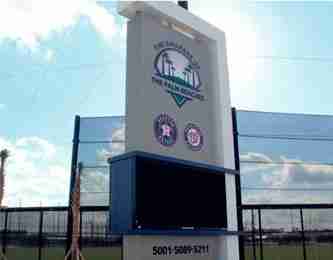 WEST PALM BEACH, Fla. – Some major league investment has come to the longneglected northwest corner of West Palm Beach, as the $145 million Ballpark of the Palm Beaches heads for home plate.

Residents and business people say they can’t wait for the Feb. 28 grand opening of the baseball spring training complex, south of 45th Street between Haverhill Road and Military Trail, which will host the Washington Nationals and Houston Astros.

“It’s good for business,” said Manjeet Jauhal, assistant manager at the Foodtown supermarket in the South Wind Plaza just north of the facility. “It’s something that people are going to be coming to, so it’s good for the area overall.”

Palm Beach County, West Palm Beach and Major League Baseball officials attended the November 2015 groundbreaking on the 160-acre site that for decades had been an overgrown waste dump.

With barely a year to get the job done, construction crews have been working almost around the clock to cement the collaboration between the elected officials and the teams.

Plumbers, painters and other contractors are rushing to complete the 7,500-seat main stadium. Meanwhile, surrounding the stadium, groundskeepers are nursing the fresh sod on a dozen practice fields, where fans will be able to walk past the world’s top ballplayers, officials say. Just last week, the batting cages arrived on those fields.

Officials say that in addition to the hotel, restaurant and other tourism benefits of the brief, annual spring training season, the facility throughout the year will host everything from minor and amateur league baseball, concerts and other cultural events.

A half-dozen soccer fields along the complex’s southern end will provide overflow parking space. An eight-acre public park, to be paid for by the teams but owned and managed by the city, is still in design for the southwest corner. Some locals already are enjoying the jogging trail being readied around the complex’s perimeter.

The baseball and elected officials are going to bat for an area in which The Rapids Water Park is the closest major attraction. That popular venue is several blocks north across the city line in nearly 70-percent African American Riviera Beach.

The area’s ethnic diversity is reflected beyond the small Jamaican restaurant and Chinese bakery at the Foodtown supermarket near the Ballpark.

Tonya Bell, senior business manager at Caribbean Villas, said she had no doubt that the new facility will increase local opportunities.

“I think it’s going to be great for our area,” Bell said, “and it’s going to give me something to do too. I can go and watch a game without having to travel so far.”