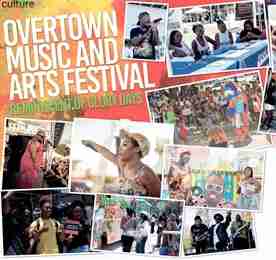 The fourth installment of the Overtown Music and Arts Festival drew a record crowd and was filled with laughter, music and fun.

MIAMI – What residents and tourists currently see on the streets of Overtown is a far cry from the appeal it once boasted; however, an annual event is bringing a vibrancy reminiscent of yesteryear.

The free outdoor event was produced by marketing think-tank Headliner Market Group (HMG), whose CEO, Michael Gardner, said he is grateful to be a part of Overtown’s image overhaul.

“This was an existing festival formerly called the Overtown Rhythm & Arts Festival. In 2014, we were offered the opportunity through (District 5) Commissioner Keon Hardemon and the

He said he was thankful for the community’s support.

“The festival has grown immensely and we are very grateful for the support of the people in Overtown and outside of Overtown; the vendors, the businesses, the artists who participate, the staff, the volunteers, production companies …,” Gardner continued.

Hardemon said he is adamant about restoring Overtown’s glory – hoping to improve the area extensively enough that people feel an emotional connection to what is going on. Art and music, Hardemon attests, are key factors to the transformation because of their historical and cultural significance within the black experience.
“We have seen tremendous growth with the Overtown Music and Arts Festval. The event attracts new visitors to the redevelopment area and highlights the investment made by the CRA,” Hardemon said.

As the event gains traction both stateside and abroad, organizers hope it fuels economic growth and community development reminiscent of Overtown’s glory days.

One reminder is the Josephine and Dunn boutique hotel, recently restored as a representation of an era comprised of black pride and ownership. It is an archetype of black luxury residences formerly prominent in Overtown before the construction of Interstates 95 and 395sliced through the once thriving black community.

Gardner is mindful of the area’s former power and current potential.

“It is where the builders of Miami resided. It was rich in music and entertainment and it is a community that we’re invested in not only in business, but the youth as well,” Gardner said.

Additionally, he wants Overtown to become a destination for tourists and locals alike.

“Just like people go to the Grove to have breakfast, lunch or dinner or go to Wynwood for entertainment, art and social activities, we want them to look at Overtown as an option.”

June Raines, a lifelong resident of Liberty City said she is looking forward to next year’s event.

“When people think about Overtown they get scared, but this event was really nice. There was no known crime, no violence … just good vibes, just a good time with my people,” she said, noting, “My husband and I will be back next year.”
Another festival-goer, Tony Centeno, said, “Overtown Music & Arts Festival 2017 was one one for the books” in a tweet that also included him giving Headliner props for their work on the festival.

Deborah Roberts, a lifelong resident of Overtown, has been a vendor at the festival every year with her husband. Though he died earlier this year, she was still at the festival with their famous ribs and chicken.

“My grandmother was one of the founders here in Overtown … I’m always looking forward to being a part of my community,” Roberts said. “Overtown did come alive. The only thing I was missing was my husband, but he guided me every step of the way.”