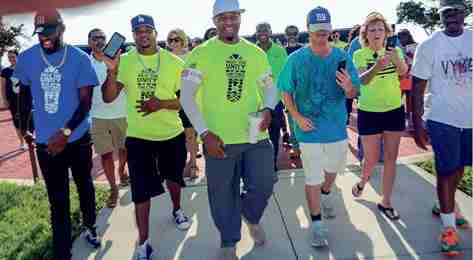 WEST PALM BEACH, Fla. On Aug. 11, amid a sea of support, Reggie Dee, of X102.3 FM in West Palm Beach, who broadcasts during the Steve Harvey Morning Show weekdays, began the long journey from the Dr. Martin Luther King Jr. Memorial in downtown West Palm Beach, to Seattle, Washington to the TMobile headquarters, his major sponsor.

“This walk is about him,” he said pointing to the statue of King behind him. “He had a dream, and we are here to make that dream come true!” he said, as supporters crowded around him. “This is about bringing people together from all walks of life for a positive cause.”

About a couple hundred well-wishers, sponsors, friends and family gathered around the MLK Memorial for a brief ceremony before the beginning of what is expected to be a 90-day journey. Edith Bush, Executive Director of the MLK Coordinating Committee, said a brick with Dee’s name and a star on it will be placed at the foot of the MLK statue.

“He is deserving of having a star placed on his brick!” she quipped.

Other dignitaries on hand were Mayor Jeri Muoio of West Palm Beach, Patrick Franklin, President and CEO of the Urban League of Palm Beach County, and State Senator Bobby Powell, who walked alongside Dee when he embarked on the journey.
Mayor Muoio said she adores the deejay and said she will always support his endeavors. “I love Reggie! He’s such an amazing person and he has my support.” “This is such a great and important cause…especially at such a time in our country. The more people realize that we’re stronger together the better off we are. He’s taking the initiative to make positive change. He is surely an asset to our city and community,” she said.

Franklin, of the Urban League, concurred. “It hurts the fabric of this nation when we see this country divided,” said Franklin. “Reggie has touched a lot of lives, but we need more. I applaud this young man for all he has done over the years, not just today.”

“I support him in all his endeavors. He’s a conduit for me to the community. I put a lot of trust in him.”

Some friends came as far away as Georgia to be with him. Others came across the state to support him. Corey Hall, Chef to the Stars, said the two have known each other for quite a few years, and a recent illness was not going to stop him. “I’m going to support my man in any way possible,” he said.

Charlie and Renee Thornton, of West Palm Beach are sponsors of Dee. They brought him a smoothie from their company, Smoothie Whirl’d, to get him off to a great start. “His cause is our cause too,” said Charlie.

Geraldine Cyrus, owner of Buddy Batons, LLC, of West Palm Beach, gave him three batons she created while recuperating from cancer.“I’m giving you these batons so you can get your groove in as you walk,” she told him, laughing. “I’m so proud of you and so amazed at what you’re doing.”

Freeman said all of Palm Beach County should be proud too. “He’s our own and we all should be so proud of him!”