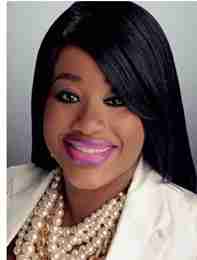 FT. LAUDERDALE – South Florida’s young professionals are on an upward trajectory and native Kerline Jules is one of its best and brightest. Jules recently made history by becoming the first member from the Urban League of Broward County’s Young Professionals Network to be appointed to serve on the organization’s executive leadership team of young professionals.

She will serve as the national Communications Chair of the National Urban League Young Professionals (NULYP), overseeing the entire communications strategy of the organization, from internal communications to PR & Marketing.

A longtime member of NULYP, Jules previously served on the national communications team as the marketing manager, where she was responsible for spearheading campaigns, including the current Super Hero themed one, which encouraged young professionals to “Find the Super Hero in You!” In her new role, she will lead a dynamic group of approximately 50 marketing and PR leaders, whom she envisions using their platforms to share NULYP’s story in innovative ways.

“Building on our current #YPEmpowered Superhero Campaign, I plan to continue to push innovative ways to share the message of the National Urban League Young Professionals (NULYP) movement by cultivating strategic relationships with publications and media outlets, maximizing our digital platforms by increasing our content marketing and through promoting interactivity through the NULYP website, social media and email marketing,” Jules told the South Florida Times.

Jules also served two-executive terms as president of her Broward County NULYP chapter, where she was instrumental in re- branding and increasing the chapter’s touch point in South Florida.

When asked how she felt about receiving such a prestigious appointment, Jules said she didn’t take it lightly.

No stranger to servant leadership, Jules was appointed by Florida State Rep. Shevrin Jones as the chairperson of the South Florida Youth Summit, a premier, annual, high impact youth conference.

She has been recognized as one of Legacy Magazine’s South Florida’s 40 under 40 Black Leaders of Today & Tomorrow, a Young & Powerful Group Rising Star Community Leader, an ICABA Honors Rising Star Community Leader, a finalist for the Greater Miami Chamber Difference Maker Hype Awards and was inducted into the 100 Outstanding Women in Broward County.

She said she is excited to take on her new role.

“I’m excited to lead a dynamic committee of communications and marketing young professional experts. I look forward to building on the legacy of those who labored before me in this role.”