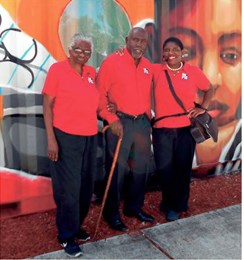 The sold-out tour featured a delivery of book donations to the mobile pop-up library in Historic Northwest in West Palm Beach, and a trip to historic sites in the City of Boynton Beach including Poinciana STEM Elementary School and St. Paul AME Church on Feb. 21.

The members of the African American Travel Club brought numerous family-oriented book donations to the pop-up library located in Historic Northwest in West Palm Beach which is a historic African American neighborhood settled by black pioneers from North Florida, Alabama, Georgia, South Carolina and the island of the Bahamas.

“African American heritage has substance in Palm Beach County,” said Lori J. Durante, the tour organizer. “The area’s black settlers were pioneers, therefore I was honored to coordinate” the tour.

The nonprofit Museum of Lifestyle & Fashion History hosted the tour which was conducted by tour director Lori J. Durante. The museum was established in year 1999 and has presented more than 17 exhibitions.

Next post Students get hands-on STEM training at Cable Academy