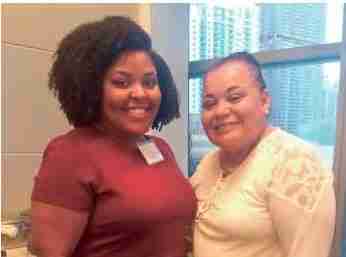 Kaela Makins (left) and her mother, Wendy Woodward, were excited when Makins received a Certificate of Accomplishment for her work on Race Relations

MIAMI – Desiree Daniel and Kaela Makins are proof positive that despite reports to the contrary, young black students are changing the world for the better.

On Monday, April 24, both forward-thinking young ladies received recognition by the South Florida Princeton Prize Committee for their positive contributions to race relations.

Daniel – a senior at Deerfield Beach High School who will attend Baylor University in the fall – was awarded the Princeton Prize in Race Relations for her work encouraging students and teachers to recognize and discuss racial issues that are sometimes hidden below the surface.

To accomplish this, Daniel spent weeks conducting surveys with over 300 of her peers about their feelings on the state of race relations in their school. Questions included perceptions of racial harmony at the school, whether they felt it was a safe environment and how the students from varying racial and cultural backgrounds (black, Hispanic and white populations) got along.

After her initial research, Daniel was encouraged to delve deeper. She found that some students did in fact subscribe to racial stereotypes and self-hatred.

For example, one black male student felt that his own self-worth was limited to his athletic abilities, “because that’s just the way it is,” he said.

Daniel encouraged students to think about ways they could use social media to address issues in the future.

“My project really wasn’t about what I did, but it was about what I did for the community,” Daniel said. “I just wanted to really get the message out there to other people and I wanted to expose the problem of race relations to people who don’t really travel outside of the area because they don’t have the opportunity.”

According to officials at her school, since Daniel did her project students are more engaged on race issues. Daniel said she desires to continue her work with the project when she gets to college.

“I noticed that although my school is diverse, a lot of people don’t actually know what race relations is,” Daniel said. “Although I want to become a doctor, I do want to do this on the side because it’s a passion of mine. I’ve experienced racism and it not something nice. It’s caused by ignorance. It’s not something built into someone and we can change that.”

Makins – a senior at Carrollton School of the Sacred Heart who will attend Hamilton College in upstate New York as a Posse Scholar in the fall – received a Certificate of Accomplishment for her work organizing various events to bridge the racial gap as president of her school’s Black Student Union (BSU).

Makins and her fellow BSU members held a ‘Black Out Week’ that had several events including: a visit from noted black entrepreneur and founder of BlackTech Week, Felecia Hatcher; a panel discussion by six black Carrollton seniors who shared their experiences of what it means to be a black woman in America; a cookout reunion and more.

As a result, the Carrollton BSU raised over $700 to start a scholarship, which they will award to a young woman of color in two mentoring programs at their school.

Makins said with only four black students per grade at Carrollton, they are a marginalized minority to their white and Hispanic peers. Therefore, she deems it her responsibility to educate her peers on black culture.

“It is a difficult and important mission of mine to guide my fellow African American peers in bringing awareness to black politics, current events, pop culture and history to our Carrolton high school campus,” Makins said.

The Princeton Prize is awarded nationally by the Princeton University Alumni Council and in South Florida by a committee comprised of representatives of various entities to a high school student whose work has a significant, positive effect on race relations in his or her school or community.

As the winner of the award, Daniel received a cash prize and spent a weekend at the Princeton University campus in New Jersey attending a symposium on race relations in America, along with other prize recipients from around the country. Cornell William Brooks, president of NAACP, gave the keynote address.

“We’ve seen the worst of what could happen when power is abused to divide people, to make us feel like others are less human than we are; and we seem to have come to a place in our country again where it’s become harder and harder for us to talk to other people on almost any issue … and if we can’t talk to each other we’re not making any progress,” said Jonathan Colan, chair of the South Florida Princeton Prize Committee. “The first step in building bridges between us instead of walls to divide us is to find new ways to talk to each other and tonight I think we’re very lucky to have with us and to recognize two South Florida young people who have found new ways to talk to each other, to talk to diverse communities … and to reach across and that’s what inspires us to keep going forward.”

For more information on how to apply for next year’s Princeton Prize, email princetonprizemiami@yahoo.com or visit www. pprize.princeton.edu/apply.