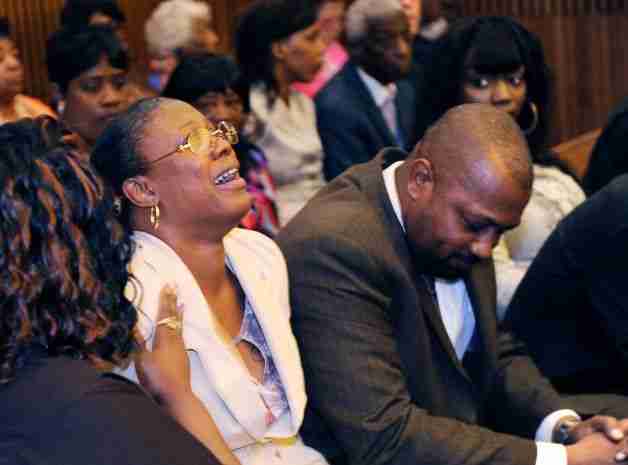 DETROIT— A suburban Detroit man who insisted he killed an unarmed woman on his porch in self-defense was convicted of second-degree murder Thursday after the jury rejected his tearful claim that he fired through a screen door in the wee hours because he feared his life was at risk.

No one knows why Renisha McBride ended up at the Dearborn Heights home of Theodore Wafer last Nov. 2, although prosecutors speculated that the 19-year-old woman may have been confused and seeking help, hours after she had crashed her car blocks away. An autopsy found she was extremely drunk.

The jury convicted Wafer of second-degree murder, manslaughter and a gun-related charge after deliberating for about eight hours over two days.

Wayne County Judge Dana Hathaway warned that she would lock people up for any outbursts, and the courtroom was silent after the verdict was read.

McBride’s mother, Monica McBride, cried and clasped her hands as if praying. She gave long hugs to prosecutors as the courtroom emptied.

Wafer, 55, who had been free on bond, was ordered to jail to await his Aug. 25 sentencing, despite vigorous objections from his attorney, Cheryl Carpenter. He faces up to life in prison, but it’s likely his punishment will be shorter.

“We learned he was a cold-blooded killer,” McBride’s father, Walter Simmons, told reporters.

“People have a right to bear their arms and everything else, but you have to do it with reason and responsibility,” Simmons said. “Not just murder somebody when it’s not justified.”

Jurors declined to comment after the verdict, and Carpenter couldn’t immediately be reached for reaction.

“She ended up in the morgue with bullets in her head and in her brain because the defendant picked up this shotgun, released this safety, raised it at her, pulled the trigger and blew her face off,” Muscat told jurors, holding the gun.

Wafer, an airport maintenance employee who lives alone, said he was roused out of sleep around 4:30 a.m. by pounding at his front and side doors. He testified that the noises were “unbelievable.”

“I wasn’t going to cower in my house,” Wafer testified.

He said he thought there could have been more than one person outside his 1,100-square-foot home near the Detroit-Dearborn Heights border. Wafer said he pulled the trigger “to defend myself. It was them or me.”

“He armed himself. He was getting attacked,” Carpenter told jurors. “Put yourselves in his shoes at 4:30 in the morning.”

Several trial witnesses called by prosecutors described their encounter with McBride after she crashed her car around 1 a.m., a half-mile away in a Detroit neighborhood. They suspected she had been drinking, but she walked away before an ambulance arrived to treat a likely head injury.

Witnesses said she talked about just wanting to go home — a key point repeatedly emphasized by prosecutors as they tried to counter the defense team’s portrayal of McBride as a violent woman.

Muscat said Wafer could have stayed safely in his locked home and called 911 instead of confronting McBride.

“He had so many other options. … We wouldn’t be here if he had called police first,” the prosecutor told the jury.

Wafer is white and McBride was black, and some wondered in the aftermath of the shooting whether race may have been a factor, likening it to the shooting of Florida teenager Trayvon Martin. But the race angle was hardly mentioned at the trial.

“It’s about people with guns who don’t use the right judgment before they pick them up,” McBride’s aunt, Bernita Spinks, said outside the courthouse.

Previous post AIRSTRIKES UNDERTAKEN AS US RE-ENGAGES IN IRAQ