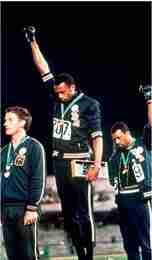 The NFL protest begun by Colin Kaepernick is reminiscent of the silent raised fist protest by gold medalist Tommie Smith and Bronze medalist John Carlos during the National Anthem at the 1968 Summer Olympics in Mexico City.

It’s time to find your courage. National Football League owners have thrown down the gauntlet in their decision to compel standing for the national anthem, and left you with two options: embrace your power as nearly 70 percent of the sports league that is the world’s most profitable as a direct result of your talent and labor; or bow to a provocative display of authoritarianism intended to crush peaceful, powerful opposition to centuries of systemic racism.

The NFL’s new national anthem policy reflects not only a complete disregard for the humanity and autonomy of black people, but the apparent belief the title “owner” conveys literal ownership of your black bodies. It is also the latest in a long list of similarly abhorrent actions by the NFL in service to racism and white supremacy. From overtly excluding black players from its ranks; to restricting access to positions based upon presumed intellectual inferiority; to maintaining a system of inequity where the overwhelming majority of leadership positions are held by whites while you comprise most of the labor pool. Like our ancestors, your primary value to NFL ownership appears to be the degree to which they may continue to use your body, with little to no regard for the effects on your physical and personal well-being, to make exorbitant profits.

Based upon the NFL’s adoption of this dishonorable policy and the associated deliberate exclusion from the league of your brothers Colin Kaepernick and Eric Reid, I respectfully recommend you consider engaging in one or more of the following methods of protest during the 2018 season:

1) Refuse to play football, akin to a holdout (#NationalAnthemHoldout);

The core basis for the NFL’s national anthem policy is the contention that failing to stand for the national anthem is disrespectful to veterans and the flag. This argument is illogical. A nation’s anthem and flag’s primary purpose is to represent the entirety of its citizenry; and participation in the anthem ceremony is a private decision every American is entitled to make. Any other symbology attached to the anthem or flag related to subgroups such as veterans, police, and civil servants must be subordinate or secondary to its primary representation. Further, as veterans take an oath to support and defend the constitution, it is nonsensical to then declare that the actual exercise of those rights is disrespectful to this very group. The military is not a monolith, and our varied opinions on this issue should not be given any more weight than that of any other citizen. Additionally, the statute which delineates actions disrespectful to the flag does not include kneeling or remaining seated during the anthem. Finally, as eloquently stated by the Supreme Court in West Virginia v. Barnette.

To believe that patriotism will not flourish if patriotic ceremonies are voluntary and spontaneous, instead of a compulsory routine, is to make an unflattering estimate of the appeal of our institutions to free minds.

And while the NFL is a private organization to which the first amendment does not directly apply—its use of taxpayer funds and receipt of tax benefits to build stadiums aside—the Court’s message is a relevant and poignant one.

The NFL’s anthem policy was enacted without the consultation of any players or the NFL Players Association. Further, the admonition that you either stand during the anthem or remain out of sight so as not to offend the sensibilities of the

NFL’s white fan base harkens back to a time when we were required to remain out of sight by being forced to enter establishments through the back door or sit in separate areas of buses, trains, restaurants, etc. lest white patrons feel uncomfortable. The NFL’s policy is clearly designed to impose upon you owners’ personal political views, as well as those of white fans who believe they are the arbiters of the time, place, and manner black people should object to racism.

You are men descended from an extraordinary, resilient, and courageous people. Those before us endured the most treacherous and inhumane treatment at the hands of people whom history has sanitized as mere patriots seeking better life in a new land, but who in truth were barbarians who perpetuated the genocide of one group of people, and the enslavement, murder, and complete dehumanization of another.

Yet our ancestors persevered, rebelled, and survived so that we would have the opportunity to become their wildest dreams.Taking up their mantle, our elders exposed themselves to and suffered enormous physical, economic, and psychological harm marching, demonstrating, sitting in, freedom riding, and committing sundry acts of resistance to challenge the same systemic racism faced by those before them. They did so not while making comfortable salaries or with influential platforms, but with everything to lose and only their dignity and a better tomorrow for us to gain. The mantle has now been passed to us.

During the 2016 and 2017 seasons, many of you peacefully protested centuries of racism and the continued deprivation of the rights, liberties, and privileges symbolized by the national anthem and the flag. This is evident in everything from housing to the justice system and the unlawful extrajudicial killing of unarmed black men and women while white mass murderers are brought in peacefully; to whites summoning law enforcement like a personal gang to intimidate and threaten us for [insert doing innocuous activity] While black. And our socio-economic status, education, sex, or age will not shield us from racism’s pernicious, destructive effects.

Refusing to play, especially if executed by multiple teams, is by far the most powerful action you could take, and the stance likely to yield results most quickly. It is analogous to a hold-out, except with a far more noble foundation. Your brothers on the University of Missouri football team—young men who had not yet entered the work force and thus had precious little to fall back on should their scholarships be revoked— demonstrated how effective such a protest could be. The decision may be a difficult one; but our ancestors and elders made difficult decisions as well. There hasn’t been a single substantive shift regarding racism in this country that did not involve acts of enormous courage, bravery, and willingness to sacrifice for a greater cause.
Refusing to stand for the national anthem is also a very strong response. Participation in the national anthem ceremony is essentially a personal invitation extended to every United States citizen. It is comparable to attending a non-religious event in which attendees are invited to pray. The decision not to participate is an individual one that is not anyone’s prerogative to even question, let alone either demand an explanation, or, worse, attempt to compel participation.

Raising a fist during the national anthem is yet another strong symbol of resistance, the most vivid example being the iconic image of John Carlos and Tommie Smith with their black glove clad fists held high in a “power to the people” salute during the 1968 Olympics in Mexico City, Mexico. Though one is generally standing for the anthem while doing so, it is imbued with the powerful statement that you will not be compelled into subordinated obedience.

There will be consequences regardless of the stance you take or which method you and your brothers, individually or collectively, settle upon. Even doing nothing opens the door to further abuses by the owners as this anthem policy inescapably probes what level of racist maltreatment you are willing to accept, and presents you with your Toby moment. Additionally, what’s to stop the NFL from making you recite a loyalty oath or perform some other gesture such as saluting to show your “respect for the flag?” And here is a hard truth. As with any group of oppressed people, there will be those among you for whom lack of intestinal fortitude, fear of not being liked or adverse consequences, and resigned subservience are guiding life principles. This is so despite their status as professional football players and, as such, among the strongest, most talented, intelligent, hard-working, and gifted men on Earth.

But there will also be those of you who are willing to accept our ancestors’ and elders’ mantle of fortitude, resilience, and bravery; face and conquer the natural fear associated with doing what is difficult but right; and reject this draconian attempt to suppress black dissent regarding our racist mistreatment in this country.

Those of you who choose to step up to this line of scrimmage will not be without protection and support. There are various legal theories and analyses which representatives and counsel may explore to support your refusal to play or stand during the anthem, or to raise a fist during the anthem. Also, the NFLPA has demonstrated a willingness to stand by you, and protect the exercise of your rights. Further, know that we the people are with you. We the people who are football fans that unflinchingly support your decision to protest; we the people who are not football fans, but who detest the existence of systemic racism; and we the people, your fellow black brothers and sisters, who too are intimately familiar with the scourge of racism, and thus understand that we are you and you are us. We are one.

This abuse of authority by the NFL as reflected in the promulgation of this policy is simultaneously an act of dominance and an act of cowardice. Dominance in its intent to impose the will of 32 owners, nearly all of whom are white, onto Black men challenging sustained, persistent racism. Cowardice in its spineless capitulation to Donald Trump’s vacuous criticisms, and the racist sensibilities of white fans who object to players straying from their designated role as entertainers who should “shut up and play football.” This policy, coupled with the ongoing exclusion of Kaepernick and Reid, while not violent like Bull Connor’s attack dogs and fire hoses, are no less racist and repugnant in their intention—to punish Black people who dare to stand against this country’s unabated refusal to extend to its Black citizens the full panoply of freedoms guaranteed by our founding documents here in the purported land of the free and home of the brave. It’s time to find your courage. Because if not now, when?

Kaia Wright is an attorney, activist, and retired U.S. Army officer. She is the Founder and Editor of Courage Under Fire, the nation’s only website dedicated to the national anthem protests against racism, at courageunder-fire.com. She may be reached via the website’s contact page or contact@courageunder-fire.com. Follow her and Courage Under Fire on Twitter @anthemprotest and Instagram @courage.under.fire.

Next post Four lessons the NFL could learn from ABC