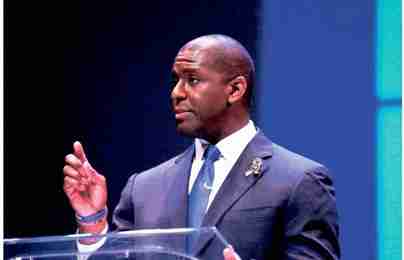 The two-hour event hosted at the Miramar Cultural Center gave nearly 800 attendees the opportunity to hear directly from each candidate on a variety of issues, including the ban of assault weapons, increasing the state’s minimum wage, affordable housing, criminal justice reform and more.

Billionaire and real estate investor Jeff Greene, who filed paperwork to run for governor earlier this month, did not participate in the debate. The two moderators jumped right into questions, beginning first with the issues of gun violence and gun control legislation.

Each of the candidates agreed that they would ban assault weapons as governor and vowed to increase background checks, while also working to invest more in resources for mental health.

“Senseless laws like stand-your-ground have no place in the state of Florida, and we ought to repeal it as soon as we can,” said Gillum, who acknowledged victims and family members impacted by the 2016 mass shooting in Orlando. “We know of the mass shooting incidents of Marjory Stoneman Douglas High, Pulse nightclub, the attempt at the Ft. Lauderdale airport, but what about the countless gun violence incidents that ravage neighborhoods and communities every day of the week?”

On the economy, the Democratic candidates were all in favor of raising the minimum wage.

Currently, a person making minimum wage earns an average of $17,000 annually, while the cost of living continues to increase for many Floridians.

Former U.S. Rep. Gwen Graham vowed to work toward raising the minimum wage to $15 per hour or more, acknowledging that many families across the state are still struggling to make ends meet.

“Almost 50 percent of the population in Florida is one paycheck away from financial ruin,” said the former congresswoman. “When I hear Rick Scott say ‘jobs, jobs, jobs,’ I hear yes – you’re going to have to work three jobs just to get by in the state of Florida.”

The candidates were also asked about affordable housing, specifically what they would do to ensure that low-income individuals throughout the state are not driven out of their communities if or when big companies such as Amazon, General Electric Co., and Google relocate to South Florida.

Orlando-native Chris King said the issue of affordable housing was what most inspired him to run for governor.

King, along with his fellow Democratic contenders, criticized Florida Republicans for diverting millions of dollars away from the Sadowski Trust Fund, a program designed to use money generated by documentary stamp taxes on real estate transactions to help fund and develop affordable housing.

“I’ve seen what it’s like when families are paying 50 or 60 or 70 percent of their income in rent. It’s tragic when you’re having to choose between housing and medicine or housing and food,” said King. “I believe that it’s the number one economic challenge of Florida, and we haven’t had anyone in Tallahassee for 20 years in leadership on the Republican Party who even talks about affordable housing. We need a governor who is going to be an innovator and a defender of families who are relying on us for safe, clean and quality affordable housing.”

One of the biggest topics of the night focused on criminal justice reform.

Florida has one of the highest incarceration rates in the nation, and many residents across the state have called for the end of private prisons, citing that they rely heavily on large prison populations in order to profit.

“Clearly, we all agree that these private prisons are horrible. We are giving companies an incentive to lock people up,” said Levine, who promised not to accept any funds from the private prison industry.

“It’s time that we legalize marijuana. We need to stop locking people up for petty crimes and cut the pipeline of African American men to prisons, and the only way that we’re going to be able to get there is to make sure that we offer greater economic opportunities,” said Levine.

South Florida is known as “ground zero” for Democrats, with Miami-Dade, Broward and Palm Beach counties accounting for more than 1.5 million registered Democrats within the state, according to the Florida Department of State.

Politico recently reported polls showing Levine ahead in the gubernatorial race, followed by Graham, Gillum, King and Greene respectfully. Two-term incumbent Republican Governor Rick Scott is term-limited and is ineligible for re-election. Primary elections for governor of Florida will take place on Aug. 28, with the general election slated for Nov. 6.