The veracity of Trump’s claims about black employment, wages and trade policy, nonexistent 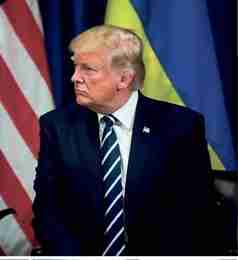 WASHINGTON – It was a week of exaggeration and outright fiction for President Donald Trump as he sought to push through a trade pact with Mexico, hyped numbers on jobs and raged against Google and the Russia investigation.

He wrongly describes the deal to replace the three-nation North American Free Trade Agreement as “one of the largest” and made a questionable assertion that he has unilateral authority to exclude Canada if it doesn’t agree to his terms.

Speaking in advance of Labor Day, Trump also declared that workers’ wages are “going up” when they really aren’t.

A look at the claims:

TRUMP, boasting about low unemployment rates: “This election is about jobs. And the beauty of the jobs, people that were stuck in one job, didn’t like it, they now got six different alternatives …They get one they like, and they are making more money. Wages are going up.” – Indiana rally Thursday.

THE FACTS: Wages aren’t going up when factoring in higher consumer prices.

The Bureau of Labor Statistics found that wages have declined in the past 12 months after adjusting for inflation, even with an expanding U.S. economy and strong corporate profits.

TRUMP: “The fact is that African/American unemployment is now the lowest in the history of our country.” – tweet Sunday.

THE FACTS: Not exactly. He omits important caveats.

Black unemployment did reach a record low, 5.9 percent, in May. But that figure is volatile on a monthly basis. That rate has since risen to 6.6 percent in July.

Trump is taking credit he doesn’t deserve for job growth, according to many economists who view the continued growth since the middle of 2009 as the primary explanation for the recent hiring. Meanwhile, there are multiple signs that the racial wealth gap is now worsening and the administration appears to have done little, if anything, to specifically address this challenge.

The most dramatic drop in black unemployment came under President Barack Obama, when it fell from a recession high of 16.8 percent in March 2010 to 7.8 percent in January 2017.

TRUMP: “There is no political necessity to keep Canada in the new NAFTA deal. If we don’t make a fair deal for the U.S. after decades of abuse, Canada will be out. Congress should not interfere w/ these negotiations or I will simply terminate NAFTA entirely & we will be far better off.” – tweet Saturday.

THE FACTS: Not so fast. It’s questionable whether Trump can unilaterally exclude Canada from a deal to replace the three-nation NAFTA agreement, without the approval of Congress. Any such move would likely face lengthy legal and congressional challenges.

Trump wants to get a trade deal finalized by Dec. 1.

Several Republicans in the closely divided Senate are insisting that a revised NAFTA deal include Canada.

Trump administration negotiations to keep Canada in the reimagined trade bloc are to resume this week as Washington and Ottawa try to break a deadlock over issues such as Canada’s dairy market and U.S. efforts to shield drug companies from generic competition.

THE FACTS: Not even close. The TransPacific Partnership, negotiated by the Obama administration, included the three NAFTA partners – United States, Canada and Mexico – plus Japan and eight other Pacific Rim countries. Trump withdrew the United States from the pact in his third day in office.

Even the TPP shrinks in comparison to the Uruguay Round of trade negotiations. Concluded in 1994, the round created the World Trade Organization and was signed by 123 countries. The Federal Reserve Bank of Boston found the following year that the WTO’s initial membership accounted for more than 90 percent of global economic output.

TRUMP: “We made the deal with Mexico. …We’re starting negotiations with Canada, pretty much immediately … It’s going to be a _ it’s a smaller segment, as you know. Mexico is a very large trading partner.” _ phone call Aug. 27 with Pena Nieto.

THE FACTS: Trump appears to be suggesting that Mexico is a bigger U.S. trading partner than Canada. That’s not the case. America’s two-way trade _ exports plus imports – came to $680 billion with Canada last year. That’s compared to $622 billion with Mexico.

TRUMP: “I smile at Senators and others talking about how good free trade is for the U.S. What they don’t say is that we lose Jobs and over 800 Billion Dollars a year on really dumb Trade Deals….and these same countries Tariff us to death.” – tweet Tuesday.

THE FACTS: The $800 billion is a reference to America’s trade deficit last year. But Trump exaggerates the size of the gap between what the U.S. sells and what it buys from the rest of the world. The trade deficit in goods and services came to $552 billion in 2017. The United States ran an $807 billion deficit in goods such as cars and machinery. But Trump ignored America’s $255 billion surplus in services such as education and finance.

Mainstream economists also take issue with Trump’s assertion that trade deficits amount to a loss for the United States.

The money didn’t just vanish. In exchange for what they spent on imports, Americans got the benefit of owning everything from made-in-China iPhones to French wine.

THE FACTS: Not according to Mexico. Immediately after Trump’s remarks, Mexican Foreign Minister Luis Videgaray tweeted to stress, once again, that his country won’t foot the bill for a wall along the U.S.-Mexico border.

Videgaray wrote that his country has been “absolutely clear” that Mexico “will NEVER pay for a wall.”

THE FACTS: The video is incorrect as to Trump.

There’s no dispute that Google promoted Obama’s State of the Union speeches from 2012 to 2016, according to webpages captured by the Wayback Machine, an internet archive site.

In a statement, Google said it has not historically promoted “the first address to Congress by a new president, which is technically not a State of the Union address,” so it didn’t do so in either 2009, when Obama first took office, or 2017, Trump’s first year as president.

For 2018, several web pages captured by Wayback Machine show the Google homepage advertising a livestream of Trump’s speech with the words: “Live! Watch President Trump’s State of the Union address on YouTube.”

The archive site shows the webpages in Greenwich Mean Time, which is several hours ahead of the Eastern time zone in the U.S. That means the relevant images of the Google homepage promoting Trump’s prime-time Washington speech on Jan. 30 are dated one day later, on Jan. 31, Mark Graham, director of the Wayback Machine archive site, told The Associated Press.

Trump’s tweet follows his accusations, made without valid evidence, that Google and other U.S. tech companies are rigging search results so that they highlight negative coverage about him.

TRUMP: “What’s going on at (at)CNN is happening, to different degrees, at other networks – with (at)NBCNews being the worst … When Lester Holt got caught fudging my tape on Russia, they were hurt badly!” – tweet Thursday.

THE FACTS: There is no evidence of the

NBC interview having been “fudged” or doctored in any way, and the White House didn’t respond to requests regarding what Trump was referring to. NBC declined to comment.

In the interview, Trump referred in part to “this Russia thing” as a consideration in his decision to fire Comey. Special counsel Robert Mueller is investigating possible obstruction of justice in the Russia probe.

It’s possible Trump is frustrated that other comments from the same interview may have received less attention.

Minutes after he acknowledged that “this Russia thing” was on his mind when he fired Comey, Trump also acknowledged that he knew the decision to terminate him might actually prolong the investigation. In fact it did, with Mueller investigating the firing for potential obstruction.

TRUMP: “Hillary Clinton’s Emails, many of which are Classified Information, got hacked by China. Next move better be by the FBI & DOJ or, after all of their other missteps (Comey, McCabe, Strzok, Page, Ohr, FISA, Dirty Dossier etc.), their credibility will be forever gone!” _ tweet Wednesday.

THE FACTS: Trump’s own law enforcement agencies dispute that.

Trump appears to be citing a story by the right-leaning Daily Caller publication, which reported that a Chinese-owned company in Washington, D.C., area hacked Clinton’s email server.

But FBI and Justice Department officials have said publicly that there was no evidence Clinton’s server was hacked by a foreign power.