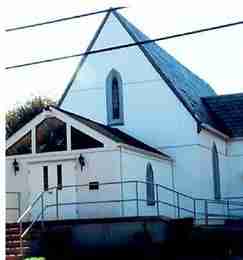 OAKMONT, Pa. (AP) – When Dorothy Griffin saw her beloved church burn down nearly four years ago, her heart broke. But not her faith.

“We were planning a special service that Sunday,” said Griffin, 91, the oldest member of St. Paul Baptist Church in Oakmont. “It was our pastor’s anniversary … I knew in my heart that we had to rebuild, and I believed in my heart that God was going to enable us to rebuild.”

The congregation did, with the help of other churches and organizations throughout the borough.

“Three and a half years was a challenge,” Deacon William Kemp said. “With our spiritual strength and our spiritual ties, we all stayed together as a congregation. Being led by Pastor (Reid) Greene, he blessed us with the strength to keep us all together.

“We watched from spring to summer to fall to winter anticipating (the new church). We got to this point here. It’s a wonderful feeling.”

A fire on Sept. 19, 2014, destroyed the church near the corner of Second Street and Delaware Avenue.

The congregation of about 100 held services and Bible study at the Riverview Community Action Corp. facility across the street while it embarked on the reconstruction project. Virginia-based Church Development Services did the work.

The new church is 94 feet by 48 feet, with a 29-foot steeple, seating for 136 and meets all Americans with Disabilities Act requirements, CEO Glen Trematore said last month.

A recognition service earlier this month recognized the carpenters, masons and others who built the new church, as well as the emergency responders who were at fire.

“It’s really been overwhelming,” said Ralph Livsey, chairman of St. Paul’s board of trustees. “We have been working nonstop for the last three weeks day and night trying to prepare for the service, plus finish putting the church together … We just finished moving all of the stuff over here from RCAC and purchased all this furniture. We’re still trying to get appliances hooked up and still have a ways to go yet.”

The Rev. Mitchel Nickols of the Bibleway Church in New Kensington was the guest speaker at the dedication ceremony, which featured choirs from St. Paul, Oakmont Presbyterian and Oakmont United Methodist churches.

The message of unity was evident throughout Sunday. More than 100 people attended morning service with even more at the afternoon dedication.

“God has just one army of willing soldiers, and we’re going to stand united,” said Greene, who thanked everyone involved in the project and those who supported the church throughout the years.

“We survived because it’s God’s will that this church be here,” Griffin said.

“I’m going to do the best I can do and support the church the very best I can.”

According to the “African American Historic Sites Survey of Allegheny County,” the old church was built in 1874 by an Episcopal congregation. St. Paul’s congregation, Oakmont’s first black church, formed in 1905 and bought the wood frame structure in 1924.

A month before the fire, former longtime pastor Rev. Morgan James Reynolds died at the age of 93. He had served as pastor at St. Paul Baptist for more than 40 years, from 1966 to 2009.