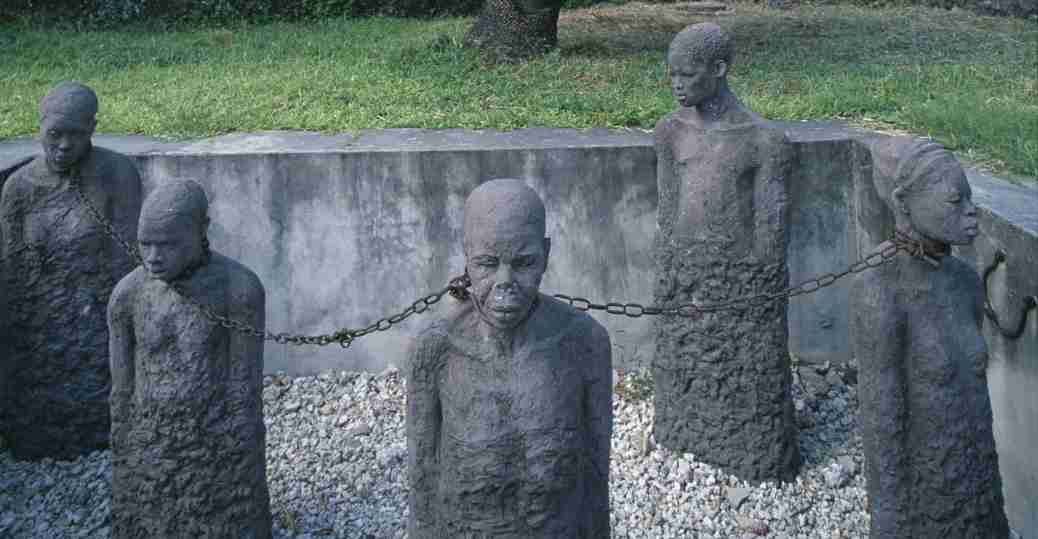 Liverpool, England (AP) – Scarlet shackles sit peacefully on display in front of a sad, gray backdrop. The now rusted leg irons once locked human ankles during 18th century voyages from Africa to some European port, then to the Americas.

Who the shackles held remains a mystery. But as a citizen of the United States, I’ve likely broken bread with a descendant of the woman forced to wear this instrument. Maybe my uncle fought alongside her kin in a war. Or it’s possible one of her distant relatives is now my relative.

These are the thoughts I entertained recently while walking through the reflective International Slavery Museum in Liverpool, England.

Founded in 2007 on the bicentenary of the abolition of the British slave trade, the museum sits just a short walk from the dry docks where slave trading ships were repaired and ﬁtted out in the 1700s. It’s also close by The Beatles Story, the world’s largest permanent exhibition purely devoted to the hometown band. Once a major slaving port, Liverpool grew thanks to merchants’ ﬁnancial ties to the enslavement of people to the Americas.

Today, the building tells the story of the enslavement of people from Africa and how this British city beneﬁted from human bondage.

The Liverpool location reclaims a space once connected to worldwide human suffering and is similar to O Mercado de Escravos – the slavery museum in Lagos, Portugal – where the European slave trade reportedly began.

But Liverpool’s museum is much larger, more interactive, and more ambitious without being exploitative.

Inside, visitors immediately are taken on a meditative experience focusing on Africa before European contact. You are greeted by quotes of American abolitionists and civil rights leaders etched into stone walls before you see traditional masks from present-day Sierra Leone and Mali. There are vibrant textiles from Ghana, intricate headdresses from Cameroon and samples of Igbo wall painting from Nigeria. You can listen to samples of drum signals from the Republic of Congo or a Mbuti hunting song.

The messages are clear: Before enslavement, Africa was a diverse and complex continent with long artistic and religious traditions.

Visitors next are whisked toward a room tackling enslavement and the brutal Middle Passage. Racial ideologies and Europe’s unfamiliarity with the cultures of Africa sparked the slave trade which grew once European powers expanded to the Americas, the museum tells us. In this room, details of the voyage of the ship Essex are reconstructed. That’s a slave ship that left Liverpool on June 13, 1783, just nine years after the American Declaration of Independence. During the Middle Passage portion, visitors encounter shackles and chains used in forts and castles along the African coast to hold humans before their horriﬁc journey. A small replica of a slave boat illustrates how captives were tossed into small compartments. Next to the ship are 18th-century whips and branding irons. Yes, these were used.

Then, there was resistance, liberation, and the long ﬁght for civil rights. Surprising, I walked into an area dedicated to African American heroes from Harriet Tubman to the Rev. Martin Luther King. Jr. and Malcolm X. U.S. news footage from the 1950s and 1960s illustrates how the descendants of those who crossed the Middle Passage had to ﬁght for human rights and against violence amid white supremacy – the ideology that launched racialized slavery in the ﬁrst place. There also are photos of the civil rights struggles in the United Kingdom, from London’s “Keep Britain White Rally” in 1960 to the Toxteth Riot of 1981 in Liverpool over allegations of police harassment.

The museum ends with a space for changing exhibits related to the themes around modern-day slavery. During my visit in November, I encountered an exhibition called “Am I not a woman and a sister” – a moving image installation by England-based artist Elizabeth Kwant. She co-created the project with female survivors of modern-day slavery in partnership with Liverpool charity City Hearts. The project links current human trafﬁcking to the story out of the Middle Passage.

In the U.S., journalist Nikole HannahJones has sparked conversations about the legacy of slavery in that nation’s history with her interactive 1619 Project in The New York Times. It examines the 400th anniversary of the arrival of the ﬁrst enslaved people from West Africa on the present-day America’s eastern shore. The project challenges readers to consider how their own lives have been shaped by the legacy of slavery and it is helping inspire activists in places like Albuquerque, NM, to push for their own museum of black history.

Walking by an installation of former slave and abolitionist Olaudah Equiano, I heard two young black women discussing the 1619 Project and the criticism it faced for trying to reshape a narrative in the U.S. As we left, we passed a display of a 1920-era Ku Klux Klan robe and hood. The outﬁt that once terrorized stared back at us. The glass case surrounding it protected us. We were safe for now.