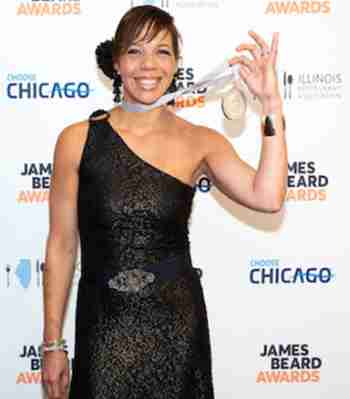 TOP HONOR: Chef Nina Compton, who moved from Miami to New Orleans in 2015 to open Compère Lapin, is the first black woman to receive the prestigious James Beard award.

New Orleans, LA — New Orleans’ Chef Nina Compton of Compère Lapin restaurant made history by becoming the first black woman to be designated as the best chef in the South at the 2018 James Beard Awards.

The James Beard Foundation awards are considered the Oscars of the culinary world. Only five black chefs have ever been a Best Chef finalist; this year’s ceremony was the first to recognize black women – Mashama Bailey, of the Savannah restaurant The Grey, and Nina Compton, of Compère Lapin, in New Orleans – as finalists.

Boston-based food writer, Korsha Wilson reports, “Compton’s speech placed her immigration story front and center: “I never dreamed, coming from a very small island of St. Lucia, of winning this award,” she said at the podium. Her New Orleans restaurant, Compère Lapin, is named for a character in Creole and Caribbean folk tales; on the menu, she blends Caribbean and Southern food with French technique.”

Compton is a native of St. Lucia who moved from Miami to New Orleans in 2015 to open Compère Lapin, which draws from her Caribbean heritage along with her French and Italian experiences. She was a contestant on Bravo’s “Top Chef: New Orleans.” Compère Lapin is a sophisticated eatery serving New Orleans accented flavors in the Old No. 77 Hotel & Chandlery located on 535 Tchoupitoulas Street in the city’s warehouse district.

“What makes these wins particularly poignant is that chefs Rodney Scott, Nina Compton, Edouardo Jordan, and Dolester Miles are cooking interpretations of their unique history, from the present moment in the part of America where they live. Their complicated and beautiful act of reclaiming black foodways and serving it to the public is too powerful to understate. They’re chefs who are making food that represents them — people who are connected to and inspired by the African diaspora,” Wilson added.

New Orleans’ blacked-owned restaurants have received significant recognition from the organization, on January 28, New Orleans’ Chef Leah Chase was named the recipient of the 2016 James Beard Lifetime Achievement award. The foundation awards the Lifetime Achievement award “upon a person in the industry whose lifetime body of work has had a positive and long-lasting impact on the way we eat, cook, and think about food in America.” Known as the “Queen of Creole Cuisine,” Leah Chase is a chef, restaurateur, and TV personality revered by many as one of the best in her profession.

Established in 1990, the James Beard Awards recognize culinary professionals for excellence and achievement in their fields and further the Foundation’s mission to celebrate, nurture, and honor America’s diverse culinary heritage through programs that educate and inspire.

Taylor Sylvain is a senior journalism student attending Clark Atlanta University’s Division of Communication Arts in the department of Mass Media Arts and serves as an intern for The New Orleans Agenda. A native of New Orleans, she especially enjoys assignments dealing with the city’s art, culture, fashion and the music industry. Taylor may be reached via email through SylvainSolutions@msn.com.