‘ALIEN: COVENANT’ IS A GOOD SEQUEL 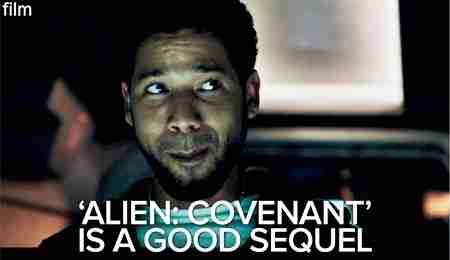 In my blossoming romance with the sci-fi genre, I’m finding that there are films that I’ve misjudged (ahem: “Star Trek”). I can see why so many people (ahem: Trekkies) love the genre.

Even watching shows on the Syfy channel has given me a newfound appreciation for a genre that is usually set in the distant future and features technology that hasn’t been invented yet.

It is also constantly making commentary on humanity versus machines and the evils that mankind is capable of committing on its own; which are the plot points that I’ve gravitated toward the most.

For instance, in the prequel franchise series for “Alien,” the filmmakers are constantly seeking answers about where we come from. However, every time they seem to make headway in finding answers, ancestral biological weapons rear their ugly, eyeless heads and the humans (humanity) are left fighting for their lives. It was that way in 2012’s “Prometheus” and it’s the same for this year’s “ALIEN: COVENANT.”

Directed by Ridley Scott and written by John Logan and Dante Harper (with a story by Jack Paglen and Michael Green based on characters created by Dan O’Bannon and Ronald Shusett), “ALIEN: COVENANT” follows a group of exhibitionists who are hoping to colonize a distant planet like earth. This planet is so far away from earth that the crew and colonists (along with over 2,000 embryos) must be in hyper sleep for almost eight years in order to reach it.

Unfortunately for them, a radio transmission cuts their journey short by seven and a half years and they decide to colonize a closer planet with earth-like atmospheric qualities.

Despite requisite fearless female Daniels (played by Katherine Waterston) being against it, Captain Oram (Billy Crudup) decides that it’s better to cut corners than stay the course.

When they arrive on the near planet, they encounter the same weapons that Dr. Elizabeth Shaw (Noomi Rapace) encountered in “Prometheus” just on a larger scale. We also get to find out what happened to Dr. Shaw after she escaped.

What’s always been great about every “Alien” film in the franchise is its focus on female empowerment. The women are tough and courageous. They are fighters who won’t back down from a threat. And, they are smart leaders.

It’s refreshing in a time where men seem to be spending a little too much time telling us what to do with our bodies. I doubt they would have the guts to tell someone like Daniels about her body.

While Waterston gives a stellar performance in this film, she pales in comparison to Fassbender who must play two different versions of the same android.

That’s no easy feat, seeing as the androids have slight differences, like accents, demeanor and preferred style of dressing. The androids also must have intense conversations with each other where they are on opposing sides of the same subject.

Not many actors can pull off believable slow burn conflict with themselves. Fassbender’s androids are shaping up to be classic characters that will forever remain in pop culture lore.

(Spoiler alert! Skip to the last paragraph) In “Prometheus,” the humans are on a quest to find the “engineers” who supposedly created humankind. Unfortunately, these engineers were preparing to make humans extinct.

This time, in Covenant, the humans are attempting to move forward instead of backward and trying to recreate civilization in another part of the galaxy; not knowing about the engineers.

Fassbender’s David wants the same things, but his methods for exploring the new frontier turn him into a mad scientist who’s unable to be stopped. He also represents why humanity must be careful when creating the latest technology.

Now, I may be a novice when it comes to sci-fi entertainment and I’ve only scratched the surface of knowing the difference between “Alien” and “Predator,” but I can say with assurance that “Covenant” is a good film; especially when compared to other sequels in other genres.

It’s got a formidable villain with a good amount of twists to keep its audience guessing. It feels like the start of a beautiful relationship.

You may reach Kim Grant at Kaliciag@aol.com.