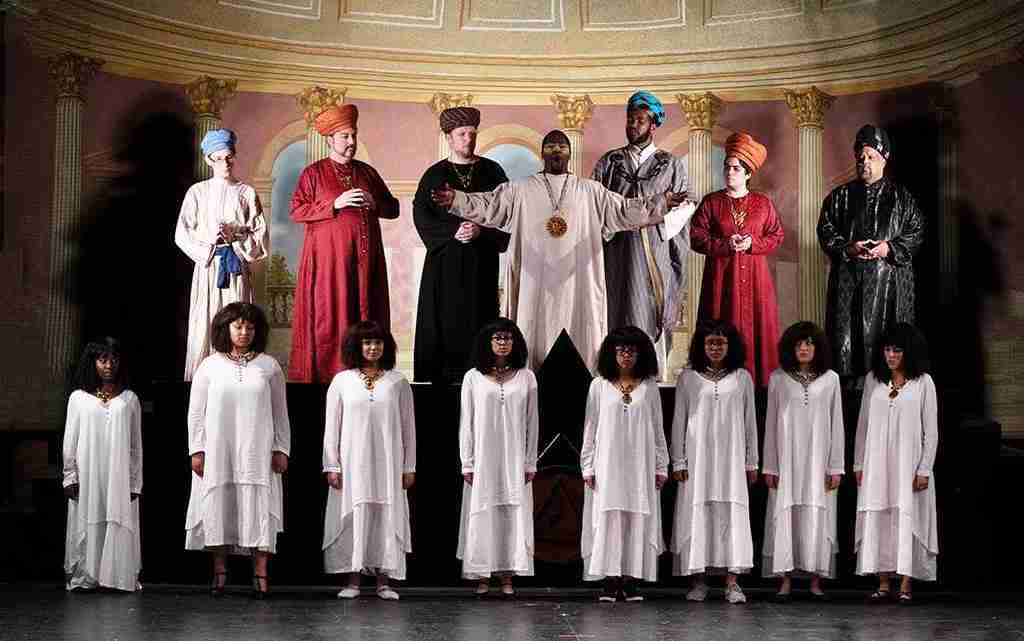 Orchestra Miami staged Mozart’s last opera, The Magic Flute, at the Scottish Rite Temple in downtown Miami last weekend. Mozart, a freemason himself, wrote this opera with Masonic symbolism throughout which both music historians and conspiracy theorists have been writing about for centuries.

The opera begins with Tamino, well played by Gregory Schmidt, being chased by a dragon. The local Asian Association donated a long dragon that literally wrapped around the orchestra seats. Tamino, then meets a bird-brained sort of man named Pagageno, three ladies, and the Queen of the Night who shares a picture of her daughter, the lovely Pamina played by Soprano Yunah Lee. Tamino falls in love and vows to save Pamina from the clutches of the seemingly evil Sarastro. Both Tamino and Papageno go to find their quest and have to complete three trials to win over their lovers, Pamina and Papagena.

Unlike most operas, the story ends without bloodshed; a great treat for younger audiences.

“The audience is always the character that changes,” said Emmy award-winning director David Grabarkewitz, who flew in from Texas to stage the performance. In this case, the audience was quite diverse: young children, teens, and whole families.
The Magic Flute, which was first performed by Mozart in 1791, is a “singspiel” opera that in English means “sing-play,” said Grabarkewitz. He reinterpreted some of the established English translations to produce both lyrics and dialogue with “a few modern touches.”

This writer heard a touch of Shakespeare in the dialogue and was not surprised when Grabarkewitz admitted that the flowing iambic pentameter was from his many years as a well-trained Shakespearian actor.

“The fully staged production was several years in the making,” said Orchestra Miami’s artistic director Elaine Rinaldi. Back in 2007, Rinaldi teamed up with Grabarkewitz to produce The Magic Flute for Intermezzo Opera, a concert performance of songs from the opera.

Listening to a true coloratura soprano can keep you on the edge of your seat with wonder. Miamiborn Melissa Ruiz as the Queen of the Night did exactly that in her last aria with her daughter Pamina. Ruiz, who began vocal lessons at sixteen, hits high-F’s in four seemingly effortless arpeggios.

Bass-baritone Neil Nelson has a marvelous voice as Sarastro. His aria, “Oh Isis and Osiris,” was very moving; his voice resonant and audible in the lower register. Privately, he mentioned that he had been away from opera for ten years coaching football. His commanding voice undoubtedly held the attention of those young football players, but opera audiences around the world need to hear it too.

Papageno is a comic character who flitters in fear like a bird and faints like a woman during his trials. Gabriel Preisser played this physically demanding role superbly; acting with his voice, face and body in perfect balance. His comfort and spontaneity on stage showed when a lock for his mouth did not reach its goal. “You missed,” he quipped to the laughter of the audience.

The show calls for three young “boys” to accompany Papageno and Tamino on their quest. The two boys and one girl cast in the roles were excellent in their singing and presence on stage.

One tradition of freemasonry is not a deep secret. For some reason the number three is prevalent in all their rituals and symbolizes balance and order in the mind of the freemason. To enter a Masonic temple requires three raps on the door, so I’ve heard.

Orchestra Miami did three performances of this mystical folk opera. Three may suffice for the Masons, but for this excellent production it wasn’t enough.