Bosh says he built a life in Miami, stays put with the Miami Heat 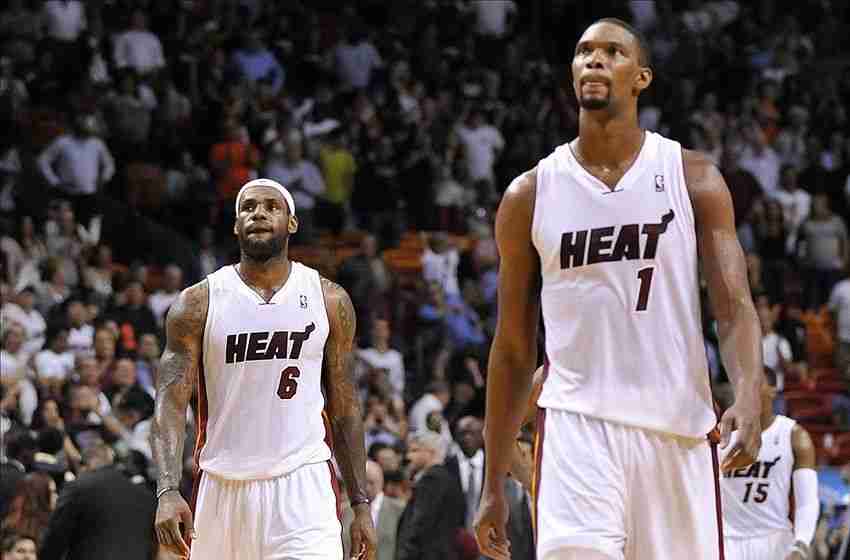 MIAMI — Half a world away, Chris Bosh could not escape the frenzy of last week. An offer from the Houston Rockets was waiting. His longtime Miami teammate LeBron James was leaving. For a few moments, Bosh found himself wondering if his days with the Heat were over.

Then he looked at his family – and everything stopped.

“We’ve built a life in South Florida and we’re comfortable so I had to do what’s best now for myself and my family,” Bosh said Sunday.

With that, his decision became very easy. Bosh is signing a $118 million, five-year, deal to stay with the Heat, a formality held up only by the logistical challenge presented by his being in Ghana and with more exotic stops on a family vacation still to come before returning home.

When he finally puts pen to paper, the Heat locker room will essentially become his – and, in an interview with The Associated Press, Bosh said that while it’s a shock to realize James is no longer with Miami after four seasons, he’s ready to have that voice.

“I can’t lie to you; I’m excited. I’m excited for the challenge,” Bosh said during a break from NBA Africa duties. “I want to step up to the challenge. I feel this is a chance to prove to myself and others that I can still do this.

“I want to see if I can do what’s necessary to go in there and win every night. That’s the challenge of being a leader. It excites me. It’s been a long time and I feel like I’m a much better player and a leader now, so it’ll be fun.”

Bosh had that role in Toronto before coming to Miami, then was perceived as a No. 3 behind James and Dwyane Wade when they teamed up in 2010 to begin the “Big 3” era with the Heat.

Now, Bosh will be one of the league’s highest-paid players over the next five seasons and with that comes a responsibility role to lead.

“It’s a very different process but I think I know how to do it,” he said.

The Heat called James’ decision  to return to the Cleveland Cavaliers disappointing and Bosh acknowledged that there was a “shock factor” when he heard. But Miami is moving on.

They’ve locked Bosh up, closed a new deal with Wade, got a commitment Sunday from small forward Luol Deng, are talking about retaining point guard Mario Chalmers and have deals pending with forwards Josh McRoberts and Danny Granger.

Miami has been to the NBA Finals in each of Bosh’s first four seasons there, the team’s two-year run as champions coming to an end when the Heat lost in five games to San Antonio last month.

Bosh got over that loss fast.

“We weren’t going to beat those guys,” Bosh said. “They were clicking on all cylinders. … You can accept losing to such a great team.”

After that, free agency followed. Bosh, Wade and James met last month for lunch, one that created tons of speculation once word got out about the meal.

Bosh said much of what was reported was overblown and that was the day he started thinking the Big 3 run was over.

“It’s not what everybody thought it was,” Bosh said. “We were just talking and having lunch with each other. Did I expect to kind of figure things out? Yeah, for sure. But it wasn’t that. We just enjoyed having lunch. That’s when I could tell there’s a possibility that somebody could be in a different uniform next year.”

“I’d be lying if I sat here and said Houston wasn’t enticing,” Bosh said. “You look at their roster and you can kind of see why it makes sense for them to be interested in me, with the chance they have to be successful. They’re going to be a good team regardless next year. It just seemed like I would be that final piece that they needed. It was a hard choice to turn down.”

Bosh insists the Heat will be good next season. How good will largely be up to him.

“We have so much chemistry,” Bosh said. “We’ll just be continuing without LeBron. It’s starting a different chapter. It’s exciting. I think it should be motivation for everybody to step up to the plate. We’re fortunate enough to have some of the same guys. We should be able to say, ‘Hey, we can come out here and compete no matter what happens.’”