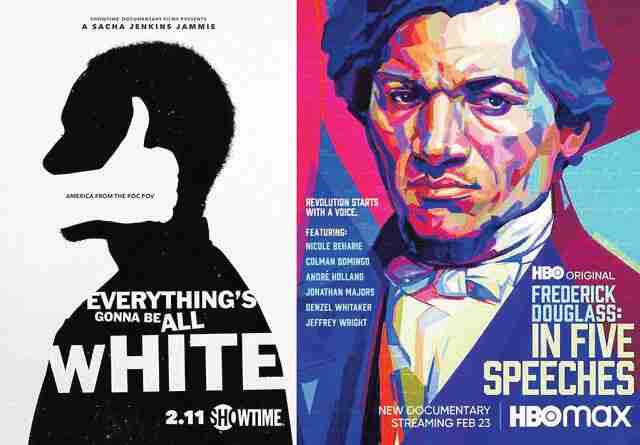 Los Angeles (AP) – How U.S. history is told and taught is being challenged and potentially constricted on several fronts, but television’s approach to Black History Month is ﬁrmly in overdrive.

There’s a wealth of provocative and creative Black-focused programs in February, looking deep into the past to examine topics such as the roots of slavery and the achievements of towering ﬁgures including Frederick Douglass. Freshly painful chapters including the 2012 killing of Trayvon Martin in Florida also get attention. The post-George Floyd onset of racial reckoning and the subsequent backlash have coincided with the growth of streaming and its voracious need for content, a two-fold incentive for TV to pay heed to the sweep and nuance of Black experience.

With broadcast networks and cable channels trying to keep pace with flush streaming services, there’s an impressive ﬁeld of documentaries, proﬁles and more ahead. Among the highlights (all times are Eastern): “One Thousand Years of Slavery,” Smithsonian Channel, Feb. 7-28. The four-part docuseries takes a global look at forced labor, examining its effect on people and societies. Prominent ﬁgures including Debbie Allen, Valerie Jarrett, Lorraine Toussaint and U.S. Sen. Cory Booker seek out their legacy from slavery as the program explores Africa, the Caribbean and elsewhere in an effort to look anew at history. The series from Angela Bassett and Courtney B. Vance’s production company “stretches the canvas beyond the 400 years we’ve traditionally learned about” U.S. slavery, Bassett said in a statement. Vance narrates the series airing each Monday this month.

“everything’s gonna be all white,” Showtime, 8 p.m., Friday, Feb. 11. An inventive, lively and trenchant assessment of race in American history from the perspective of people of color. The three-part docuseries delves into topics including racial identity, the ongoing effects of racism on housing, education and health care and efforts by Indigenous people to protect their land. Historians, artists, activists and others weigh in, including Ibram X. Kendi, Jemele Hill, Favianna Rodriguez and Margaret Cho. Director Sacha Jenkins has described the series as embodying “the collected feelings of folks of color in America…. this is how America has treated us. This is how we feel.”

“American Masters: Marian Anderson: The Whole World in Her Hands,” PBS, Feb. 8, (check local listings). A study of the artist and civil rights advocate’s life, career and legacy, the ﬁlm has the advantage of her speaking as well as singing voice. Anderson recorded more than 30 cassette tapes of interviews in the 1950s in preparation for writing a memoir and they, along with other archival material, were used to “explore history from her point of view,” director Rita Coburn said in a statement. The ﬁrst Black performer in a leading role at the Metropolitan Opera, Anderson made an indelible stand for civil rights and human dignity in 1939 when she was barred from one venue and instead sang to the world from the Lincoln Memorial.

“Proﬁled: The Black Man,” Discovery+, Feb. 12-March 5. The four-part docuseries uses historical footage, interviews and commentary to spotlight the difﬁculties confronting Black men over the decades and those who overcame them. The hourlong episodes each address a stubborn stereotype that pigeonholes Black males: dangerous, absentee fathers, detractors of Black females, unemotional. Actor Tristan “Mack” Wilds is the host, with activists DeRay Mckesson and Tamika Mallory and actor Billy Porter among those sharing their perspectives.

“Oscar Micheaux: The Superhero of Black Filmmaking,” TCM, 9:30 p.m. Feb. 13. The documentary about early 20th-century movie pioneer Micheaux is part of the channel’s monthlong tribute to Black achievement in ﬁlmmaking. TCM host Jacqueline Stewart and other experts will discuss ﬁlms including 1963’s “Lilies of the Field” (8 p.m. Sunday, Feb. 6) starring Sidney Poitier, the ﬁrst Black winner of the Oscar for best actor. David Oyelowo, who played Martin Luther King Jr. in “Selma,” will join Stewart on Feb. 20 for the airing of Ava DuVernay’s 2014 ﬁlm (8 p.m.) and on Feb. 27 for the doublebill of Spike Lee’s 1992 “Malcolm X” (8 p.m.) starring Denzel Washington and the 1968 Agnes Varda documentary “Black Panthers” (11:30 p.m.).

“Frederick Douglass in Five Speeches,” HBO, 9 p.m. Feb. 23. Jeffrey Wright and others bring to life the quintet of key speeches by Douglass, who escaped slavery and became an abolitionist, renowned orator and writer. Denzel Whitaker performs the 1841 speech Douglass gave at an antislavery convention, an early public recounting of his life as a slave, with Nicole Beharie delivering “What, to the Slave, is the Fourth of July?”, an 1852 address by Douglass aimed at reminding his fellow citizens that Black people remained enslaved a quarter-century after the Declaration of Independence was signed. Scholars David Blight and Henry Louis Gates Jr. and a Douglass descendent are among those offering context.

“Trayvon Martin: 10 Years Later,” CBS News Streaming Network and Smithsonian Channel on Feb. 26; BET at 8 p.m. on Feb. 28. Gayle King anchors the special that revisits the 17year-old’s fatal shooting in Sanford, Florida, by George Zimmerman and its part in what would become the Black Lives Matter movement. Trayvon’s mother, Sybrina Fulton, and members of Mothers of the Movement, a support group she founded for those who have lost children to gun violence or police, are interviewed along with social activists, lawyers and others. The special also examines how Trayvon’s death and Zimmerman’s acquittal fanned a new wave of activism among pro athletes.