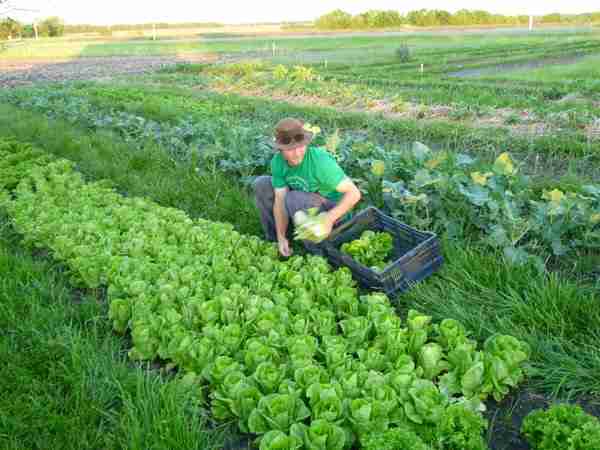 By TYLER SILVY
The Greeley Tribune

GREELEY, Colo. (AP) _ “It,” for Leslie Trejo and a handful of University of Northern Colorado undergraduates, is a new, hands-on summer course called urban farming. “It,” involves a 5,000-square-foot greenhouse and three-quarters of an acre of outdoor gardening space in north Greeley on O Street. And “it,” it turns out, is a lot more fun that sitting in an air-conditioned classroom.

“It’s hands-on,” Trejo said by way of explanation. “I absolutely love coming out here and doing something rather than sitting in a classroom.”

The urban farming class goes out to the WiseAcres greenhouse on O Street twice per week. There’s also 4,000 square feet of planting space on UNC’s campus. Students plant and transplant, and they ensure their plants are growing well. It’s hard work, even if it isn’t “farming” in the traditional sense.

“It’s fundamentally about building organic farming skills,” said Kevin Cody, UNC professor. “We’re operating at a scale that’s obviously well beyond even a sort of backyard farmer, but not nearly at an industrial scale.”

For his part, Cody wasn’t farm raised either. He’s a California import who will be a full-time environmental sustainability professor at UNC in the fall. His story, although not his specific background, is kind of the norm in urban farming courses and majors across the U.S. — at least generally speaking.

“I can say that in my previous work, it’s not atypical for beginning farmers to not come from farm backgrounds,” Cody said. “A lot of new and aspiring farmers these days are from maybe sort of middle class, suburban backgrounds — college educated, environmental science degrees — something to that effect.”

Although he has extended family members in the business, Sogge said he doesn’t have much personal experience with farming. The goal, for Sogge, is similar to that of others involved in the class — and the larger sustainability movement.

“We need resources to survive as a human race,” Sogge said. “But we also have to be conscious about not over-using.”

Cody said one of the short-term goals for the urban farming class is to make the resources work for them. When the tomatoes and peppers are ready, Cody said the class hopes to hit up some farmers markets. Entrepreneurship is one piece of the class, which is also about 20 percent online.

In the future, that could expand to weekly farmers markets, as well as a program to supply UNC’s cafeterias with UNC-grown food. That future, though, depends on resources all its own.

The urban farming class is sort of a pilot program — guaranteed for only this year.

The student-administered Leadership for Environmental Action Fund at UNC provided about $10,000 in grant money to pay for the lease of the O Street farm, which Aims Community College science lab coordinator Kirsten Daniels owns.

UNC chips in about $13,000 more to pay Cody and Daniels to help run the farm. Future funding will be determined once Cody and his class get out of the mud.

“It’s based on future funding,” Cody said. “In the fall, once things start to wind down, the next phase will be looking for outside funding through grant applications. The university seems eager to support the work that we’re doing.”