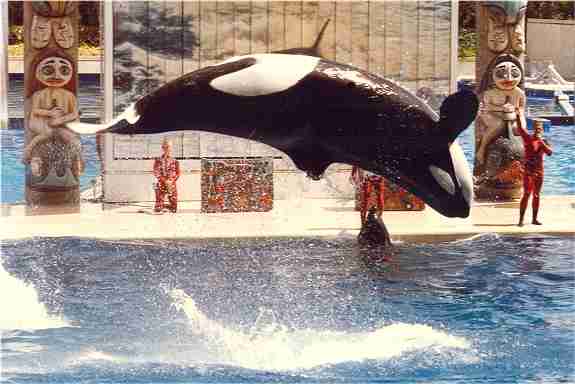 The show that featured killer whales cavorting with trainers and leaping high out of the Shamu Stadium pool will have its final performances on Sunday.

This summer, the park will unveil a new attraction in the revamped pool. Orca Encounter is being billed as an educational experience that will show how killer whales eat, communicate and navigate.

The animals will still receive cues from trainers, however.

“You will still see a whale leaping out of the water,” Al Garver, a former orca trainer and vice president of zoological operations, told the San Diego Union-Tribune (http://bit.ly/2i2Mxo4 ). “We want to be able to demonstrate behaviors people would see in the wild with the killer whales and their abilities as a top predator in the sea. The vast majority of behaviors people have seen in our shows will be very suitable for demonstrating that.”

Under pressure from activists and faced with declining ticket sales, SeaWorld Entertainment Inc. announced last year it was ending its theatrical orca shows and breeding program.

Parks in Orlando and San Antonio will end their shows by 2019.

SeaWorld has seen attendance fall since the 2013 documentary “Blackfish” criticized conditions of captive orcas, implying that confinement made them more aggressive.

“Blackfish” chronicled the life of Tilikum, an orca that killed a SeaWorld trainer during a performance in Orlando in 2010.

The movie’s director has told CBS that the new show was designed to make the audience feel better, not the animals.

SeaWorld reported Friday that Tilikum, who was believed to be about 36 years old and in poor health, had died in Orlando.

SeaWorld Entertainment Inc. announced last month that it was eliminating 320 jobs across its 12-park company. The company also announced that it would help develop its first SeaWorld park without orcas, in Abu Dhabi.

Next post New Year, New You: What to Know Before Taking Vitamins or Supplements

Previous post Jeans that give directions? Products get, um, 'smart' at CES