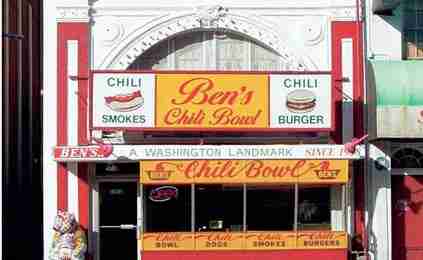 WASHINGTON (AP) – It’s not easy to keep a business going for 60 years, and it’s hard to become a local landmark beloved by everyone from presidents to the neighborhood kids. But Ben’s Chili Bowl has managed both.

The history-laden eatery stands as a testament not only to its own history but that of the neighborhood around it. Over the past 60 years, the area around 12th and U streets in Northwest D.C. has gone from a bustling entertainment and cultural district known as Black Broadway, to a battle-scarred ruin in the wake of the uprising following the assassination of Dr. Martin Luther King Jr., to a thrumming, pricey area today.

And through it all, Ben’s Chili Bowl has been one of the constants. In the last few years, the Ben’s empire has expanded greatly, with new locations in the District and Virginia, including some spots befitting its status as a regional icon. But at the original U Street location, patrons still eat from the well-loved menu of half-smokes, chili cheeseburgers, shakes and more under the photos of entertainers, intellectuals, sports stars and presidents who have headed to Ben’s over the decades.

To celebrate the 60th anniversary this past Wednesday, D.C. threw a ceremony renaming the 1200 block of U Street as Ben’s Chili Bowl Way.