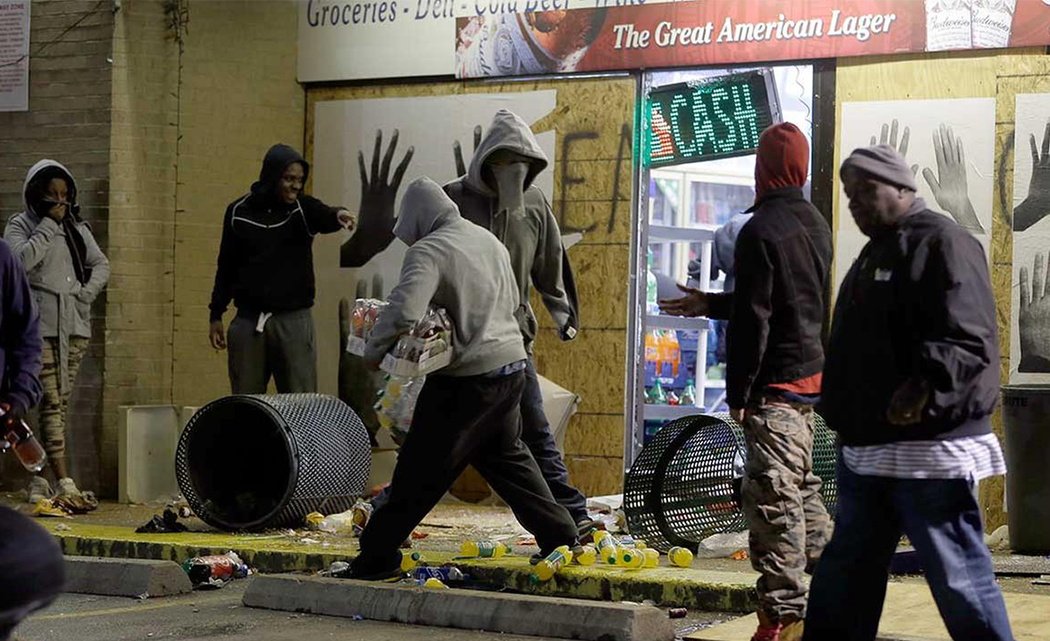 By JIM SALTER and JIM SUHR

FERGUSON, Mo. (AP) — National Guard reinforcements helped contain the latest protests in Ferguson, preventing a second night of the chaos that led to arson and looting after a grand jury decided not to indict the white police officer who killed Michael Brown.

Demonstrators returned Tuesday to the riot-scarred streets. But with hundreds of additional troops standing watch over neighborhoods and businesses, the protests had far less destructive power than the previous night. However, officers still used some tear gas and pepper spray, and demonstrators set a squad car on fire and broke windows at City Hall.

Since the grand jury’s decision, protesters in cities throughout the country have rallied behind the refrain “hands up, don’t shoot,” and drawing attention to other police killings. As the tension in Ferguson eased somewhat, officer Darren Wilson broke his long public silence, insisting on national television that he could not have done anything differently in the confrontation.

The toll from Monday’s protests — 12 commercial buildings burned to the ground, plus eight other blazes and a dozen vehicles torched — prompted Missouri governor Jay Nixon to send a large contingent of extra National Guard troops.

The governor ordered the initial force of 700 to be increased to 2,200 in the hopes that their presence would help local law enforcement keep order in the St. Louis suburb.

“Lives and property must be protected,” Nixon said. “This community deserves to have peace.”

Guard units protected the Ferguson Police Department and left crowd control, arrests and use of tear gas to local officers. In one commercial area Wednesday morning, a soldier was stationed at every few storefronts, and some were on rooftops.

Forty-five people were arrested, most for failure to disperse. Outside police headquarters, one woman was taken into custody after protesters hurled what appeared to be smoke bombs, flares and frozen water bottles at a line of officers. Several other protesters were arrested after defying police instructions to get out of the street or out of the way of police vehicles.

Protesters threw rocks, tent poles, and bottles — some containing urine — at officers. As the crowd dispersed early Wednesday, some threw rocks through the windows of a muffler shop and a used-car dealership near a painted mural that read “Peace for Ferguson.”

Some streets that had been overrun the previous night were deserted, except for the occasional police cruiser or National Guard vehicle. Some Guard crews monitored empty parking lots.

Large demonstrations were held throughout the country for a second day Tuesday. Some were peaceful, such as in New York, where Union Square was the jumping-off point for a large protest that splintered into smaller groups that walked to places like Times Square and the entrances of the Williamsburg and Manhattan bridges. Hundreds of Seattle high school students walked out of classes, and several hundred people marched down a Cleveland freeway ramp to block rush-hour traffic.

Other events weren’t as calm. In Oakland, California, a crowd of protesters smashed windows at car dealership, restaurants and convenience stores. A rally that drew thousands in Minneapolis took a turn when a car struck a protester and drove through a pack of others. And in Portland, Oregon, police used pepper spray and made arrests after about 300 people disrupted bus and light rail traffic by walking across a Willamette River bridge.

During an interview with ABC News, Wilson said he has a clean conscience because “I know I did my job right.”

Wilson, 28, had been with the Ferguson police force for less than three years before the Aug. 9 shooting. He told ABC that Brown’s shooting was the first time he fired his gun on the job.

Asked whether the encounter would have unfolded the same way if Brown had been white, Wilson said yes.

Attorneys for the Brown family vowed to push for federal charges against Wilson and said the grand jury process was rigged from the start to clear Wilson.

“We said from the very beginning that the decision of this grand jury was going to be the direct reflection of the presentation of the evidence by the prosecutor’s office,” attorney Anthony Gray said. He suggested the office of the county’s top prosecutor, Bob McCulloch, presented certain testimony to discredit the process, including from witnesses who did not see the shooting.

Brown’s parents made public calls for peace in the run-up to Monday’s announcement, and on Tuesday, their representatives again stressed that the people setting fires were not on Michael Brown’s side.

Videos that were widely circulated on Tuesday showed Brown’s mother, Lesley McSpadden, standing atop a car and breaking down as the announcement of the grand jury decision blares over the stereo.

Her husband, Brown’s stepfather, comforts her, then begins angrily yelling “Burn this bitch down!” to a crowd gathered around him. Asked about the comment at a news conference, family attorney Benjamin Crump said the reaction was, “raw emotion. Not appropriate at all. Completely inappropriate.”

Testimony from Wilson that he felt threatened, and physical evidence almost certainly complicates any efforts to seek federal charges.

Under federal law, “you have to prove as a prosecutor that the officer knew at the moment that he pulled the trigger that he was using too much force, that he was violating the Constitution,” said Seth Rosenthal, a former Justice Department civil rights prosecutor.

The Justice Department has also launched a broad probe into the Ferguson Police Department, looking for patterns of discrimination.

Attorney General Eric Holder said the department aims to complete those investigations as quickly as possible “to restore trust, to rebuild understanding and to foster cooperation between law enforcement and community members.”

Regardless of the outcome of the federal investigations, Brown’s family also could file a wrongful-death lawsuit against Wilson.

Speaking in Chicago, President Barack Obama said “the frustrations that we’ve seen are not just about a particular incident. They have deep roots in many communities of color who have a sense that our laws are not always being enforced uniformly or fairly.”