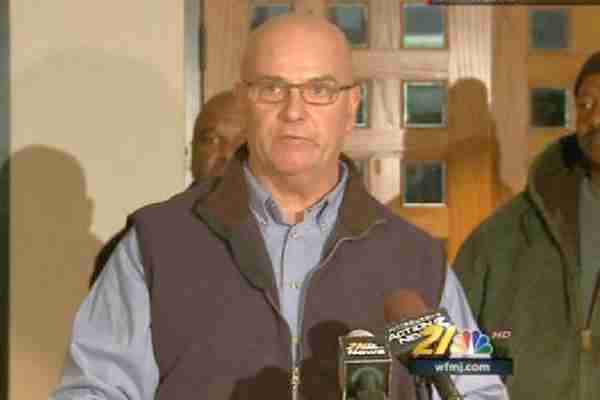 Chief Thomas Burke has resigned from the Farrell, Pennsylvania Police Department over a racist email he circulated to the community.

“Even $1.00 will be greatly appreciated. Them Sharon n—-rs gotta learn how to read,” the email stated.

Burke’s  email was full of spelling and grammatical errors. It was sent to dozen of citizens and community leaders and urged them to make a donation to local reading program.

Burke is the former police chief of the nearby Sharon, Pennsylvania Police Department. He was hired to head the newly created department in Farrell.

Farrell is located about an hour’s drive northwest of Pittsburgh. Until the end of the year, the city’s law enforcement is provided by a regional police force, that is disbanding. A new Farrell police force is planned to replace the regional force on January 1, 2016.
Sharon’s population is 50 percent black.
After learning of the email from area news reports, Farrell Mayor Olive McKeithan, who is black, initially defended Burke.
“Until you get to know a man’s character, you can’t judge him by one off-the-cuff remark, or else we would have to judge all white people as equally guilty,” McKeithan was quoted on November 23. “I have spoken with Mr. Burke and consider the matter as closed.”
As pressure from other commissioners and outrage from the community mounted, McKeithan had an about face and called Burke and asked him to resign.
The president of the Mercer County NAACP, Monica Gregory, spoke out against Burke’s choice of language, stating that there needs to be “regulations” in place to stop people in positions of power from using racial slurs.

Previous post As many African-American see it, there are 2 Ben Carsons