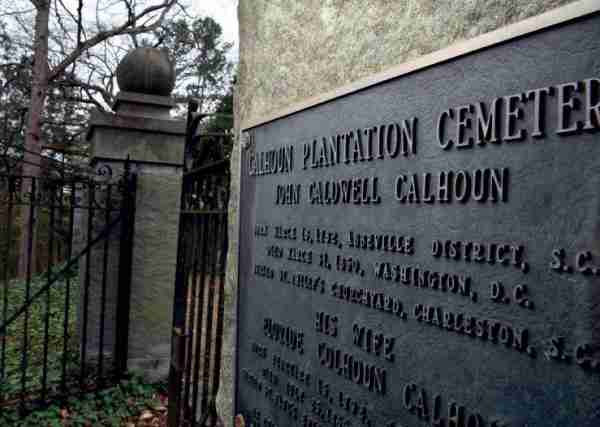 CLEMSON, S.C. (AP) – Created in the early 20th Century, Woodland Cemetery is a burial ground for prominent Clemson University ﬁgures – presidents, professors and football coaches are all buried in the hilltop plot beside Memorial Stadium.

The Calhouns, the family who founded Fort Hill plantation, are buried atop the steep incline, their graves enclosed by a wrought iron fence.

Venture a few hundred yards down the unpaved road from the cemetery’s stone gates, however, and ﬁnd the unmarked graves of the enslaved peoples once owned by the Calhouns.

Located on the southern slope of “Cemetery Hill,” the unmarked burial ground contains the remains of an estimated 200 to 250 enslaved African Americans and convict laborers who lived, worked and died on the land housing Clemson University, according to Will Hiott, Executive Director of Historic Properties at Clemson.

Sarah Adams learned about the burial ground on a tour inspired by the Call My Name project from Dr. Rhondda Thomas, whose research focuses on documenting the legacy of African Americans at Clemson University.

“I was extremely disheartened by the lack of respect for the people buried there,” Adams, a junior at Clemson University, said.

Historic Properties put up a temporary sign stating, “Site of Unknown Burials circa 1865” on the fence surrounding the burial ground in 2015, Hiott said. By 2020, the sign had disappeared, he added.

Adams’ roommate, Morgan Molosso, went out to see the burial ground after her friend told her about it.

What she saw – a well-kempt, mostly white cemetery with careful landscaping towering above a muddy hillside housing the unmarked graves of enslaved African Americans – disgusted her, she said.

“It was the most blatant piece of racism I’ve seen on Clemson’s campus,” the junior said.

Together, the two students have formed a group of about 50 people that seeks to honor and remember the enslaved peoples and laborers buried at Cemetery Hill.

Once the coronavirus pandemic passes and campus is open to students and faculty again, Adams said the group will work with university staff to design and install a permanent memorial at the site.

“And we want to have the space maintained and cleaned up to the same level as the ofﬁcial Woodland Cemetery to the right of it,” Adams said.

Already, the group has accomplished half their mission: they met with Clemson landscaping staff this semester, who told The Mail they are committed to caring for the burial ground going forward.

“Our plan going forward is to enhance this space with ornamental plantings and increase the frequency of landscape maintenance at this site,” said Tommy Fallaw, Director of Custodial, Landscape and Recycling Services.

Wary of being dubbed “white saviors,” Adams and Molosso sought out Thomas and Hiott’s expertise before pursuing any plans or requests of the university.

“It was genuine for us, but we didn’t to come across as not being genuine,” Adams said.

According to research by Thomas, at least 129 enslaved peoples lived and worked at Fort Hill between 1825 and 1865, when the 13th Constitutional Amendment abolished slavery.

The “potter’s ﬁeld” where many of those slaves are buried used to be an orchard for the plantation, Hiott said. The graves are marked by headstones and footstones jutting out of the soft ground. Several are visible, but Hiott said many could lie below the ground’s surface, covered by shifting soil and “They are not inscribed, but they are what had marked burials at one time in the past,” Hiott said.

The plot also houses the remains of the next iteration of free labor used at Clemson: convict laborers.

Between 1890 and 1915, an unknown number of convict laborers built ofﬁces, cleared land and farmed crops on Clemson University’s campus, according to the Call My Name website.

The laborers, who were leased to the newly created Clemson College by the state government, were mostly black men convicted of crimes ranging from theft to murder, according to Call My Name.

There is proof convict laborers were buried on Cemetery Hill, Hiott said. A clipping from the Pickens Sentinel, dated Thursday, Oct. 8, 1891 says, “three or four have died at this camp and were buried in the graveyard once used for servants of the Calhoun estate.”

Attempts have been made to commemorate the unmarked graves for nearly 80 years.

In the 1940s, a board of trustees committee unanimously approved erecting a permanent monument “to indicate this coloured graveyard,” at Cemetery Hill, Hiott said.

Other attempts were made over the years, but it wasn’t until 2016 that permanent signage indicating the burial ground’s existence came as part of the board of trustees’ History Taskforce, on which Hiott served as chairman.

The task force’s marker is two-sided: the Woodland Cemetery is described on the front side, with an acknowledgment of the slave and convict burial ground on the back, facing away from the one-way road cars use to access the cemetery.

“I think it’s good that that marker is there, but it’s awful that it’s on the back and that you really don’t see it,” Adams said.

The marker is placed at the stone gated-entrance to Woodland Cemetery, a few hundred yards away from the burial ground.

Additional markers were placed across campus in 2016 to acknowledge the history of enslaved Africans, convict laborers and the Native American settlement that existed before the founding of Fort Hill Plantation.

Adams and Molosso see their push to honor the remains at the slave and convict burial ground as an extension of the History Task force, which called for Clemson to discuss and honor their full history – “All of its fullness, the bad parts, the good parts,” Adams said.

“I think that this initiative is part of that, you have to talk about the fact that we walk around on a plantation grounds. of this.”

You have to talk about all of this.