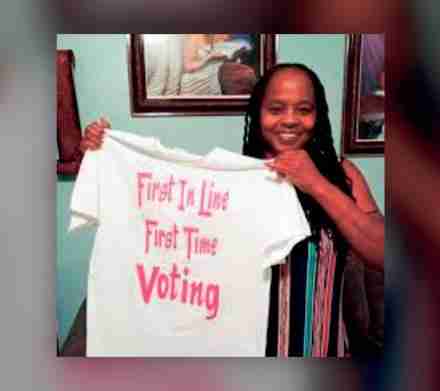 Tallahassee, Fla. (AP) – A high-stakes federal trial opened Monday that could allow hundreds of thousands of felons to regain the right to vote in Florida, a battleground state that is expected to hold considerable sway in the November elections.

The state is home to about 1 million felons, possibly many more, who would represent a sizable voting bloc in any election and could help influence the outcomes of razor-thin elections that have become common in a crucial state.

According to a study submitted as evidence in the trial being heard in U.S. District Court in Tallahassee, some 774,000 felons – perhaps more – across Florida’s 67 counties are ineligible to vote because of ﬁnancial debts.

At issue is Amendment 4, a voter-approved ballot measure that gave felons the right to vote.

After voters approved the initiative in 2018, Florida’s Republican-controlled Legislature passed a bill signed by Gov. Ron DeSantis stipulating that felons must pay all ﬁnes, restitution and other legal ﬁnancial obligations before their sentences will be considered fully served.

Lawyers for the plaintiffs described the ﬁnancial stipulation as taxes imposed by Florida lawmakers as a condition for accessing the ballot box, a burden they said disproportionately blocks blacks and the poor from voting.

“They didn’t just put a price tag on voting. The evidence will show they created a system where returning citizens can’t even tell what the price is,” said Sean Morales-Doyle of the Brennan Center for Justice, among the groups representing plaintiffs.

“We’re talking about the voting rights of three-quarters of a million people. Obviously, that’s enough to determine plenty of local or statewide, or even wider, elections,” Julie Ebenstein, a senior staff attorney with the American Civil Liberties Union, said before the trial. The ACLU also represents some of the plaintiffs in the case.

Mohammad Jazil, an attorney for the governor and the secretary of state’s ofﬁce, said the intent of Amendment 4 was clear to voters: The ballot measure restores voting rights to felons after they complete all terms of their sentence, including parole and probation.

“That language is unambiguous,” he asserted at trial. “That language includes the payment of ﬁnes, fees, costs, restitution and all other ﬁnancial terms of the sentence before the restoration of voting rights.”

The Florida Supreme Court sided with DeSantis and his secretary of state, Laurel Lee, when it concluded in an advisory opinion in January that “all terms of sentence” means satisfying all legal ﬁnancial obligations imposed with by a guilty verdict.

“The system is not perfect, but the system gets it right most of the time,” Jazil said.

That statement brought a rebuke from Professor Dan Smith, the chair of the University of Florida’s political science department, who testiﬁed on behalf of plaintiffs in what is now a consolidated class action lawsuit against the state of Florida.

He said the state should “get it right all of the time,” and testiﬁed about how onerous the challenge is for some felons to not only pay their ﬁnancial obligations but to even ﬁnd out what they owe because there is no central database that tracks the information.

In October, Hinkle issued a preliminary injunction against some parts of that new law. And in February, a threejudge panel of the 11th Circuit let the injunction stand. Last month, an Atlanta-based appellate court declined to hear a further appeal backed by the governor.

At a hearing last fall, Judge Hinkle suggested that Florida can prevent felons access to the ballot box if they have the means to repay outstanding ﬁnancial obligations but refuse. But he likened the state’s ﬁnancial requirement to a poll tax if it continues to deny the vote to felons too poor to fully settle up.

Next post Over 3,300 inmates test positive for COVID-19 in four U.S. state prisons, 96% show no symptoms

Previous post Ex-U.S. Rep Brown gets out of prison early amid COVID-19 precautions