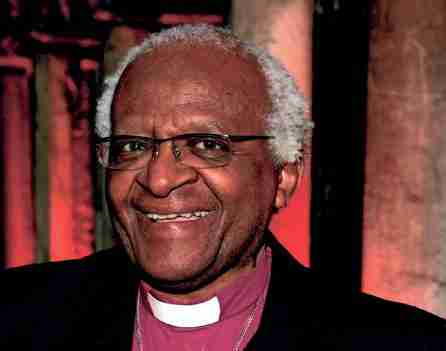 Desmond Tutu, South Africa’s Nobel Peace Prize-winning icon, an uncompromising foe of apartheid and a modern-day activist for racial justice, was among the many noteworthy people who died in 2021.

The buoyant, blunt-spoken clergyman used his pulpit as the ﬁrst Black bishop of Johannesburg and later as the Anglican Archbishop of Cape Town, as well as frequent public demonstrations, to galvanize public opinion against racial inequity, both at home and globally.

Tutu, who died Sunday at 90, worked passionately, tirelessly and nonviolently to tear down apartheid – South Africa’s brutal, decades-long regime of oppression against its Black majority that ended in 1994.

Political ﬁgures the world said goodbye to this year include former U.S. Secretary of State Colin Powell, who died in October. A trailblazing soldier and diplomat, Powell rose to the rank of four-star general in the Army before becoming the ﬁrst Black chairman of the Joint Chiefs of Staff. Under former President George W. Bush, he became the nation’s ﬁrst Black secretary of state.

In the leadup to the U.S. invasion of Iraq, Powell cited faulty information during a United Nations Security Council address while claiming Hussein had secretly stashed weapons of mass destruction.

Also among those who died this year was a man who held the title of baseball’s home run king for years. Hank Aaron, who died in January, endured racist threats on his path to breaking Babe Ruth’s record and is still considered one of the game’s greatest players.

Those from the world of arts and entertainment who died this year include actor Cicely Tyson, rappers DMX, Biz Markie, reggae musician Bunny Wailer, and singer Pervis Staples.

Here is a roll call of some influential ﬁgures who died in 2021 (cause of death cited for younger people, if available):

Eric Jerome Dickey, 59. The bestselling novelist who blended crime, romance and eroticism in “Sister, Sister,” “Waking With Enemies” and dozens of other stories about contemporary Black life. Jan. 3. Cancer.

Meredith C. Anding Jr., 79. A member of the “Tougaloo Nine,” who famously participated in a library “read-in” in segregated Mississippi about 60 years ago. Jan. 8.

Hank Aaron, 86. He endured racist threats with stoic dignity during his pursuit of Babe Ruth’s home run record and gracefully left his mark as one of baseball’s greatest all-around players. Jan. 22.

Cicely Tyson, 96. The pioneering Black actor who gained an Oscar nomination for her role as the sharecropper’s wife in “Sounder,” won a Tony Award in 2013 at age 88 and touched TV viewers’ hearts in “The Autobiography of

John Chaney, 89. One of the nation’s leading basketball coaches and a commanding ﬁgure during a Hall of Fame career at Temple. Jan. 29.

Leon Spinks, 67. He won Olympic gold and then shocked the boxing world by beating Muhammad Ali to win the heavyweight title in only his eighth pro ﬁght. Feb. 5.

Chick Corea, 79. He was a towering jazz pianist with a staggering 23 Grammy Awards who pushed the boundaries of the genre and worked alongside Miles Davis and Herbie Hancock. Feb. 9. Cancer.

Kenneth C. Kelly, 92. A Black electronics engineer whose antenna designs contributed to the race to the moon, made satellite TV and radio possible and helped NASA communicate with Mars rovers and search for extraterrestrials. Feb. 27.

Vernon Jordan, 85. He rose from humble beginnings in the segregated South to become a champion of civil rights before reinventing himself as a Washington insider and corporate influencer. March 1.

Bunny Wailer, 73. A reggae luminary who was the last surviving founding member of the legendary group The Wailers. March 2.

Yaphet Kotto, 81. The commanding actor who brought tough magnetism and stately gravitas to ﬁlms including the James Bond movie “Live and Let Die” and “Alien.” March 15.

Elgin Baylor, 86. The Lakers’ 11-time NBA All-Star who soared through the 1960s with a high-scoring style of basketball that became the model for the modern player. March 22.

DMX, 50. The iconic hip-hop artist behind the songs “Ruff Ryders’ Anthem” and “Party Up (Up in Here)” whose distinctively gruff voice and thoughtful messages in his rhymes made him one of rap’s biggest stars. April 9.

Walter F. Mondale, 93. The former U.S. vice president was a liberal icon who lost one of the most lopsided presidential elections after bluntly telling voters to expect a tax increase if he won. April 19.

Lloyd Price, 88. The singer-songwriter was an early rock ‘n’ roll star and enduring maverick whose hits included such up-tempo favorites as “Lawdy Miss Clawdy,” “Personality” and the semi-forbidden “Stagger Lee.” May 3.

Pervis Staples, 85. His tenor voice complimented his father’s and sisters’ in the legendary gospel group The Staple Singers. May 6.

Paul Mooney, 79. A boundary-pushing comedian who was Richard Pryor’s longtime writing partner and whose sage, incisive musings on racism and American life made him a revered ﬁgure in stand-up. May 19. Heart attack.

Lee Evans, 74. The record-setting sprinter who wore a black beret in a sign of protest at the 1968 Olympics then went onto a life of humanitarian work in support of social justice. May 19.

Consuewella Dotson Africa, 67. A longtime member of the Black organization MOVE and mother of two children killed in the 1985 bombing of the group’s home in Philadelphia. June 16. Merle Smith Jr., 76. The ﬁrst Black cadet to graduate from the Coast Guard Academy. June 16. Complications from Parkinson’s disease and COVID-19.

Jovenel Moise, 53. The Haitian president was a former banana producer and political neophyte who ruled for more than four years as the country grew increasingly unstable. July 7. Assassinated at his home.

Gloria Richardson, 99. An influential civil rights pioneer whose determination not to back down while protesting racial inequality was captured in a photograph as she pushed away the bayonet of a National Guardsman. July 15.

Biz Markie, 57. A hip-hop staple known for his beatboxing prowess, turntable mastery and the 1989 classic “Just a Friend.” July 16.

Floyd Cooper, 65. An award-winning illustrator and author of children’s books whose mission to offer candid and positive images of Black history included subjects ranging from Frederick Douglass to Venus and Serena Williams. July 16.

Robert Parris Moses, 86. A civil rights activist who was shot at and endured beatings and jail while leading Black voter registration drives in the American South during the 1960s and later helped improve minority education in math. July 25.

Dennis “Dee Tee” Thomas, 70. A founding member of the long-running soul-funk band Kool & the Gang known for such hits as “Celebration” and “Get Down On It.” Aug. 7.

Sonny Chiba, 82. The Japanese actor who wowed the world with his martial arts skills in more than 100 ﬁlms. Aug. 19.

James W. Loewen, 79. His million-selling “Lies My Teacher Told Me” books challenged traditional ideas and knowledge on everything from Thanksgiving to the Iraq War. Aug. 19.

Hissene Habre, 79. Chad’s former dictator, he was the ﬁrst former head of state to be convicted of crimes against humanity by an African court after his government was accused of killing 40,000 people. Aug. 24.

Ed Asner, 91. The burly and proliﬁc character actor who became a star in middle age as the gruff but lovable newsman Lou Grant, ﬁrst in the hit comedy “The Mary Tyler Moore Show” and later in the drama “Lou Grant.” Aug. 29.

George M. Strickler Jr., 80. A civil rights attorney who fought to desegregate Southern schools in the 1960s and was pushed out of his University of Mississippi teaching job amid uproar over his work on behalf of Black clients. Sept. 2.

Melvin Van Peebles, 89. The groundbreaking ﬁlmmaker, playwright and musician whose work ushered in the “blaxploitation” wave of the 1970s and influenced ﬁlmmakers long after. Sept. 21.

Theoneste Bagosora, 80. A former Rwandan army colonel regarded as the architect of the 1994 genocide in which more than 800,000 ethnic Tutsi and Hutus who tried to protect them were killed. Sept. 25.

Colin Powell, 84. The trailblazing soldier and diplomat whose sterling reputation of service to Republican and Democratic presidents was stained by his faulty claims to justify the 2003 U.S. war in Iraq. Oct. 18.

Jerry Pinkney, 81. A prize-winning children’s book illustrator known for his richly textured images of Black life, fables and fairy tales in works ranging from “The Lion and the Mouse” to “The Sunday Outing.” Oct. 20.

William Sterling Cary, 94. A pioneering minister and civil rights activist who was the ﬁrst Black person in prominent church leadership roles, including president of the National Council of Churches. Nov. 14.

Phil Saviano, 69. A clergy sex abuse survivor and whistleblower who played a pivotal role in exposing decades of predatory assaults by Roman Catholic priests in the United States. Nov. 28.

Lee Elder, 87. He broke down racial barriers as the ﬁrst Black golfer to play in the Masters and paved the way for Tiger Woods and others to follow. Nov. 28.

Bob Dole, 98. He overcame disabling war wounds to become a sharptongued Senate leader, a Republican presidential candidate and then a symbol of his dwindling generation of World War II veterans. Dec. 5.

Kangol Kid, 55. A member of the legendary hip-hop group UTFO, whose real name is Shaun Shiller Fequiere, died after a battle with colon cancer. Dec. 18.

Drakeo the Ruler, 28. The West Coast rapper whose real name was Darrell Caldwell was fatally stabbed in an altercation at a Los Angeles music festival where he was scheduled to perform. Dec. 18.

Desmond Tutu, 90. The Nobel Peace Prize in 1984 highlighted his stature as one of the world’s most effective champions for human rights. Tutu died peacefully at the Oasis Frail Care Center in Cape Town, his trust said. He had been hospitalized several times since 2015 after being diagnosed with prostate cancer in 1997. Dec. 26