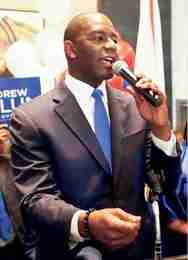 FORT LAUDERDALE, Fla. – Democrats are still celebrating Andrew Gillum’s historic win on August 28, when the 39year old mayor of Tallahassee became Florida’s first black gubernatorial nominee of any major party. With a stunning come-from-behind victory, Gillum clinched the Democratic primary with a last-minute surge that put him over the top in the race to become Florida’s next governor. Political pundits are still analyzing his monumental upset in the Democratic Party, as he beat out opponents with far more money and/or name recognition.

“This is not my moment. This is OUR moment,” Gillum said during his victory speech. “This proves that you can come from the bottom, from a working- class family, and end up at the top. We’re in this place because of everyday people.”

He beat out four other opponents, all of whom had significantly more campaign funding.

Jeff Greene, a billionaire, came in fourth place. Gwen Graham, daughter of former Florida governor Bob Graham, had been leading the group much of the election cycle. She came in second, while Philip Levine, former mayor of Miami Beach, came in third. Chris King came in fifth place.

Graham, Levine and Greene had TV ads running round the clock.

Gillum now faces what is expected to be a fierce battle against Donald Trump-backed candidate Ron DeSantis in November.

Gillum, who has the support of Bernie Sanders, said he is energized and ready for the fight.

“We’re going to unite this state in such a way that is unparalleled in the state of Florida. The dark days coming out of Washington and the division coming out of the White House, we’re going to remind this country that we can be united,” Gillum said.

While Gillum did indeed rally the minority vote, he also rallied voters in some white areas too. CNN political analyst Van Jones said

Gillum is a one-of-a-kind candidate who can garner the vote from all races and ethnicities. “For anyone who thinks Gillum can only get the black vote, you’re wrong,” Jones said on CNN Tuesday night.

Gillum said he now understands what his grandmother meant when he was younger.

“She would anoint my head with oil, then tell me to go out and get my education, not just for my family, but for everyone. “I believe my grandma was saying ‘It ain’t about you, it’s about all of us.’ Now we’ve got to commit ourselves to bring it home, not just for me, but for all of us!” he said. With his wife by his side, Gillum added, “She’s going to be an amazing first lady of Florida.”

Among some of his campaign promises are criminal justice reform, a living wage and increased pay for teachers.

“What’s beneath my name, is that we need to pay teachers what they’re worth. It’s those same public-school teachers who poured into me, telling me I could do it!”

He said he’s also committed to establishing a living wage.

“Anybody who works a full-time job, working 40 hours a week, should earn a wage they can live off of. I’m proposing $15 an hour for those people.”

In the end, even Gillum’s opponents are rallying behind him. At his concession speech, Levine said it’s a great time in Florida history that the first black gubernatorial nominee has been elected. He and

Graham say they’ve asked their supporters to back Gillum; who said King has pledged his support as well.

Included in his thanks were supporters from his alma mater, Florida A & M University.

“My FAMU family has held me,” said Gillum.

He is expecting to prevail in November.

“I sincerely believe that what is going to deliver us to victory is that there are hard-working people in this state who think they deserve a voice in their government and we’re going to give it to them.”