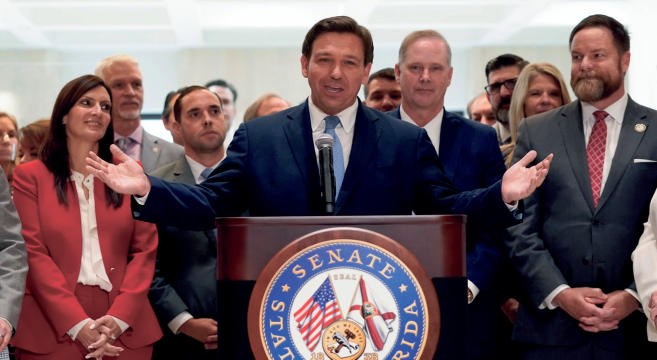 Last fall, DeSantis moved Florida into Phase 3 of re-opening the state to a level of pre-pandemic normalcy. In Phase 3, statewide restrictions on restaurants, clubs, and bars were suspended and encouraged to open to a 50% capacity, but it was within the jurisdiction of the local governments to place their own restrictions upon these establishments based on covid case numbers and deaths in their own communities. With the swipe of a pen, and next to zero input from local municipalities, DeSantis has impudently pushed Florida toward a full re-opening amid an uncontrolled pandemic.

5,864,861 have been fully vaccinated. That narrows down to about 27% of Floridians are fully vaccinated against the virus that causes COVID19. “We’ve embraced the vaccines, we’ve embraced the science” DeSantis boldly announced. But the facts prove that Floridians have not “embraced” the COVID-19 vaccine as the gov. suggested. With the suspension of local COVID-19 mandates that includes social distancing, mask wearing, and the limiting of people congregating indoors, the science submits that COVID-19 infection rates will increase, hospitalizations will explode, and the resulting deaths will escalate.

The science that DeSantis is basing his decision to suspend COVID-19 emergency mandates on speciﬁcally states that those who are fully vaccinated have a chance of being exposed to the virus and can transfer it to those who are not vaccinated. While it is possible for those who are fully vaccinated to return to pre-pandemic activities, the truth of the matter is that for the most part, 70% of the Florida population remains unvaccinated. The CDC guidelines for Americans who are fully vaccinated surmise that they “should still protect” themselves and others in many situations by wearing a mask that ﬁts snugly against the sides of your face and doesn’t have gaps” avoiding “large indoor gatherings,” and washing hands frequently. Wearing a mask is not “policing people.” It is believing in the science. What DeSantis calls “extraordinary measures” is following the science as outlined by the CDC.

“This legislation ensures that legal safeguards are in place so that local governments cannot arbitrarily close our schools or businesses,” DeSantis continued before also signing SB 2006, which goes into effect on July 1, 2021, which outlines that “political subdivision has the burden of proving the proper exercise of its police power in the issuance of certain emergency orders.”

What SB 2006 essentially does is attempt to strip the powers of local government in issuing emergency directives that directly impact the public health and safety of the communities in which they serve. St. Petersburg Mayor Rick Kriseman strongly criticized DeSantis’ move to override local governmental authority saying that the action is more about politics and the ﬁduciary bottom line instead of public health and safety. “Instead of the legislature and the gov. pre-empting cities and counties, they should be calling us all up and saying thank you to cities and counties,” Kriseman said at a press conference held after the gov. ’s own press conference. “What could have happened in the state of Florida as far as the number of hospitalizations and the number of deaths didn’t happen because of the actions cities and counties took, that this legislation directly addresses and – in vast large part – would prohibit us from doing.”

Rep. Charlie Crist, who announced Tuesday his plans to make another run for gov. in 2022, was also critical of the new executive orders. “Gov. DeSantis’ actions today strip local leaders of their ability to make decisions that protect their citizens. It’s government overreach at its worst. Gov. DeSantis is enabling the spread of the coronavirus while Florida is seeing 5,000 new cases of coronavirus daily and nearly 36,000 people tragically lost,” Crist said in a statement. “Gov. DeSantis failed to lead during the pandemic, leaving local ofﬁcials as the last line of defense against the pandemic, forcing them to make the hard decisions to save lives.”

It was DeSantis who told Floridians on March 4, 2020 that “the risk of contracting COVID-19 was low.” While COVID-19 cases intensiﬁed, it was DeSantis’ reluctance to issue a statewide stay at home order that forced counties and municipalities to do so. As covid cases began to rise, counties across the state, especially Miami-Dade, Alachua and Orange County, found it necessary to take emergency action to stop the full onslaught of the virus. So, on March 24, counties issued stay at home orders. Then on April 1, DeSantis issued a statewide stay at home order only to lift the order for certain counties on April 29, 2020 and later announced plans to re-open the state. Florida would go on to break the U.S. COVID19 record for the most new cases in a single day on July 12, 2020. To date, Florida has had more than 2,245,853 covid cases with 35,307 deaths.

Broward County Mayor Steve Geller was critical of the gov. ’s decision Monday stating that “by virtue of this order…Gov. DeSantis is saying that the COVID-19 crisis is over in Florida.” Miami-Dade Mayor Daniella Levine Cava concurred in her own statement, "I’m deeply concerned by this decision. We are still in a public health emergency and our economy has not fully rebounded from crisis. Fewer than half of our residents have been vaccinated, and we face a growing threat from variants." Critics of the new legislation slated to go into effect this summer contend that the underlying factor is a political one. It is widely rumored that DeSantis has plans to run for president in 2024. Orange County Mayor Jerry Demings deduced that DeSantis’ “actions are part of a larger partisan strategy by the Republican Party to usurp the authority of Democrat-led urban counties and cities across America.”

Next post Rep. Senator Tim Scott defends ‘America is not a racist country’