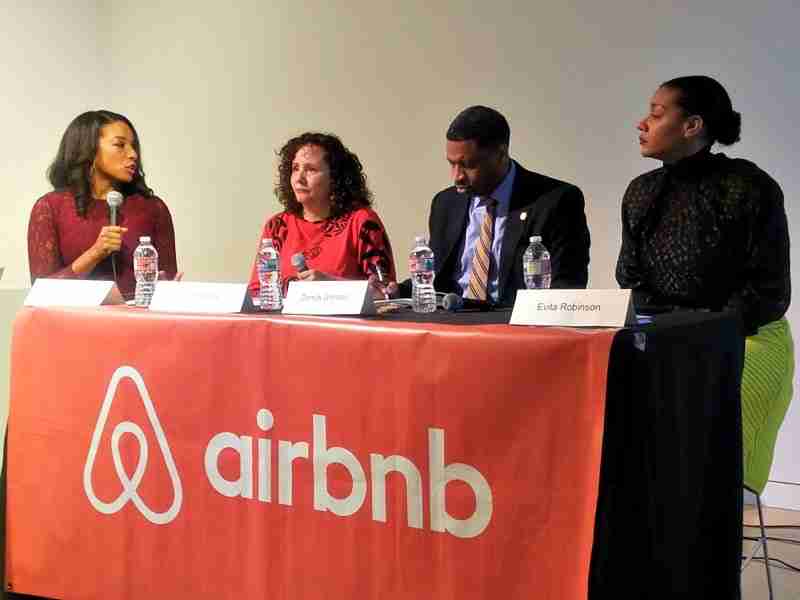 Panelists and guests discuss the opportunities for blacks to participate in the lucrative Airbnb home rental business at an NAACP forum.

MIAMI GARDENS, Fla. – It’s no secret that cities like Miami, Fort Lauderdale and West Palm Beach have become some of the most popular destinations for tourist throughout the world. Now, a national partnership between Airbnb and the NAACP is set to launch right here in South Florida, with hopes of promoting the benefits of home sharing among black residents, while also working to help boost both economic and tourism opportunities in communities of color.

The landmark partnership was announced in July 2017 and will officially launch during a special kick-off event scheduled for Saturday, May 19, from 11 a.m. to 2 p.m. at the Betty T. Ferguson Complex, located at 3000 NW 199th St. in Miami Gardens.

During the event, residents throughout South Florida will have the chance to sign up as a host with Airbnb, find out ways to earn extra income and learn how the multibillion dollar company is taking steps to address concerns related to discrimination and equality.

Representatives from Airbnb and the NAACP, as well as several local elected officials, will also discuss a number of commitments stemming from the partnership, including community outreach and education, revenue sharing and employee diversity.

“Our leadership team recognized that there were still areas that our services were not reaching – specifically in black communities,” said Janaye Ingram, director of partnerships for Airbnb. “This joint initiative was formed after several productive meetings with the NAACP, and together, we are very optimistic that this dynamic collaboration between our two organizations will not only provide stronger economic lifelines, but will also show our continued commitment to diversity and inclusion.”

Founded in 2008, Airbnb is a U.S.-based hospitality service company that utilizes an online digital marketplace for individuals looking to lease or rent short-term lodging. Homeowners list their properties through the company’s online database and have the option to either rent a specific room or their entire home to Airbnb customers for a set fee.

Marvin Owens, senior director of the NAACP’s economic development program, stressed that the partnership is more than just getting people to stay in black neighborhoods.

He also mentioned the benefits of giving more black homeowners the opportunity to earn extra income through Airbnb that can be used for things like retirement, college tuition and monthly expenses.
“Although most tech companies have not done a great job of being inclusive to black workers, statistics have shown that there is much power in the black dollar,” said Owens. “We consider this initiative with Airbnb to be a big deal and look forward to creating more jobs and addressing issues related to poverty, lack of affordable housing and additional economic challenges that underserved groups continue to face.”

The economic impact from Airbnb in South Florida is staggering. Since May 2017, Miami Dade County has received $7.7 million in bed tax revenue from Airbnb, with Broward County receiving approximately $3.3 million.

Funds generated by these tax dollars are typically reinvested by the counties to help promote tourism, host sporting and cultural events, pay for beach renourishment and more.

And the money doesn’t stop there. Last year, individuals who hosted through Airbnb in Miami earned a combined $55 million in supplemental income.

Guests who booked stays in Miami spent an average of $253 per day, according to Airbnb, with nearly 50 percent of spending remaining in the neighborhood in which they stayed.

“Whenever I travel and need a place to stay, I usually look on Airbnb because I know that I will be getting a good deal,” said Kya Williams, a MBA graduate student from Clark Atlanta University. “I’m a huge fan of Airbnb, and I’m glad to hear that the company will be partnering with the NAACP. Hopefully, it will lead to more positive engagement for people who use the service and help stimulate more business in areas that haven’t necessarily benefited directly by tourism.”