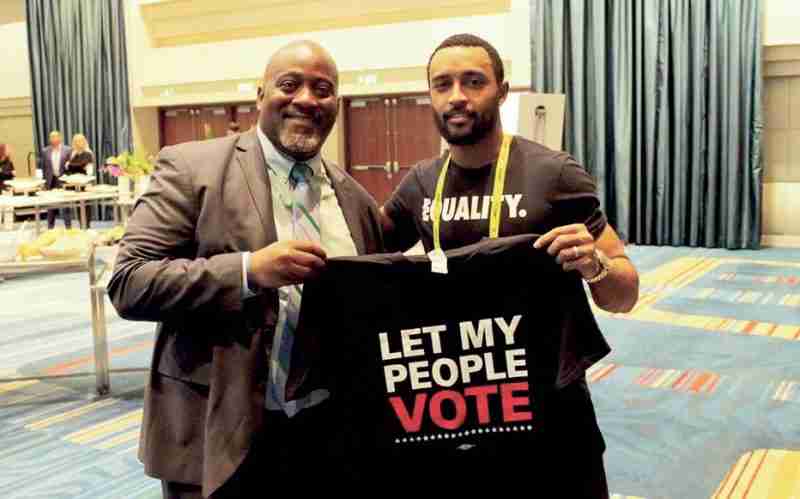 Tallahassee – Just days after Florida Gov. Ron DeSantis won a court victory to keep felons from voting until they’ve paid off ﬁnes, restitution and court fees, billionaire Mike Bloomberg has stepped in to help them pay off the debts.

The former Democratic presidential candidate has helped raise more than $20 million so that felons who completed their prison sentences can vote in the presidential election.

A federal appellate court ruled on Sept. 11 that in addition to serving their sentences, Florida felons must pay all ﬁnes, restitution and legal fees before they can regain their right to vote.

The case could have broad implications for the November elections. Florida has 29 electoral college votes that are crucial to President Donald Trump’s hopes of staying in the White House.

Under Amendment 4, which Florida voters passed overwhelmingly in 2018, felons who have completed their sentences would have voting rights restored.

Republican lawmakers then moved to deﬁne what it means to complete a sentence.

The Florida Rights Restoration Coalition had raised about $5 million before Bloomberg made calls to raise almost $17 million more, according to Bloomberg advisers.

“The right to vote is fundamental to our democracy and no American should be denied that right,” Bloomberg said in a statement released Tuesday.

"Working together with the Florida Rights Restoration Coalition, we are determined to end disenfranchisement and the discrimination that has always driven it.”

The money is targeted for felons who registered to vote while the law was in question and who owe $1,500 or less. That accounts for about 31,100 people, Bloomberg advisers say.

In a state that decided the 2000 presidential election by 537 votes, that could be critical in a year when polls show Trump and former Vice President Joe Biden in a dead heat.

Organizers for the group say they aren’t targeting people registered with a particular political party.

“To hell with politics, to hell with any other implications or inuations, at the end of the day it’s about real people, real lives, American citizens who want to be a part of this,” said Desmond Meade of Orlando, the group’s executive director who led the push to pass Amendment 4.

“People with felony convictions have had their voices silenced for so long.”

When Bloomberg ended his presidential campaign in March, he pledged to spend “whatever it takes” to help Democrats defeat President Donald Trump.

Less than two months before the election, he’s ﬁnally coming through. Facing questions about whether he would fulﬁll his promise, Bloomberg over the weekend moved to direct $100 million to Florida alone in support of Joe Biden.

It’s a massive sum on par with the resources he poured into helping Democrats retake the House in 2018 and could put Trump on defense in a state that is critical to his reelection.

Billionaire donors have long played a central role in supporting both parties. Yet no one has proposed pumping in so much cash to support a presidential campaign in a single state.

Bloomberg’s allies say the investment is in line with his longtime strategy in business and politics: to make the most impactful investment, based on the best data, at the right time.

“He’s looking across the ﬁeld. He takes in the data. He looks at the evidence, does the analysis and then determines where to best have his impact to change the course of an election.

“That’s why he decided to invest so heavily in Florida.”

Bloomberg’s advisers say his Florida investment offers multiple beneﬁts for Democrats: It frees up Democratic cash, allowing the campaign and outside groups to focus on other key swing states; it requires Republicans to spend more heavily to make up for the disparity there; and a decisive win by Biden in Florida could help tamp down efforts most Democrats are expecting from Trump to discount the results of the election.

And Trump has praised Florida’s mail ballot system, meaning if Biden wins there, it will be tougher for Trump to reverse course on the state.

“It’s pretty important for the democracy if Biden does win for us to be able to call Florida on election night,” said Kevin Sheekey, Bloomberg’s longtime adviser.

Still, Bloomberg isn’t necessarily a natural ﬁt to help Democrats. Initially a Democrat, he became a Republican in 2000 ahead of his ﬁrst run for New York City mayor. He left the GOP in 2007 and wasn’t afﬁliated with either party until registering as a Democrat again last year.

He won praise from some Democrats for his work during the midterms and in support of gun control. But his reputation took a hit during his presidential campaign when he faced scrutiny over past comments and treatment of women and Black people along with accusations that he was using his own money to buy the White House.

After spending $1 billion on his own campaign, Bloomberg won just one primary contest: American Samoa.

He received more negative attention after leaving the race for laying off campaign staffers he’d promised to employ through November. And after an initial transfer of $18 million in leftover campaign funds to the Democratic National Committee, many party leaders started to question whether he’d renege on his pledge to spend big defeating Trump as the months ticked down.

His Florida investment has tempered those criticisms, but some privately still grumble that it took him until the ﬁnal months of the race to engage.

“The guy has an ego as large as anybody’s. It took him a while to get his feelings unbruised,” said John Morgan, a major Democratic fundraiser and plaintiffs’ attorney in Florida, who added that Bloomberg nonetheless has the opportunity to deliver a “knockout blow” to Trump if Biden ends up winning Florida.