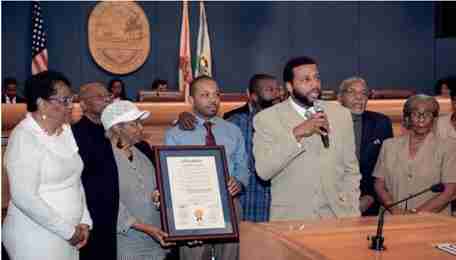 “Melton was not only a jazz legend, but also my friend and a longtime champion of music education in District 1,” Jordan said. “He was a remarkably humble man who was committed to helping youths in the community that he lived in for 45 years. He will be sorely missed.”

His family attended the Commission meeting to accept the sympathy resolution and watch a December 2016 video of his father accepting a proclamation from the County Commission.

“His platform was helping other people. Even though he played with the greats, he was still very humble and loved to help any and everyone,” said his son Melton Mustafa Jr.

After leaving the Count Basie Orchestra, Mustafa Sr. became Director of Jazz Studies at Florida Memorial University (FMU), where he nurtured many young musicians over the years, discovering that educating and mentoring young musicians was one of his greatest passions.