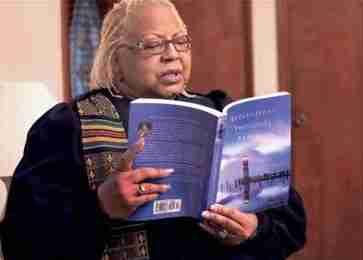 Rev. Verona Hagans Matthews has made history as the first female pastor at Tabernacle Missionary Baptist Church in 123 years.

WEST PALM BEACH, Fla. – Rev. Verona Hagans Matthews had already been voted upon to be on the ministerial staff at the historic Tabernacle Missionary Baptist Church in West Palm Beach when she learned the awe-inspiring news.

“She said to me, ‘You know you’ve made history!’ and I said ‘How?’ and she told me. I was in shock because I had no idea,”
said Rev. Matthews, whom Senior Pastor Gerald Kisner said was a natural fit. In fact there were no plans to even attempt to make history, he said. It just sort of, well – happened. Today she is an associate pastor at the historic church.

“She had been visiting our church on a regular basis, and she was even tithing here before becoming a member, and after she became so involved here, it was just a natural fit, considering her experience, having been a senior pastor elsewhere,” said Kisner, who has been the pastor at the historic church for over two decades.

Matthews foray as the first female pastor on staff in over a hundred years has empowered many women in the church, said Rev. Kisner.

“I believe they feel empowered through her role,” he said. “And it was really something special when she conducted Communion services. We had never had a woman to conduct Communion here before.”

Kisner said it was such an exciting moment and such a big deal that church-goers took pictures and eagerly posted the occasion all over social media.

Matthews, whose humility is striking, takes it all in stride, though she knows she’s made a place in history.

“I’m really honored,” she said in a telephone interview recently.

“When I found out it was history-making, I was forever grateful. Anytime a black woman has an opportunity to do something that’s never been done before, it puts a lot of responsibility on you. I’m able to fill a gap no one has filled before. It’s truly an honor.”

It seems Rev. Verona, as she is called, has made a mark everywhere she goes. Prior to joining the staff at the historic Missionary Church, she also made history at St. Luke’s United Tabernacle Baptist Methodist Church where she was previously senior pastor. She was the first African American pastor in the 50 years of the church’s existence. She was also pastor at Simpson Memorial United Methodist Church.

Matthews is mindful of the barriers she’s broken. For instance, it was a milestone when she wore pants in the pulpit at Tabernacle. She did encounter some resistance from older women, but overall, it was a welcome change by many of the ladies there.

“You’re surprised at some of the barriers you encounter,” she said. But she added she has received so much acceptance by men, as well.

Matthews says she has always lived her life following God’s lead – hence her third book which came out this year was written as a contrast to the “trash” sometimes depicted on social media. It’s a devotional for everyday reading and spiritual growth. “God originally led me to start writing spiritual daily sayings on Facebook because there was so much trash on there and people needed to hear an encouraging word. I wrote so many reflections that I was led to accumulate them and start to put together my third book, but this time a 365-day devotional. When putting all of these writing (sic) in book format, God gave me some poetry which was really surprising since I had never written more than one poem. I ended up writing 20 poems and they are dispersed throughout the devotional,” she said.

Her devotional is called “Reflections, Thoughts, Prayers” and she said the foreword invites the reader to use the book to engage in early morning worship before the noise of the day distracts them from time with the Lord. The benefit to the reader, she points out, is that the devotional emphasizes living a Christian life and allowing the virtues of Jesus to shine through each day. The reflections are daily words of encouragement.

Matthews has held a variety of other positions throughout her years in ministry, including hosting several radio talk shows one of them for 12 years. During her tenure at Simpson Memorial she started a “Love of Reading” program to encourage children ages 5-12 to love to read and she has continued this program at Tabernacle. Rev. Kisner said it’s a valued program offered at the church and is much needed.

Matthews is the wife of Frank Matthews, a mother of three and grandmother of six. For five years, she and her husband owned and operated a preschool, which allowed her to concentrate her ministry’s focus of assisting men, women and children in reaching their full potential as individuals and children of God. She exposed her students, who were primarily low income and high risk, to new places and experiences. She also offered tutoring to the aftercare students who needed it as well as homework assistance. During this time, she taught a class on Day Care Management at Palm Beach State College in Lake Worth Florida.

She has a B.A. degree from Barry University, a M.A. in Ministry from Palm Beach Atlantic University, and completed the 5-year ministerial course of study at Candler School of Theology at Emory University in Atlanta, Georgia. She was also elected to Who’s Who among students in American Universities & Colleges.

She is a renowned speaker for various church denominations and has received numerous commendations and honors. She is currently also President of the CIBs Club of the Palm Beaches, a social and civic club which depicts finer womanhood and specializes in group initiatives which uplift the downtrodden in Palm Beach County.

When asked, “Who are you?” She answers simply, “A child of the living God.”

Next post Indian tribes opt out of federal death penalty