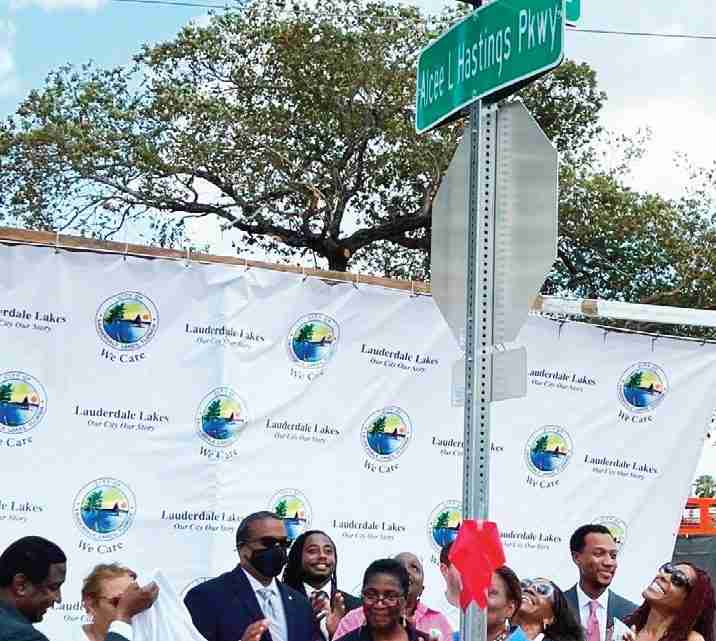 To honor his memory and his advocacy for racial injustice, immigrants and senior citizens, and his achievements in career that spanned more than 50 years, the City of Lauderdale Lakes honored the pioneer by renaming a portion of a roadway after him during a ceremony.

As the representative of the City of Lauderdale Lakes, the city said Hastings was a pioneer who fiercely advocated for the residents since 1992.

He supported the economic vitality of the city and its cultural exchange through the annual Unifest event and advanced the agenda for the area schools and local organizations.

"Congressman Hastings earned the respect and affection of the community throughout his 32 tireless years of public service," the city said through a statement.

Lauderdale Lakes Mayor Hazelle Rogers told the South Florida Times that Hastings’ impact in the community will have a lasting impression.

"It was indeed an honor and privilege to have honored the late Congressman Alcee L. Hastings who represented the City of Lauderdale Lakes within his district for over two decades," she said. "We would like our community to never forget the impact his service and naming this parkway, as a tribute to him, was the least we could do to show our love and respect."

Alcee Hastings II told the South Florida Times he was touched by the honor for his father.

"My father was a strong supporter of the Lauderdale Lakes community and renaming part of Northwest 43rd Avenue in his honor ensures future generations will be inspired and do more great works for those who live here and beyond," he said.

Miami Congresswoman Frederica Wilson, who coudn’t attend the street renaming ceremony because of a prior engagement, said Hastings was a civil rights icon who leaves behind an enduring legacy of activism, action and perseverance.

"As a tireless advocate for his constituents and a champion for equality, it is only fitting that his name be memorialized in the very community that he spent a lifetime defending," Wilson told the South Florida Times.

Elected to Congress in 1992, Hastings served 15 terms in the House, longer than any other current member, making him dean of the delegation.

Many of his colleagues and constituents described him as a strong liberal voice dating back to when he was a pioneering civil rights lawyer during the 1960s and 1970s in South Florida when Blacks faced inhospitable conditions.

During his time in Congress, Hastings was a strong advocate against racial injustice and defended the rights for gay people, immigrants, women and senior citizens.

He also championed efforts for better and affordable health care and higher wages.

Hastings was Florida’s first Black federal judge and among three Black Floridians who reached Congress in 1992, which was the first time Florida had Black federal lawmakers since Reconstruction.

In 1979, he was appointed by President Jimmy Carter to the U.S. District Court for the Southern District of Florida, but in 1981, he became the first sitting federal judge to be tried on corruption charges before the House which subsequently impeached him in 1988.

The Senate convicted him the following year and removed him from the bench but didn’t ban him from running for public office again.

State Rep. Anika Omphroy, whose district includes Lauderdale Lakes and was among to pay tribute to Hastings at the ceremony, said it was an honor to rename the street after Hastings.

"I still can’t believe it’s been a year since our Congressman Alcee Hastings passed away," she said. "How do we say thank you?"