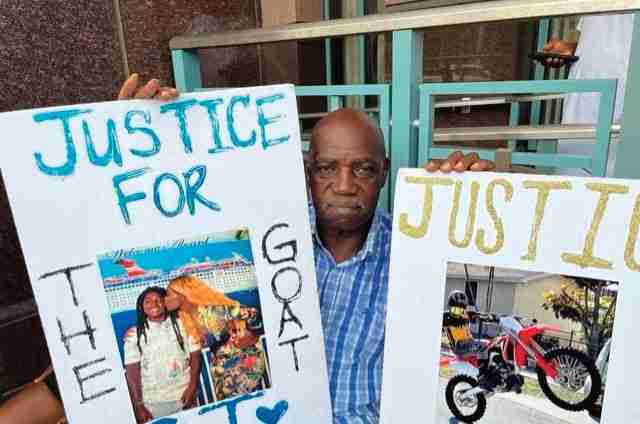 Boynton police ofﬁcer Mark Sohn, however, thus far will not be held accountable for 13-year-old Stanley “SJ” Davis III’s death, the flashpoint for the city’s turmoil.

A Florida Highway Patrol investigation has concluded that Sohn is not responsible for Davis falling off his dirt bike during a reportedly illegal chase day after Christmas last year. A Boynton Beach Police Department internal affairs investigation is ongoing.

But during a news conference outside State Attorney Dave Aronberg’s ofﬁce Monday, the teen’s mother, Shannon Thompson, said her family and the community will not stop until they get justice.

Aronberg told news organizations that he can’t ﬁle charges unless a law enforcement agency sends him a request, which he so far hasn’t received.

But Thompson said her only child is dead and she wants accountability.

“Yesterday was Easter and I didn’t have my child with me,” she stated, holding back tears.

“We’ll be here through rain, sleet, snow, whatever it takes to get justice for my baby!” she said as raindrops descended. “We are not going away!” Graham reiterated those comments, saying Aronberg should be as vigorous in this case as with Nouman Raja, the ofﬁcer who sits behind bars for the murder of church drummer Corey Jones, who was shot and killed by Raja as he awaited a tow truck off Interstate 95 in Palm Beach Gardens in 2015.

“Mark Sohn, in an illegal chase, caused the death of SJ. He must be ﬁred and face charges,” shouted Graham.

After the wet press conference citizens and faith groups held a community meeting to voice their opinions about the sheriff potentially taking over the police department. Some said they consider that possibility and the chief’s resignation to be ploys to deflect accountability.

Rae Whitely, minister and community leader, said they demand three things: justice, transparency and accountability. Whitely said neither Gregory’s abrupt resignation, nor the possible sheriff takeover is going to stop their efforts and their demands for justice for SJ.

Gregory announced his resignation earlier this month to be effective April 22, saying he’s stepping down after four years to focus on other aspects of his life. Angry community members have made Gregory a frequent target of verbal attacks since the dirt bike incident.

the Boynton Beach Coalition of Clergy, and chair of the Faith in Florida Palm Beach chapter, said community members are not moved by potential changes regarding Boynton police.

“We want to communicate to all decision makers that our primary concerns are justice, transparency, and accountability. Nothing has changed with those concerns,” said Dames. “Getting a new police chief or changing law enforcement agencies alone will not come close to addressing the issues we care about the most.”

Herbert Thompson, the child’s grandfather, said Sohn should have been ﬁred long ago. Sohn has been involved in several other incidents involving questionable chases.

Thompson says it’s wrong and he is forever changed. “I miss everything about SJ. Life hasn’t been the same for me,” said the grieving granddad.