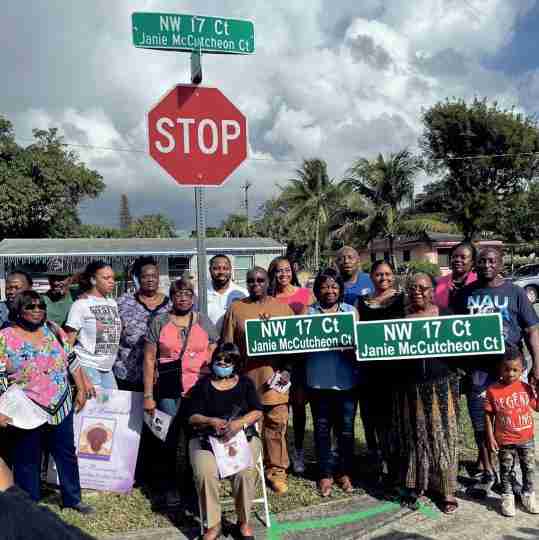 For more than 50 years, the residents of the City of Lauderhill could depend on Janie McCutcheon to get things done. Whether it was her community activism or just helping out neighbors around their homes when they were sick, McCutcheon was always there for her city and her nine children.

For her longtime service to Lauderhill, the city and the West Ken Lark Homeowners Association has renamed NW 17th Court between 33rd and 35th avenues Janie McCutcheon Court. McCutcheon was a longtime president of the association.

Thurston said it was ﬁtting to rename the street where McCutcheon lived for years, always sitting on her porch talking to residents about city and homeowner association issues, or personal issues.

"Her kindness and giving soul were precious," Thurston said. "She had a listening ear and was always willing to give advice to those who needed it."

Thurston, who has been a Lauderhill resident since 1994 and was elected mayor in 2018, said McCutcheon championed efforts for the city to annex the West Ken Lark and John Kennedy Estates neighborhoods 16 years ago. He said it was the biggest boundary expansion in the city’s history.

Thurston said the Broward Sheriff’s Ofﬁce had jurisdiction over the communities before they were annexed, and developers were building homes in the neighborhoods before and during Lauderhill’s annexation process.

"Lauderhill police are more responsive to the needs of the community," Thurston said. "Janie McCutcheon successfully petitioned residents to see if they wanted to be part of Lauderhill. They voted yes at the polls."

Thurston, who’s served on the Lauderhill City Commission since 2010, said he ﬁrst met McCutcheon 40 years ago when one of her daughters lived in the same apartment building.

"She was there visiting and I realized she has a large family and they were active in the community," he said. "I said then that she was a quality person who raised her children to get involved."

Jill McCutcheon, 66, said she was overwhelmed when the City of Lauderhill renamed a street after her mother. She was her mother’s caretaker up until her death.

"I don’t have words but I thank God and Lauderhill for the honor," she said. "My mom lived in the neighborhood the longest it’s truly a blessing for the street renamed after her."

Jill McCutcheon said her parents were born in South Carolina and moved to Pahokee, then Pompano Beach, before ﬁnally settling in Lauderhill in 1964. She said her father died in 1980.

"My mom lived 41 years after my father’s death," she said, and was a homemaker besides being a community activist. McCutcheon said her mother was president of the West Ken Lark HOA for years before she fell ill.

She said she helped her mother petition Lauderhill to give senior citizens a tax break to their ad valorem taxes and place speed bumps in different neighborhoods to control residential speeding. "We walked around the neighborhoods with petitions and got people to sign them," McCutcheon said.

"My mom was a virtuous woman," McCutcheon said. "When our neighbors were sick, she went and took care of them and cleaned their homes.”

Melva Crutchﬁeld, 68, said "It was a wonderful thing they did because my mother deserves to be known for the work she has done for years."

"My mom was a very good woman,” said Crutchﬁeld, who lives in West Palm Beach. “When she saw a need she wanted to be a part of ﬁlling that need."