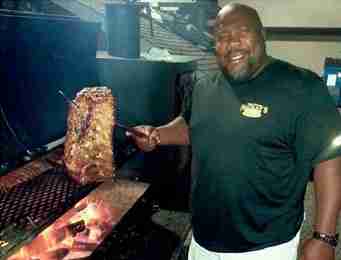 The late Herman C. McCray, Jr. would be proud of his boys. All of them are successful businessmen in their own right, just like him, their beloved father. Herman McCray was one of the greatest entrepreneurs and community leaders in the Riviera Beach and Palm Beach County areas until his untimely death several years ago, clearly leaving a void in city matters and community relations.

But Derrick McCray, owner and proprietor of McCray’s Backyard BBQ with two locations in Palm Beach County has caught the eye of the Super Bowl and the NFL and they’re not letting go of his mouth-watering delicatessens. For an amazing 11th season, McCray is headed to the Super Bowl to prepare his famous foods for NFL commissioners, NFL brass, players and celebrities. He left Monday for Houston for Super Bowl LI, and while there for the week, he will cater private functions for the NFL. His dad lived to see him represent at least seven Super Bowls.

McCray says it’s certainly an honor for his company to take part in the big game, but his relationship with the NFL has now afforded him to make an even bigger difference in the lives of kids –something he’s elated about. This year, for the first time, he was able to take the Riviera Beach Chargers little league football team to the Pro Bowl in Orlando. McCray secured the tickets through his ongoing relationship with the NFL. The entire football team, cheerleaders, and coaches traveled to Orlando to the Pro Bowl Game. The Riviera

The group had the opportunity of a lifetime and got to meet some of the Pro Bowl players during their trip.

“ I want to be an inspiration and give our young boys and girls hope that there is more to life than what they have been seeing. You can go as far as you want to go in life. Teaching life skills. As the saying goes, each one teach one.”

McCray is thrilled his relationship with the NFL is growing beyond catering and is developing into a means of transforming lives – something his father spent his life doing. The elder McCray has a bridge named for him in Riviera Beach –a symbol of his outstanding community service. Herman and their mother Lillian dedicated their lives to helping others. Both passed in recent years.

Derrick McCray says he wants to make his parents proud in carrying on their tradition. “Our goal is to hold on to my Dad’s tradition and legacy. He was here to witness my first seven Super Bowls and that’s amazing,” said McCray. “I’m glad he got to see this happen for our family tradition.”

While in Houston, he’ll get to cater six events for the NFL, and yes, he’ll be given several tickets to the Super Bowl game. “The opportunity is great. And God says that when you’re faithful over a little, he’ll make you ruler over much, ” he added. “This is definitely a blessing.”

McCray says he owes thanks and gratitude to the Player Networking Event (PNE) for his NFL experiences. “I’m very excited and very humbled,and I’m appreciative of the PNE. It says a lot about our quality and integrity that we’re selected each year for these events.

Established in 2000 as a pilot program under the National Football League’s (NFL) Player and Employee Development Department (now known as Player Engagement), PNE stood alone as the NFL’s only officially NFL Sanctioned Event for over 15 years. The event is designed to help active and former NFL players see the value in continuous professional networking experiences. It is supported by NFL Player Engagement, the NFL Players Association and the NFL Alumni.

McCray has become close friends and allies with Guy Troupe, a former long-time NFL executive and founder and executive director of the PNE.

He is also president and CEO of Troupe 21 and Associates.

Troupe first met McCray during a Super Bowl Tailgate Party for the 2007 Super Bowl game in Miami. Lines at McCray’s NFL sanctioned event were filled with players, executives and celebrities waiting in lengthy lines to get his tasty BBQ, brisket and other delights after word spread of how delicious it was. Troupe said he was so impressed with McCray and his company that the two forged a relationship and McCray has been Super Bowl- bound ever since. McCray’s has prepared everything from baby backs, lamb, brisket, smoked turkey and more for special VIP Super Bowl parties and other VIP events leading up to the big game. This year he’s doing six NFL sanctioned events in Houston.