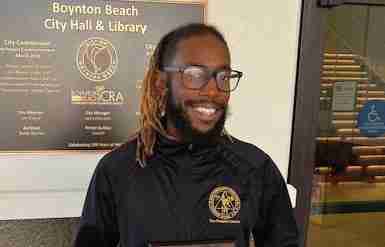 Riviera Beach, Fla. – The Sounds of Success (SOS) Community Marching Band from Riviera Beach has earned a mark of distinction. The small community group is the only marching band from Florida, and one of only two bands in the country, to be invited to London for part of Queen Elizabeth’s sovereign birthday celebration.

The event will take place in 2023, giving the youngsters time to prepare ﬁnancially for the great honor.

Antoine Miller, 32, the SOS founder and president and director of Bands, said he was thrilled to receive the invitation, and that for many of the band members, ages 5 to 23, it’s the thrill of a lifetime.

“I’m extremely excited even to be considered,” said Miller, “considering all the amazing bands from all across the country.”

Miller, a former member of the Florida A&M University (FAMU) Marching 100, said he knows a great band when he sees one, but to be invited above so many others says so much about SOS, which gives community youth a chance even with no band experience.

Joe Wyndham, director of London Band Week, said he has seen a lot of bands during his tenure, but none like SOS.

“We are thrilled that SOS Band has accepted our invitation to London Band Week,” said Wyndham, who discovered the band online.

“There are hundreds of bands in the United Kingdom, and many bands have traveled to London from around the world over the years,” Wyndham said in a statement from London this week. “But none compare to the SOS Band from Florida. The SOS Band has a vibrant energy that is fueled by an unlimited passion for musical performance.

“Their teamwork and unity sings true in everything they do both on and off the performance arena,” Wyndham added. “Up to 10 bands from across the globe will converge on London.”

He said the bands will take in all the sights in historic London, that parades and other appearances will abound during their weeklong stay, and that the Royal Family will be made well aware of their engagements and could possibly be in attendance.

SOS Band parent Crystal Bynes said she couldn’t be more elated, and her three children in the band are beyond themselves with joy over the upcoming trip. Bynes’ oldest child Christopher, 13, who plays tenor drums, said he dreams of making the FAMU Band when he goes to college, and believes this experience will help prepare him in every way.

Bynes said that’s what she wants not only for her children, but for all of the SOS youngsters. “I sincerely desire that this experience will help all of them to reach their goals and dreams,” she said. “This is an amazing opportunity for them.”

Bynes’ son Christopher said it will be his ﬁrst time flying. “I’m very excited!” he said in a telephone interview. “This will help me to reach my dreams.” It will be the ﬁrst time that many of the kids travel outside of their state, let alone the country.

Miller says he expects the cost to be several thousand dollars per child and hopes to take close to 200 youths. They have about a year to fundraise. Although they will do the usual dinner sales and car washes, they are hoping for corprate sponsors and generous donations, he said. But no amount is too small or large, he added, saying they will accept all donations.

To make donations, or for information on sponsorships or the band, contact