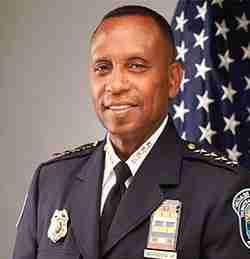 Last August, surveillance video from Lawson’s condominium residence showed the councilman in the parking lot appearing to yank his then ﬁancé out of a car. Elevator footage also appeared to show him hoisting the woman and tossing her over his shoulder in what ofﬁcers say was a domestic dispute. Residents of the condominium were said to have called authorities. Police charged Lawson with domestic battery and detained him.

Osgood overruled his ofﬁcers on the scene, however, ordering his ofﬁcers to “unarrest“ the councilman and allowing him to go free. Lawson and the woman, whom he married two months later, maintained at a news conference that she had drank too much that night, that he was merely trying to keep her from driving, and that no battery or assault was committed.

Last Friday, an Internal Affairs investigation and an independent inquiry concluded there had been probable cause to arrest Lawson. Amid the inquiries the chief resigned. Lawson will not be arrested because his wife is not ﬁling charges. A statement released by his publicist stated:

“In response to the results of the independent investigation released, councilman Douglas Lawson maintained this entire incident is a political maneuver and an effort to embarrass and shame him and his family. It is unfortunate that people’s lives and careers are being impacted. It also does a disservice to the real victims of domestic violence who may be struggling with coming forward and seeking help.”

Lawson went on to wish the chief and his family well. The president of the Palm Beach County Police Benevolent Association, John Kazanjian, countered in a statement that said in part:

“It’s about time! The PBA has always believed that Riviera Beach police chief Nathan Osgood committed ofﬁcial misconduct when he personally intervened and ordered Councilman Douglas Lawson to be ‘un-arrested.’ Accountability starts at the top.”

Kazanjian also stated the chief’s actions were tantamount to a “political favor “ for someone who was up for re-election. Lawson won re-election in March.

Osgood had been chief for less than two years. He previously was a Broward Sheriff Ofﬁce major and was part of the command team overseeing the Parkland massacre.